50 Cent: Blood on the Sand Review

It should come as no surprise to anyone that they made another 50 Cent game. Despite its chilly critical reception, 2005's 50 Cent: Bulletproof sold remarkably well. What is likely to surprise many people is that the new game, 50 Cent: Blood on the Sand, is actually quite good. The fast-paced gameplay, tight controls, and arcade-style scoring system form a solid base for the simplistic yet fun action. Layered on top of this foundation is a heaping helping of 50 Cent and G-Unit flavor; vulgar dialogue, ridiculous one-liners, and a whole lot of licensed music give Blood on the Sand the bravado it needs to stay entertaining when the action begins to wear thin. Neither the action nor the attitude are particularly inspired, but together they are enough to make this an enjoyable ride.

The premise and story serve as little more than a backdrop here, but that's just fine. 50 Cent and G-Unit play a concert and get stiffed by the promoter. Hoping to avoid Fiddy's wrath, the promoter offers them a BeDazzled skull. Everyone's happy until the crew is ambushed and the skull is stolen. It is then that you commence shooting anything that moves. 50 and his chosen G-Unit companion (Tony Yayo, Lloyd Banks, or DJ Whoo Kid) traverse a war-torn urban Middle Eastern landscape, slaying countless goons while pursuing one criminal figure after another. Though there are a few vehicle segments to vary things up, most of the locales kind of blur together in a blend of gunfire and earth tones. Regardless, they are impressively detailed and do a solid job of setting the stage for the explosive action.

50 Cent: Blood on the Sand is a third-person shooter, so you'll be running and gunning with your overly muscled character in full view. The only differences between characters are aesthetic; both 50 Cent and his G-Unit sidekick run at a good clip and can dive in any direction. They can also snap into cover with the press of a button, but this mechanic is a bit too sticky to be convenient. Fortunately, you'll rarely have to use it. Your character is very durable, and when things do get hairy, you can take advantage of the gangsta fire mode (read: bullet time) that makes it easy to lay out a squad of enemies in seconds.

The action is smooth and the controls are responsive, but it begins to feel repetitive after a while. There are a few bells and whistles to spice things up, such as counterkills, which are brutal quick-time melee attacks in which your character pummels, perforates, or otherwise brutalizes an enemy. However, the big incentive to keep playing is the scoring system. Every enemy that you kill earns you points, and killing them in quick succession will get a multiplier going. Additionally, you earn bonuses for the manner in which you dispatch your foes; scoring a headshot or taunting your enemies after you kill them will further boost your score. Even if you're not the kind of gamer who normally strives for high scores, Blood on the Sand's scoring system has a way of sucking you in. Your multiplier and kill bonuses are displayed prominently onscreen, and this visual reinforcement spurs you onward, motivating you to kill your enemies harder, better, faster, stronger.

To further quicken the pace, timed scenarios appear on the screen occasionally and challenge you to accomplish certain objectives within a certain time period. Target enemies are outlined in red, so you'll always know who they are, and completing scenarios will earn you souped-up rounds for your pistol and extra grenades. Red danger arrows also appear to steer you toward the action by indicating where your enemies are about to come from. When there is a lull in the action, you can busy yourself with hunting down collectibles that will boost your score significantly (five posters and five targets in each mission). There are also loot crates that earn you cash to spend on new guns, counterkills, and taunts. Between your score, timed scenario announcements, your health meter, the gangsta fire bar, danger arrows, your cash total, and your kill multiplier, the heads-up display can get very crowded. It manages not to intrude on the action overmuch, but it can be distracting, especially in this day and age when the minimalist HUD reigns supreme.

Nevertheless, this bustling HUD somehow fits well into the blustering swagger of 50 Cent: Blood on the Sand. The game is saturated with overblown gangster bravado, and it matches the over-the-top action perfectly. From the cutscenes in which 50 Cent vows to kill almost everyone he meets to the vulgar (and often amusing) banter between characters, it just doesn't quit. The only place vulgarity is omitted is in the unlockable music videos, which are incongruously censored. Fortunately, the music tracks are not. As you progress and unlock new songs, you can tweak your playlist in the pause menu. 50 Cent and G-Unit songs make a great backdrop for the action and really tie the whole package together.

Blood on the Sand is better enjoyed with a friend, and the well-implemented drop-in/drop-out Cooperative mode is a solid addition. It's easy to let people join your game, and just as easy to keep them out or boot them should they become a nuisance. Whether you play solo or cooperative, you'll get a solid 10+ hours out of the campaign, in addition to any high-score runs that you attempt for the sake of making the online leaderboards. The run-and-gun gameplay isn't particularly inspired, but the scoring system adds enough to keep you engaged. The pervasive attitude is so excessive that it borders on parody, but when underlaid with a robust offering of authentic songs, it works surprisingly well. This isn't the best action game you'll play this year, but that doesn't mean you won't have a damn fun time playing it. 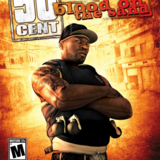