Admittedly, more multiplayer and career options would have been nice, but in a game focused directly at fun-seeking race fanatics, what's present is ample enough.

If the Dreamcast lacks one thing, it's arcade-style racing games. While Flag to Flag, Monaco Grand Prix, and Sega Rally offer varying degrees of arcade excitement and simplicity, no single title exists that fun-loving racing fanatics can sink their teeth into. Seeking to fill this void, Midway is serving up thrills, spills, and spine-tingling off-road chills with its release of 4 Wheel Thunder.

Right from the initial menu, you can see that 4 Wheel Thunder is aiming for a more simplistic balls-to-the-wall racing experience. The pseudo-television-style menus offer you only four choices: practice, arcade indoor, arcade outdoor, and championship. If the game were a sim, such lack of choice would be a death knell. However, for this style of game, these offerings are more than enough. The indoor circuit offers six levels, and the outdoor circuit offers ten, while the championship mode combines them into a single linear "go for the cash" racing quest. At the outset, there are only eight stock vehicles available, ranging from monster trucks and buggies to jeeps and quads. If you are successful in the championship mode,you can unlock quirky secret cars and upgraded versions of the game's stock vehicles. Have you ever thought to put a cow or pig behind the wheel? Welcome to the attitude behind 4 Wheel Thunder.

Track design reflects this skewed attitude as well. While the initial indoor oval and outdoor dirt tracks put up a front of normalcy, later tracks just throw reality out the window. Early tracks are mostly circular, with an ample number of curves and hairpins. Later levels feature a multitude of forks and shortcuts, which will either make you feel as if you're playing a new level each time or or throw you into endless fits of befuddlement. Splattered about the landscape are volcanic plumes, rock slides, dark caves, frozen ponds, and high-flying jumps. Countering the frenzied pace and twisty courses, the developers have placed arrows in a variety of locations to keep you on track, but following them is about as easy as capturing flies with chopsticks on a humid Louisiana afternoon.

The game itself plays as you would expect: constant acceleration, bouncy handling, and shortcuts galore. Each vehicle can reach speeds upward of 120mph, while turbo boosts and later upgrades can bring this number up to nearly 200. Due to the staggered start and unforgiving AI, using the upgrades and shortcuts is required. While the initial difficulty level is a bit on the high side, a powered-up vehicle evens the odds considerably. Because of this, 4 Wheel Thunder is definitely one of those titles where greater playing time results in greater enjoyment. Push to shove, 4 Wheel Thunder is akin to a merger of LucasArts' Pod Racer and Midway's Off-Road Challenge, with a pinch of Hydro Thunder sprinkled in. Arguably though, the control is altogether too bouncy, and the matrix-like boost-pill power-ups get tiring long before the first race's timer is out.

Should you tire of the game's single-player offerings, you can play each of 4 Wheel Thunder's main activities with a friend. An additional special mode menu also offers four play modes for two-player combat: bomb, bomb race, balloon, and tag battle. In bomb mode, you've got explosives strapped to your car, and you must transfer them to your opponent's vehicle by ramming it. Bomb race is similar, except you must pass your opponent within a certain time or risk requisite demolition. In balloon mode, you must collect color-coded balloons to gain more time during the race. Win the race or collect the most balloons, and you win. Tag-battle rounds out the two-player offerings with the stereotypical playground game of avoidance-style tag. While these two-player selections help diversify the game, they're not really all that complex. Furthermore, the lack of four-player combat really limits the potential replay value inherent in these multiplayer modes.

Developer Kalisto has always been known to turn a trick or two when it comes to graphics, and with 4 Wheel Thunder, the company continues this reputation. Courses are gorgeously detailed, with a wide array of jumps, shortcuts, rock formations, fences, grassy areas, weather effects, and an assorted background object or two. Waterfalls flow, leaves sway, and the occasional airplane or Macy's balloon even flies by for a cameo. Car models are also exceptionally detailed, right down to a variety of exhaust pipes, roll cages, oversized tires, and team stickers. Truthfully, better windshield-reflection mapping would have been nice, and there's a bit too much fog in the two-player modes, but otherwise, 4 Wheel Thunder nearly equals Crazy Taxi in terms of visual quality. Most importantly though, the frame rate remains high - easily 60fps - and never stutters.

Similar to the graphics, 4 Wheel Thunder's sound isn't too shabby either. The catchy and upbeat background music tracks and jarring racing effects sound too real for their own good. Engine noises are testosterone-inducing, crash sounds are physically impacting, and power slides sound as dirty and gritty as a romp in the Baja. Had Kalisto only included more environment sounds and a wider variety of effects from car to car, this game would be oozing with perfect aural ambience.

If you don't mind a high initial difficulty level and a bit of fog, the sheer overall quality level, fun factor, and multimedia experience of 4 Wheel Thunder make it a no-brainer for arcade racing lovers. Admittedly, more multiplayer and career options would have been nice, but in a game focused directly at fun-seeking race fanatics, what's present is ample enough. Those deeply addicted to Hydro Thunder may find themselves underwhelmed, but for everyone else, 4 Wheel Thunder is a breath of fresh air. 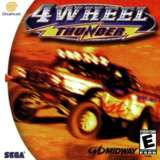 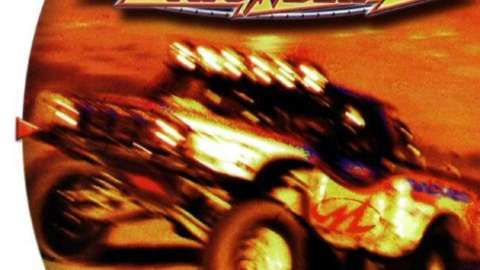 Admittedly, more multiplayer and career options would have been nice, but in a game focused directly at fun-seeking race fanatics, what's present is ample enough.