This is by far the best-looking baseball video game to date.

Sony's Pennant Race has the options, Sega's World Series Baseball II has the control, EA's Triple Play has the looks…but the realism and play of Crystal Dynamics' 3D Baseball will make players want to shove the others aside.

This is by far the best-looking baseball video game to date. Crystal Dynamics' "Real Motion Capture" does wonders with the appearance and feel of the players: They swing, run, throw, and pitch like human beings. The pitcher hunches over for action after the throw, stands up on the rubber, looks down, and shakes his arm just like a real pitcher. When a batter strikes out, he pounds the plate with his bat. If an outfielder has a tough throw to home, he'll grunt as he releases. The controls are fairly easy to learn, especially if you've played video game baseball before. And despite some jerky movement with the fielders (you'll have to keep tapping up and back to get in the right place), it's a breeze.

Another outstanding feature is the crisp and clear voice of the announcer, CNN sportscaster Van Earl Wright. No digitized hiccup, no delay, no annoying loading during the game. Wright not only remembers a player's performance record, he actually refers to a player in more than one way. For example, the first time David Justice comes to bat, Wright says, "DJ - David Justice!" The second time, he says, "Daaaaaaaaaaaavid Justice!" And when (if) Justice strikes out a second time, he says, "Get a clue - you struck out again!" Supplementing Wright's commentary are the little tidbits of information about a batter when he steps up to the plate (led the league in walks in '93, is hitting .056 with runners in scoring positions, and so on). Fantastic!

3D Baseball does have a few drawbacks, noticeable to both casual and die-hard fans of America's favorite pastime. Most notably are the absences of Major League Baseball teams or logos (Wright has to refer to the Yankees as "New York A."). In addition, players can only take the field in four imaginary ballparks (it should be said, however, that they all look good). The game also lacks all-star, home run derby, and playoff modes. For players who can tolerate these shortcomings, 3D Baseball should prove to be their best diamond run on the Playstation. And if Crystal Dynamics can update 3D Baseball with all the licenses in place, there's little doubt that this game will become the new king of the ballpark. 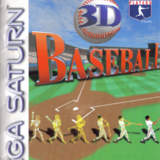 3D Baseball is an excellent rookie attempt, and future updates could easily become contenders for the MVP award.