30XX is a strong tribute to classic action platformers with a dash of Rogue.

When you die in 30XX, thus bringing your run to a premature and perhaps permanent end, there's a good chance you will receive a message from the Bureau of Encouragement. In a roguelike platformer where death can feel like a crushing setback or at best wasted time, you would be forgiven for expecting to find comfort in such a message. A consoling pat on the back, some inspiring words, or at least a sliver of hope. You would be wrong. "Ooooh! So close…" says the Bureau of Encouragement. "Just kidding. That was terrible!"

I received a lot of messages from the Bureau of Encouragement because I died a lot in 30XX. But the Bureau was not the only regulatory agency to contact me in the aftermath of my demise. The Failure Board and the Department of Aggravation also got in touch to register their contempt at my performance. "Remember, you can stop whenever you have given up hope," they laughed.

Despite their derision, I pressed on. Much like the classic action platformers from which it draws heavy inspiration, 30XX is a game in which defeat is never an ending but rather an opportunity to start over and try again. A roguelike structure is a smart complement to this life-death cycle and positions 30XX--even in its Early Access state--as an accomplished title, worthy of comparison to its 8- and 16-bit forerunners.

In a nutshell, 30XX is procedurally generated Mega Man. You run left to right, jump, shoot and slice your way across a series of themed 2D platforming worlds, taking down a boss at the end of each level. Moving through these areas feels great, thanks to precise and responsive controls. Actions like dash-boosting a jump to clear a larger-than-usual gap or sliding down a wall to adjust the timing of the next wall jump, for example, quickly become instinctive, erasing any additional barrier between you and obstacles ahead. When you die yet again you'll be cursing your own ineptitude rather than any sluggish movement or control issues.

The procedural nature of the levels is derived from the way pre-made "chunks" are shuffled and randomly combined to generate the world ahead. It's not quite the case that when you commence a new run you will find yourself facing a fresh challenge as, chances are, you'll encounter chunks that you've seen before. Though I don't know exactly how many chunks are in the currently available pool, my experience was that they seemed to repeat quite often. I suppose the idea is that even if you have seen the individual chunks of a level before, you won't have experienced them assembled in this particular order, and in my time at least, that seemed to be the case.

Given that just three chunks comprise each level, however, hitting a repeat chunk does mean that an awful lot of the level of your current run will be familiar. At first I found it a disappointment to happen upon the same area. Here we go, I'd feel my shoulders slump, it's the one with lots of falling crystal spike traps above a sequence of tiny platforms again. But many runs later that initial dismay had subsided, replaced with an eagerness to bound through a chunk I now knew well and a determination to hone my mastery of the level, ensuring I arrived at the boss with full health for the best possible advantage.

30XX benefits from the procedural generation of its levels across two game modes that both incorporate roguelike elements in different ways. Both modes allow you to keep all your gear, currency and upgrades between runs. The difference is, when you die in Standard all the levels are rerolled, while in Mega your progress persists. Standard is actually the more challenging of the two in that it forces you to beat the whole game in one life while in Mega Mode you're able to cling to small feats of progress.

I played a lot more of 30XX in Mega Mode than in Standard. This is because, as I may have mentioned, I died a lot. And, despite the best efforts of the Bureau of Encouragement, I found myself far more inclined to hit restart knowing I was now armed with greater knowledge of what lay ahead. In doing so, I was able to appreciate that each death was but a scouting expedition to precede my eventual success.

Just as there are two game modes with distinct takes on the same premise, there are two playable characters offering their own particular approaches. Broadly speaking, Nina uses ranged weapons (her gun is even referred to as a buster) while Ace relies on melee. This difference necessitates the deployment of new strategies for even the most basic of enemies, transforming what may be a fairly straightforward section with one character into a fraught challenge with the other. Alone, this would be reason enough to warrant completing a full run with both characters. But the contrast between the pair runs deeper to include the types of powers they accrue, as well as the way you have to manage the energy required to use those powers. This ensures the two characters are unique and swapping between them for a new run feels meaningfully different.

To my surprise, there is a cooperative mode where a second player can join. I couldn't find another player online whenever I tried the network option, but I was able to test local co-op (with player 1 using a pad and player 2 on keyboard) and was even more surprised at how well it worked. Impressively, when the two players became separated, the screen would smoothly zoom out--often displaying a ridiculous amount of the level at once--to keep both characters in frame, even if they were now barely a handful of pixels tall. (Don't worry, things aren't so tiny you can't see what's going on, and there's absolutely no reason why players need to remain so far apart for any length of time.) The only letdown is that it doesn't seem possible--at least at this stage--to import an already upgraded character as the co-op partner.

There's also a level editor to allow players to design their own chunks of a level and share them with the community. It's pretty easy to use and already comes with a clear and concise tutorial. Level design is not my forte, but I was able to build a very simple chunk with a few obstacles in just a few minutes. What happens to these chunks once created was less clear. I was able to browse other players' creations in the chunk catalog and download and play any I wished, but I couldn't work out if it was possible to play through a whole run of player-created levels. Enticing as it may sound to have your own chunk added to the rotation for others to encounter in their Standard Mode run, this doesn't appear to be the case, though who knows what future updates in this area Early Access may deliver.

To that end, there's a clock on the 30XX title screen counting down the time to the very second until the next update. The next few months, though perhaps not the very next update, will see the welcome addition of Leaderboard play with seeded daily and weekly runs, according to developer Batterystaple Games. Over the course of the planned year-long Early Access period, two new worlds and bosses, plus a ninth final stage, will be added to the existing half-dozen, along with new but yet-to-be-detailed items, powers and systems--all of which is not just reassuring but hugely encouraging for the game's future prospects.

Bearing in mind what's still to come, 30XX is nonetheless off to an excellent start. It's already a thoroughly enjoyable homage to the likes of Mega Man or Turrican, with tight controls and polished character design securing the foundation and a roadmap to version 1.0 promising a steady supply of new content. I wouldn't hesitate to start your run now, no matter what the Bureau of Encouragement might say to the contrary. 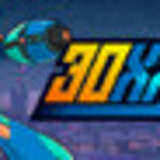 David Wildgoose still has the 5.25-inch floppy disk of the original Rogue he used to play in the mid-'80s. He played 30XX on PC with a Steam key supplied by the developer.