18 Wheeler American Pro Trucker on the PlayStation 2 looks a bit more polished than the Dreamcast version, but much like that game, it is too short to hold your interest for very long.

Mixed among the Virtua Fighters and Daytonas, Sega sometimes has a tendency of releasing rather quirky arcade games--18 Wheeler American Pro Trucker is one example. The arcade version, with its large steering wheel and horn, high/low shifter, and the realistic bounce of the sprawling bench seat, was relatively entertaining. But naturally, those bells and whistles aren't available in the home version of the game, and what's left is a shell of a game with very little replay value. 18 Wheeler American Pro Trucker on the PlayStation 2 looks a bit more polished than the Dreamcast version, but much like that game, it is too short to hold your interest for very long.

Like the Dreamcast version, 18 Wheeler on the PS2 has four primary modes of play. They are arcade, parking, score attack, and versus. The versus mode is rather self-explanatory; you and a friend can race head-to-head to determine who's first to deliver the cargo. In the score attack mode, you must earn as much money as possible while racing three laps around a course. Preserving the cargo from taking damage, wrecking bonus cars, which are dispersed within the traffic, and defeating the rival driver can earn you money.

The parking mode, like all the other modes in the game, has four different courses and asks you to carefully maneuver through tight tracks and park the truck in designated garages. You must park the truck in five different garages in each level within a limited time period. Finally, the arcade mode, which is also the game's most robust gameplay mode, asks you to deliver a variety of cargo from New York to San Francisco, with four different stops in between. As with the score attack mode, the objective is to defeat the rival in each section and deliver the cargo by taking the least amount of damage. In this mode, you'll find yourself avoiding traffic and other obstacles, searching out shortcuts, and trying to stay ahead of the faceless rival.

In 18 Wheeler, the rival AI is generally stacked against the player, because the game uses a rather apparent rubber band AI. If you fall too far behind the rival, he will virtually stop and wait for you to catch up, and if you motor ahead, he will use unrealistic speed boosts to pass you. This can be frustrating at times, because no matter how skilled you are at the game, it is impossible to leave the rival behind. He is always there to cause havoc and can ruin a perfect race by causing pileups or simply running you off the road.

However, the primary issue with 18 Wheeler isn't the game's AI. Rather, it's the general pace of the game. Because you're driving bulky 18-wheelers, the gameplay speed is naturally quite deliberate. The game's dawdling pace worked in the arcades because of the novelty of the arcade cabinet, but on the console platform the game's slow pacing and repetitive style quickly become tedious and boring.

On the visual front, 18 Wheeler American Pro Trucker on the PS2 is only a marginal improvement upon the Dreamcast version. The textures are cleaner and the game runs at a higher resolution, but there are still relatively major issues with pop-up and draw-in. For example, in the game's final level, which is set in San Francisco, as you approach a replica of the Golden Gate Bridge, the entire structure draws in, as you can't see even 20 feet ahead of you. These are issues that should have been addressed on the more powerful PlayStation 2 console.

Still, the game isn't a slouch visually. The environments in 18 Wheeler are nicely detailed, and the player's field of view is generally cluttered with traffic, buildings, mountains, bridges, and other ambient objects. The primary rigs, which range from fuel tankers to log trailers, also have a good amount of detail--smoke will bellow out of the head exhausts when shifting, and in the cockpit view, you can see such subtle details as road maps on the dashboard and swinging medallions on the rear-view mirror.

The music in 18 Wheeler matches the game's demeanor quite well, even if there really are no memorable songs in the game. But it is the sound effects that can become rather annoying. There are only a handful of phrases that the truckers will say during the course of any run, and after a while, they start to repeat quite frequently. You might find yourself turning down the game's sound effects after hearing phrases like "When you're hot, you're hot, baby" or "Oh, no! What have I done?" for the umpteenth time.

As arcade ports go, 18 Wheeler American Pro Trucker is a rather halfhearted home conversion. There really isn't much to do in the game. The arcade mode can be completed in a matter of minutes, the parking mode, although challenging in the final level, can become repetitive, and there really isn't much gameplay depth in the score attack and versus modes. If you are truly interested in driving monster 18-wheelers through traffic-filled highways, then the game might be worth renting. But in general, given its lack of depth, it is safe to stay clear of 18 Wheeler American Pro Trucker. 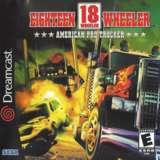 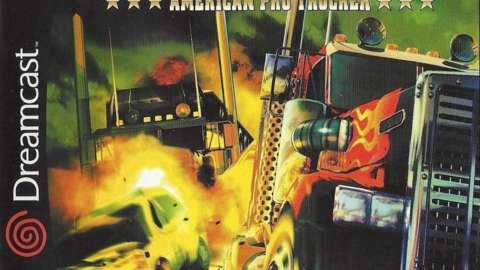