Great design and atmosphere make this game about Caribbean colonization one of the better city builders to come down the pike in some time.

Based on the date, the galleon on the box cover, and the pirate craze that's taken over pop culture thanks to a certain Captain Jack Sparrow, it's easy to think that 1701 A.D. is about flying the Jolly Roger on the Spanish Main. So you might be crestfallen to hear that this is actually a historical city builder that concentrates on the economic side of developing Caribbean colonies at the dawn of the 18th century. But even though that description sounds a bit blah, this sequel to 1503 A.D.: The New World and 1602 A.D. is more than just an economic simulation. Developer Related Designs has put a little too much emphasis on combat, but has balanced depth with such a great interface and a tremendous ease of play that this is still one of the most lively city builders to hit the PC all year.

The key is simplicity. Instead of going crazy with so many features and details that you get lost in micromanagement hell, 1701 A.D. is centered on the straightforward job of keeping colonists happy with necessities and creature comforts. So while you have an involved task ahead of you and must colonize numerous tropical islands, build houses and other town infrastructure, gather and produce resources like wood, fish, alcohol, bricks, gold, and jewels, and even set up island-hopping trade routes, the bottom line is always to make sure that citizens pay their taxes with a smile.

Best of all, you can't get lost in menus and spreadsheets (there aren't any), or ever reach that point where you're scratching your head over why the heck your homes aren't developing or your factories aren't working. There are four great tutorials here, and the basics are laid out so simply that it's easy to see at a glance what's wrong. Also, the game steps in with feedback that sets you on the right path during those rare moments when you can't immediately figure things out. It's been a long time since we've seen a city-building sim so free of finicky bits.

Much of this is made possible by the excellent interface, visuals, and sound. The game sports a clean, attractive look that lets you zip around the maps and zoom in on the 3D tropical paradises to check on your residents. Giving the people what they want is always easy; all you need to do is click on a house to see the face of a homeowner. A quick glance at his expression--laughing and jovial when things are going great, scowling when they're not--tells the whole story about your performance as head honcho, and the adjacent progress bars indicate how desires for specific products are being met. If this isn't good enough, you can also listen in for comments from the peanut gallery, which are always informative, if awfully repetitive. Hear "Our settlement is something to see!" or "What a wonderful day!" a lot, and you know you're on the right track.

You start with addressing essential needs like community, food, cloth, and faith through erecting buildings like town centers, fish farms, sheep farms and weavers' huts, and chapels. Meet these desires and the people will be pleased, which will result in both them and their buildings evolving to new social ranks (you start with pioneers, then move to settlers, then citizens, and so on) that bring with them demands for more luxurious items like education, tobacco, chocolate, and alcohol, and the ability to build new structures and facilities to provide all of these products.

Of course, if this was all that 1701 A.D. was about, the game wouldn't be particularly challenging. Thankfully, there are real obstacles to setting up a colonial empire in both the primary continuous mode of play, which is best described as an open-ended campaign, and the 10 one-off scenarios with specific goals like finding a lost ship or impressing a pirate captain. The most notable wrinkles in both modes of play are the islands themselves. They have limited types of resources, so you have to pick and choose a starting spot to set up, and then branch out elsewhere to access other necessities. Generally, you start off looking for a jack-of-all-trades island with plenty of basics like fish stock, good soil for grain, and maybe a clay pit, then head elsewhere as your colony develops a taste for the finer things, like booze and smokes.

This is where things get difficult. Since most islands permit the cultivation of just two or three resources, you need to sail all over the map in search of some goods. Maps are randomized at the start of each continuous game, but there always seems to be one vital resource that is impossible to find. One match it might be hops. The next it might be honey. At any rate, you can bet that by the time you find this missing link, a rival will have already set up shop next to it and won't be pleased about you horning in on the action.

You see, you're not the only European power colonizing the Caribbean. Competition is intense, and you need to race enemies to resources and slap up market buildings that stake your claim to all of the goodies in the surrounding area. Inevitably, either you or one of your foes is going to wind up in a position where a vital resource can only be accessed by an act of war. It generally doesn't take more than a few hours before you run into an enemy with control over some key island, like the only convenient one where you can grow the cane fields needed to make the booze that keeps your settlers too loaded to consider revolting. This is unfortunate, as military matters are the least compelling aspect of the game. Ship battles are simplistic, ever-turning affairs no more involved than what was depicted in Sid Meier's Pirates!, and land warfare is all about hurling units like pikemen en masse at enemy buildings. There is a diplomatic option, but efforts there are often wrecked by rivals who seem predisposed to hostility.

So the end result is that you have to put your dukes up a fair bit. That's a real shame, because 1701 A.D. does economics best, and the switch from ploughshares to swords is extremely jarring. Continuous mode campaigns are more enjoyable while they're still all about economics, which means that you wind up sort of dreading the moment when you have to move in on the turf of a rival like the pirate boss Carmen Marquez and spark the arms race that gets the fighting started. A more preferable option here might have been to keep combat at arm's length, and perhaps include a military advisor demanding money and resources for troops and ship expenses. This would have met historical realities and gotten the military into the picture, yet still kept the focus on the economics, where it clearly belongs in this sort of game.

You have to suspect that battles would be a big part of the two-to-four-player competitive multiplayer mode of play (just like continuous solo play, but with human opponents), given the typically heightened competition whenever you go online. But that remains a question mark, as there doesn't seem to be anybody playing online right now. Servers were deserted through the first week the game hit stores, although this could be chalked up to apparently limited distribution in the early days. This is the kind of design that should work very well in multiplayer, however, barring any technical problems or other issues.

More of a lighthearted look at the age of exploration than a hardcore economic simulation, 1701 A.D. still has plenty of character and depth. It's not going to set the world on fire with innovations, but it has a fantastic interface, is very catchy, and boasts loads of charisma, even without any piratical yo-ho-ho-ing. 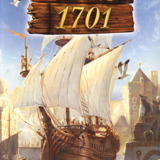