1602 A.D. captures the feel of the historical period very well and carries you along without the extreme highs and lows that characterize more fast-paced and violent games.

Ever since SimCity virtually invented the god-game genre over ten years ago, gamers have been creating worlds and populating them, and then manipulating the environment to help their charges grow and prosper. Taking its cues from games such as The Settlers, Caesar III, and SimCity, 1602 A.D. combines god-game and real-time-strategy elements to create an interesting blend of real-time and city-building gameplay.

1602 A.D. is the North American release of a game that came out in Europe last year under the title Anno 1602, which was developed by the German firm Sunflowers. However, despite being essentially the original version of the game with a handful of additions (an included expansion pack, a couple of new building structures, supposedly improved artificial intelligence, and a scenario editor), 1602 A.D. is not just an afterthought release of some obscure European game. In fact, Anno 1602 is the best-selling game ever in Germany and has sold more than a million copies worldwide. As such, you might expect a radical new twist in the gameplay, but 1602 A.D. simply takes the tried-and-true real-time god-game formula and applies a bit of European sensibility. That is, the game is slower, less violent, and more cooperative, yet it still inhabits familiar territory.

Despite its historically allusive title, 1602 A.D. is set in a fictitious universe with no direct connection to the colonization of the New World. However, the game has a strong historical flavor, as it opens with the establishment of a small colony on an island that develops much like an early-17th-century town. Adding to the atmosphere is the game's pacing, which is very relaxed. There are several speed settings, but even at faster speeds the game moves along somewhat uneventfully unless you're drastically mismanaging the situation. It's this slow pace that will likely determine whether you like the game or not.

The gameplay proceeds along well-worn lines. You're charged with building and maintaining a colony on a previously unexplored island. The maps consist of approximately fifteen or twenty islands in a vast ocean, and competing players settle, develop, and expand their holdings in the hope of building a prosperous settlement in the New World. You initially have one ship with enough tools, wood, and food to get a foothold on one island. Once there, you must construct buildings such as fishing huts for food, foresters' huts for lumber, and various farms for wool and cattle. The objective is to eventually build as large and prosperous a colony as possible, so you'll need to build homes for your settlers. As the colony expands, the inhabitants will demand such things as schools and taverns to let them keep growing. Settlers progress through various states of development, up to the highest level of "aristocrat." The more advanced the settlers, the more they want. Eventually you'll be building cotton and tobacco plantations, churches, colleges, and theaters, as well as shipyards and armories. The relationships between the colonists and their buildings can become rather complex, and managing them efficiently is the point of the game.

1602 A.D. can be played in several modes, including continuous play, individual scenarios, and multiplayer. Continuous play is the familiar, open-ended mode in which you start with a ship, settle an island, and subsequently develop your colony through various stages to a thriving 18th-century metropolis while protecting yourself from marauding pirates and overly aggressive neighbors. Continuous-play games have no set ending point, and the mode continues essentially until you become tired of the game. On the other hand, scenarios require you to reach a certain goal, such as having a certain number of aristocrats in your colony.At first the scenarios seem as though they would be more limiting (and thus less interesting) than the continuous game. But in fact, it's the continuous-play mode that feels limited because it plays very similarly each time, at least through the opening phases where the nature and order of builds are fairly predictable. The familiar opening game gives the continuous-play mode of 1602 A.D. a sameness that doesn't appear in the scenarios, which place you in a wide variety of situations each with a definite goal to be achieved.

Trade is absolutely crucial in 1602 A.D. It is simply impossible to meet all of your citizens' demands with the resources of a single island, and by the time you find you can expand to another island, the settlers on the first island will be in an advanced state of development and will demand goods the newly settled island cannot hope to provide until much later. Thus, establishing trade routes is vitally important, and managing the routes demands constant attention. If you happen to colonize an island with a native population, you can trade for goods such as spices and tobacco by overland routes using covered wagons. However, it is generally necessary to begin trading with other players from the very early stage of the game. The interface allows for some automation of trading, so that once a good source of a certain item is found, ships can be assigned to ply that route continuously as long as there are goods available for purchase. Even so, the changing demands of your populace will require that you restructure a colony's trading arrangements. Thus, trade is another facet of the game that needs constant monitoring, especially as the inhabitants become more advanced and demand more and more luxuries to keep them satisfied.

While there are military units in the game, combat is not the focus of 1602 A.D. Because it is so difficult to invade and conquer a well-prepared neighbor, military strength becomes a way of ensuring a settlement's security rather than a means of threatening other players. This is where 1602 A.D. resembles a god game far more than a traditional real-time build-and-conquer game. Properly managed, a powerful military might never need to be used. This is not the case in some of the scenarios, where military action is the only way to achieve your objectives, but this is the exception rather than the rule. Those who enjoy building a large invasion fleet and annexing their neighbors won't have a good time trying to do so in 1602 A.D. On the other hand, if you're interested in a slightly more mercantilist depiction of society, you will enjoy the predominance of building and trade.

1602 A.D. has an extensive tutorial that does a decent job of explaining some of the basic game concepts, and the manual is passable, but there is a lot to the game that isn't apparent on first examination. This issue is compounded by the lack of any overall summary screens to organize the vast amount of information that you're faced with. There's some information on the game's web site that should have been included in the documentation. And while the interface makes manipulating game functions fairly easy, it's less effective for information management. Though you'll have the power of an all-knowing deity, you'll be forced to work hard for your omniscience.

While it can't boast innovative design or unusual gameplay, 1602 A.D. has a peculiar charm all its own. The game captures the feel of the historical period very well and carries you along without the extreme highs and lows that characterize more fast-paced and violent games. Those who prefer to play action-packed computer games will be disappointed by 1602 A.D., but if you're looking for a more relaxing game, you'll find a pleasant diversion in this engaging colony builder. 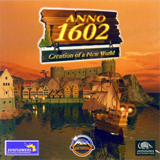