12 Minutes is a point-and-click adventure in a clockwork world that's as expertly crafted as a Swiss watch.

12 Minutes is the time-loop story reduced to its very essence. It is spare in length and small in scope, taking place almost entirely within a one-bedroom apartment. But that smallness contains narrative and mechanical multitudes that pay off consistently over the course of 12 Minutes' six-hour runtime.

I say "almost entirely" because, as the game begins, its unnamed protagonist (voiced by James McAvoy) rides the elevator up to that apartment. The hallway between the elevator and the apartment door--eerily carpeted with the autumnal pattern from The Shining's Overlook Hotel--serves as a brief tutorial: learn to navigate from the game's top-down perspective, find a fake rock in the potted plant outside the apartment, use the fake rock to find the key within, take that key and use it on the door. It's a short but effective introduction to the point-and-click-style mechanics on display here. 12 Minutes is mechanically rich because it leans into this old school kind of adventuring that encourages creative thinking. There aren't many objects in the apartment, but those that are there can often be combined in fun and surprising ways.

Once inside the apartment, our protagonist is greeted by his wife (Daisy Ridley), who has set out some fake candles, prepared dessert, and wrapped a present. It's a romantic evening, but there's a storm brewing just outside. That weather event--which your character will take note of if you interact with any of the windows in the apartment--is a fitting metaphor for the turn your pleasant evening is about to take. Midway through dinner, a mysterious man (Willem Dafoe) shows up at the door, claiming to be police. You can let him in, or wait for him to kick down the door. No matter what you do, he will enter your apartment, bind you both with flex cuffs, and kill you. Then, the loop restarts and you're stumbling into your apartment, warmly lit for that romantic dinner you'll never get to finish.

The apartment is small--believably so, in a way that fictional apartments rarely are--and is composed of four rooms: a primary space which does triple duty as living room, kitchen, and dining room; a bedroom; a bathroom; and a coat closet. There are a few items that seem to have obvious utility, like a knife on the counter and a bottle of sleeping pills in the bathroom cabinet. But most exist in an intriguing gray area. Is there any reason I should study the framed art prints on the wall? Does this dessert exist only to be eaten? Could the book on meditation that the wife is reading possibly have any purpose beyond characterization? In a traditional point-and-click adventure game, these questions could easily lead to annoyance, the kind of frustration that comes from trying every item on every other item until something finally works. I never found myself giving into this impulse while playing 12 Minutes. The environment is so small and well-considered, and loops so brief, that I rarely went longer than a few minutes without thinking up something new to try. The top-down perspective reveals an environment that is so small and starkly empty that, as each new layer of the story is unveiled, it almost feels like magic. Wait, there's more? In this one bedroom apartment? That I've scoured every inch of? How?

12 Minutes is mechanically rich because it leans into this old school kind of adventuring that encourages creative thinking.

12 Minutes' use of lighting contributes to this feeling. At one point, the bedroom might be brightly lit. Enter again, and the room has gone dark, with blue, nocturnal tones. Later, it's bathed in an eerie red. This dynamism helps to sell the idea that this small space contains multitudes. Just as there are new shades revealed through shifting light, so too are there shades to this story. They have always been present in the 12-minute loop but can only be discovered by tilting your head in a new direction, focusing your vision on a neglected, dusty corner.

There are similar shades in the performances from McAvoy, Ridley, and Dafoe. That celebrity lineup helped gain this indie game outsized attention, but the Hollywood stars never felt like a distraction and their strong performances imbue the game with unexpected poignancy. As the protagonist, McAvoy has the bulk of the lines, and he does a good job selling his character's desperation in the face of unbelievable events. The story takes surprising, wrenching turns and McAvoy sells the emotional anguish of his protagonist, while also hitting the necessary light notes in smaller moments. Ridley, similarly, sells us on her character's shock and anger, while also managing to be playful when the script calls for it. And Dafoe is believably menacing as the "cop," though his performance, too, contains depths that are revealed slowly over the course of a playthrough. There are real moments of sadness and pathos here. The trio could have easily felt like distracting stunt casting, but each brings real commitment to the material.

You may have noticed that none of these characters have names. Though the intruder and the wife are characters, they are also objects to be played against other objects, items to be used to potentially break the time loop. Because of this, some of the turns that the story takes can feel a little contrived, as though developer Luis Antonio is making do with limited toys in a tiny toy box. There are only so many configurations this trio of characters can take and, as a result, I found myself mixed on the shocking twists the game moves through on its route to the conclusion. That said, while the landing may be a little shaky, the journey there is well worth taking.

Warren Spector, director of Deus Ex, has said that he would like to make a game focused entirely on one city block because the small space would allow for unmatched mechanical depth. 12 Minutes reduces Spector's scope further, and finds a rich vein for interaction and storytelling. This game may limit its loop to 12 minutes, but I found myself wishing I could stay for much, much longer. 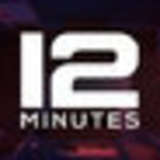 Andrew played six hours of 12 Minutes, eventually breaking the loop. Code was provided by the publisher.