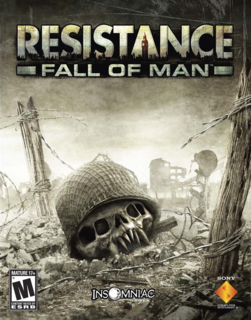 Fall of Man. Rise of Hale.

You play the role of Sergeant Nathan Hale; the one-man-army who manages to all but single-handedly turn the tide of battle wherever he may go. Why's That you ask? Well that's because most all those who join alongside you in battle are killed within moment's of their arrival. It sort of gives the sense in that: your allies are nothing but mere cannon-fodder.

The AI can definitely give a decent challenge, and the fact that some of them can shoot through walls doesn't help either. However that can be countered with the fact that you sometimes get to the kind of location where you can slowly snipe the cooling tubes off of your foe's back, all the while hearing them utter deformed curses at you.

-Gameplay: It truly has fun gameplay; whether it's throwing a Frag Grenade off of a doorway into a room crowded to the breaking point with Hybrids, to randomly shooting the Hailstorm off of a corner hoping you're hitting something and not just alerting the AI of your presence, to shaking of a randomly sneaky Menial using the Sixaxis functionality, and throwing down a Back-Lash Grenade and watching as the Chimera that see you start their own moronic suicide's.

-Graphics: It has great graphics for being a first generation title, are rarely has any frame-rate problems. While it generally has the Artistic style of most WWII Shooter's, it show's off it's own flair whenever in a Chimeran Facility or when using their own weaponry against them. The general colour palette fits well with the setting, and sets a proper mood.

-Sound: It has good sound in most instance's from: The sound effect's like when you hear the bullet's hitting right beside you when you duck for cover. to the clanking of metal against metal if you manage to duck behind a plate once a spike-mine gets set off, and to the hearing of your own foot-steps in an eerily quite facility moment's before being ambushed by a plethora of Chimera. To the musical score; which is a good one, when it either comes to setting the appropriate mood for War, to surprise attacks, and even for moment's where it may make you jump from your seat, as in the Cheshire Tunnel's.

-Value: The game is of good quality, and will likely become a discounted "Greatest Hits" title in due time, thus increasing it's value. So if you like the FPS genre, and aren't deterred by getting ahold of an older title, or you just want to play one of the good Playstation 3 launch titles, this should atleast make your try-list.

-Tilt: I found it to be a fun and immersive game; occasionally letting myself get dragged into the the game's world: either on purpose, or by accident (like in the Cheshire Tunnels). The fact that your allies die within moment's of you meeting them adds to the sensation that you're a one-man-war-machine, and the rather large armory that you carry around with yourself helps to enforce this feeling. It gives you a feel of dread for moving onto the next room, hoping that you may come across some "Human-Shields", only to be met with a small army of Leaper's chasing you though the former corridor's as you try to shake them off, to the feel off curiosity through the Intelligence Reports you find scattered all across the many battlefields.

I truly found this to be a fun game, and am still enjoying it whenever I play it. I honestly hope that they would make a sequel for it at one point or another.

All-in-all, Insomniac has created a fun and immersive Universe in this game.
Load Comments (0)