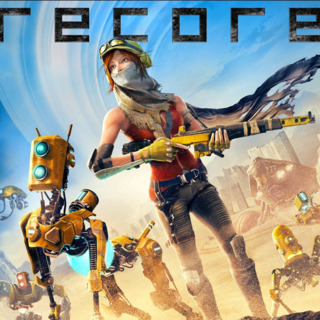 When I first heard about ReCore I loved the idea. It sounded like a game that is right up my alley, but the reviews when it first came out were pretty disappointing. Since it was poorly reviewed I held off on buying it. A few months later the game was on sale for $20 and I learned of a possible update that fixed a lot of it's issues, so I went ahead and picked it up. I held onto this game and when the definitive edition was released, I figured it was time to start it up. I put about 30 hours into this game and I think I have a fair bit to say on this game.

First and foremost, the game still has bugs. It is disappointing, but I didn't encounter anything game breaking. The best examples of bugs were a situation where I couldn't shoot and where I got stuck behind a glitched shield toward the end of the game. I was killed one time during combat and when the game loaded back up Joule was aiming the gun, but couldn't shoot. I had to go back to the title screen, but when I did it cleared it up. Later on in the E-Tower you encounter situations where you have a battle in a shielded room. I got killed and then when I went back to try again, the shield was still up and I couldn't get in. I went back a few jumps to a previous check point and this reset the fight and I was able to progress and complete it. Not a big deal at all. Other bugs were very minor, like where I seemed to walk through a fast travel station or where I got pushed up into the ceiling through a closing door, only to fall out on the other side after a few steps and progress like normal. Weird bugs yes, but overall not bad and they should not deter you from playing the game.

I really enjoyed the combat in this game once I got into a rhythm with it. Once you have all the corebots and you learn which ones you like, combos become fun and easy to build. I really figured out how to handle some of the high level bosses with ease once I figured out how to chain corebot lethals with switching corebots. It is a lot of fun to chain these combos together and take out some of the harder enemies in big combat situations and I often left these encounters with a sense of fulfillment. That being said, bosses can be tough and a little crazy at times. Some of the main bosses require you to do a core extract on them, which can be hard when there are a lot of enemies attacking you. The game seems to jump in difficulty pretty quickly, so the best advise is to take your time and level up, which you can do by checking out the dungeons.

I read a lot about how the game was before the definitive edition update versus how it was after. Suffice it to say, I wouldn't have liked this game in it's initial state. You can only have 2 corebots with you at any time. Fortunately, the fast travel stations not only help you cross the map more easily, but also make it so you can switch out your companions whenever you need to. Fast travel stations also allow you to easily manage your inventory by sending everything into your main storage. Fast travel stations are plentiful and make exploring the map more enjoyable and less of a chore.

Load times between map sections and fast travel are fairly long, but they aren't too bad. When you die, you essentially respawn instantly and you can get back into the fight or start a platforming section over quickly and easily. I died a lot (especially in the platforming areas), but the quick load times made it bearable. Prior to the update, I would have gotten fed up and walked away because there were 1 minute load times between deaths. I wasn't the biggest fan of the platforming dungeons, but I enjoyed the adventure style and combat dungeons quite a lot. For some reason, my favorite of the platforming dungeons were in the E-Tower.

The story in this game is brief, and the quick story missions make you want to power through the game quickly. The game is best enjoyed collecting prismatic cores and enjoying the various dungeons to buff your characters. The game no longer has a major requirement on prismatic cores at the end. Prior to the update, you had to collect them all to finish the game. After the update, you are able to finish the game with 30. I got 48 prismatic cores just checking out various dungeons and collecting the ones around the map on my own time. The stronger your characters are, the more effectively they will help you in combat, so that gave me incentive to check out more of the dungeons. Later in the game, you are able to switch your corebot's frames, so you can put them in the different frames and try out different lethal attacks and the like. Core fusion allows you to buff your corebot's damage, lethals, and defense as well. Core fusion is critical for late game success, which the game doesn't explain well in the early stages. Upgrading your corebots is fun too as there are various different frame augments that change the appearance and add various status, strength, and defense effects.

All in all, the game is quite fun albeit buggy even since the definitive edition was released. If you are thinking about picking this one up, I highly recommend it. It's combat, corebots, platforming, and dungeons are all quite fun and you can actually get to the last boss without collecting every single prismatic core.