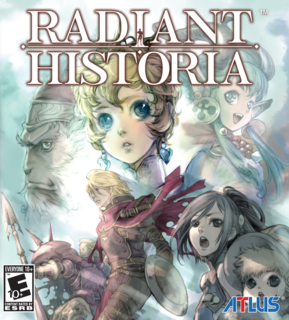 Radiant Historia is a unique, engaging RPG that shines shines bright despite its flaws.

User Rating: 9 | Radiant Historia DS
By turtlethetaffer | Review Date: January 13, 2012
Hi, I recently finished Radiant Historia, and I'm here to tell you what I think about it.

Graphics: The graphics are a throwback to old school 16 bit era RPG's. There is a liberal amount of color, and the sprites are pretty well detailed. The game also has some solid animations, especially during battle. Characters move in anticipation of attack, as well as enemies. Speaking of which, there are some cool enemy types in this game. This game does have a pitfall, though; the enemies become pallet swaps of each other after a few hours of playing. When you revisit areas, there will often times be a different colored (albeit more challenging) version of an enemy running through the field. This is really the only graphical flaw, though. Attacks are flashy, animations, as stated before, are highly detailed, environments look great (and the art style makes it pretty easy to determine what can be interacted with and what can't) and the framerate holds up very well. This is one of the best looking 2D games ever made. 9/ 10

Sound: The sound in this game is pretty much perfect. The sound effects are fun to hear (if a bit cartoony) and the music is extremely well done and great sounding. There isn't a huge amount of music, but what is here is undeniably fantastic. There are always multiple layers to it, and you can tell there was a lot of effort put into making it sound good. Even the normal battle music (which is repeated throughout the game) never really gets old and can make your blood pump. The best tracks are probably during the boss battles; they start out slow, with some percussion, then pick up the pace with an overlapping violin that sounds beautiful. So, while this game may not have the biggest variety of music, this is a case of quality over quantity. There is not a bad sound in this game. 10/ 10

Story: The continent of Vainqueur is in a pretty dire situation. Two of the major kingdoms are warring, causing major casualties on both sides and more than a bit of political intrigue. Meanwhile, an apocalyptic force known as desertification (guess what it does!) is an ever looming threat. This is a unique world; technology known as Thaumatech allows for devastating weapons of war to be made, princesses wield guns that can fire energy beams and two different races of half beast- half human creatures are struggling to survive. The protagonist of the story is a young man named Stocke. He is a part of the Special Intelligence group for the Kingdom of Alistel. One day, he is given a mysterious book known as the White Chronicle by his superior, Heiss. When he goes on a mission that goes awry, he uncovers the truth behind the book. This book allows for the wielder to travel through time and alter the course of history. Stocke uses the book to avert disaster (his two comrades, Marco and Raynie) are killed and he barely manages to survive. After retrying the operation, and succeeding, Stocke has an offer made to him by a close friend of his, Rosch. (Who has a Thaumatech arm in place of his left one after losing it in battle.) Either he can join Rosch's brigade, or he stays with Heiss. And it is here that the story really begins. You see, there are two different stories going on at once in this game, starting with your choice of whether to join Rosch or stay with Heiss. The timeline splits, and, while there are the same characters used in each timeline, the stories are very different and become increasingly more complex and compelling. To go into any major detail would risk spoiling it for you; I'll just say that not everything is what it seems, and there are several great twists in each storyline. The characters are also worth noting. Even minor ones who are only in the story for a chapter or two are given a lot of development, enough for you to care about them. (There are some unexpected deaths and betrayals.) The dialogue is also well written, although it can get somewhat long winded at times. Also worth noting are some of the themes present here. Things like racial discrimination, religious corruption, the morality of "the good of the many outweigh the good of the one", and death. Lots of it. Needless to say, the story is very compelling and worth seeing through to the end. 10/ 10

Gameplay: This game is, in many ways, just a traditional JRPG. You wander around, fight monsters, gain experience, go through dungeons, do sidequests, etc. However, it is in the execution of these aspects that makes the game so brilliant.
First, I'll talk about the most obvious unique mechanic. The time travel system. The White Chronicle will record important events as they happen, and especially important ones are called Nodes. From a save point, you can access Historia (a realm outside of time) and travel back to a Node at your leisure. The dual story concept is also put to heavy use; for instance, in one part of the game, in one of the timelines, you must sneak by a seemingly impenetrable guard force. At the moment, there is no way for you to sneak by. You would have to be able to literally turn invisible. However, there is someone in the other timeline that can teach you how. These moments are plentiful in the game, and it kind of makes the game more linear than it appears to be at first. There is no way to progress without obtaining these, which forces you to play through more of the other timeline. This isn't necessarily a bad thing, though. As stated above, each story in the timelines are worth seeing. There are also many, many times where you must make a decision about your group's course of action. There is always only one right answer, and one wrong one. This kind of shatters the illusion of choice, but it's still fun to see failed chocies and see how it affects the game. (more often than not a major character is killed or the world ends. That's right.) One of the bad things about this, though, is that there are times where there is no clear solution to what you must do. You have to just stumble onto the solution, which is a bit disappointing. (Twice I had to consult an FAQ.) The feature is well implemented for the most part, but not perfect.
Another thing about this game is the combat system. It's far from traditional. For one, you can see the enemies on the field, so there are no random encounters. Second, the battles can only loosely be called turn based. I say this because, on the top screen of the DS, the turn order is shown for the next ten moves. Depending on your party's stats, you may all attack at once or be spread out. You will want to attack all at once, though. The battleground is split up into a 3 by 3 grid. Essentially, there are 9 squares the enemy may occupy. Depending on the enemy type, they may occupy only one square or several. In order to get the best possible rewards and highest amount of experience, you need to build up Combos. Basically, you move the enemies around the field so that they are grouped together, enabling you to do more damage to more enemies at once. Each character has certain, useful abilities. For instance, the leading man Stocke is good at moving enemies around the field with his many different directions of slashes. It is immensely satisfying to group an entire party of enemies together, after building up a big combo, then taking them all out at once, often times with a magic attack. You will, more than likely, find a team you are comfortable with and stick with them. However, it is very fun to experiment with different tactics. Also worth noting is the game's difficulty. It is spot on. It's not overly difficult, but you need to remain on your toes if you hope to survive and come out on top. Most boss battles are very winnable, but only through smart use of your Skills and having the right strategy. This makes every battle interesting, even though it can get tedious to fight the same formation of enemies multiple times in a row. Even so, this combat is much, much more involved than your typical JRPG's "spam attack and magic" battle system.
Outside of battle, there are many sidequests for you to beat, many of which affect the outcome of the ending. These also suffer the directionless flaw; there are many times where the solution is some obscure thing that must be done at a very specific time. Even so, the quests are fun and interesting.
Not everything about the game is perfect. As required by the story, you do a lot of backtracking and going through the same areas. I mean A LOT. It's kind of disappointing that the world isn't bigger with more places. Also, throughout the story, you are limited to certain areas. This severely limits any exploration. Again, this is one of the disappointing aspects of the game.
Outside of all of that, there are some pretty standard JRPG traditions in place here, such as status ailments, buying the latest equipment, buying helpful items, etc.
Overall, the gameplay is great, but no without flaws. 8/ 10

Radiant Historia is a unique, hidden gem of a game. Many people will overlook it, and I can't tell you enough to not do that. The graphics are great, the music is phenomenal, the story is fantastic and the gameplay is great fun. Despite the fact that there are some pretty standard JRPG mechanics here, the game feels unlike anything you have ever played. The comparisons to Chrono Trigger are not unfounded. Like that revered classic, this game deserves to be held high with the all-time great RPG's. If you have even a passing interest in the game, buy it. You will discover a unique masterpiece that will captivate you despite any flaws it may have. The story, soundtrack and battle system make this a game too good to pass up for any RPG fan, or anyone who just loves a good game. So long and thanks for reading.
Load Comments (0)