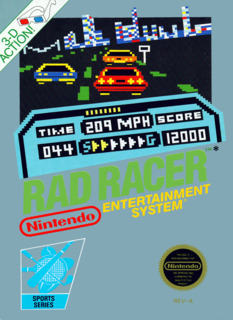 Even though I didn't have the 3D glasses that came along with it, this game was still great.

User Rating: 8.5 | Rad Racer NES
By 76850392 | Review Date: March 9, 2011
Back when I was little, I remember one time my older cousins and neighbors would come to my house to play this game. My older cousins were "Jamar" and Robert (we called him "Robby" instead). My neighbors were Daryl (we called him "Skeeta" instead), "Justin", and "Eric". They were all impressed by the music of the game, the graphics, and sound effects. Later on, I would be impressed too. I first came across this game from Abram and Derek; I saw them play this game first.

Story: N/A
- There is no story. This is just a plain old game of "race to the goals."

Gameplay: 8/10
- The idea of Rad Racer is to race around a course, and make it to check points before the fuel runs out. If a player hits another vehicle, road sign or tree at a high speed, the car crashes. Crashes take time and make it more difficult for the player to reach the check point. There are eight different levels of requiring increasing skill. Even if time runs out, the vehicle can continue to coast for awhile; if the vehicle reaches a checkpoint before running out of momentum, the game continues. Rad Racer came packaged with 3D glasses, which could be worn to give the player the illusion of three dimensions. You could activate the 3D mode during play by pressing the "Select" button. So the gameplay was pretty tight!

Graphics: 9/10
- The graphics are amazing! I especially like how the game's sky changes from day to night and night to day while you are enjoying the race.

Sound: 9/10
- The sound effects were incredible! You could not forget that sound of your car going faster and faster, the slamming on the brakes, and the sounds of the car flipping in the air and crashing on the ground for five times. How the music kicks in as you progress through the race is also unforgettable!