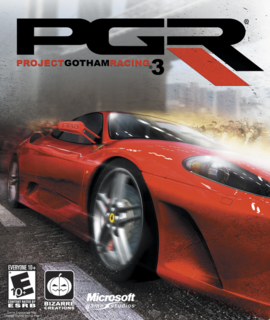 User Rating: 8.9 | Project Gotham Racing 3 X360
By Benny_is_here | Review Date: February 25, 2006
Bizarre Creations have come up with yet another graphical showcase on Microsoft’s console. Hours and hours of footage and hundreds of pictures made it possible for them to create photo-realistic vehicles and environments. The game features 80 licensed supercars and the environments span over Tokyo, New York, London, Las Vegas and Nürburgring. The soundtrack features songs from genres like Hip Hop, J-Pop and even Classical. There’s the online play you could find in PGR 2 and even an online career. The off-line Career includes 23 different championships, with many of the modes you’ve come to know from previous PGR titles. Cone Challenge, Overtake, Speed Camera and new modes like Breakthrough (timed checkpoint races, similar to Tollbooth races in Need For Speed Most Wanted), Drift Challenge (earn enough Kudos by drifting in a very limited amount of time) and Time VS Kudos (racking up Kudos stops the timer) challenge your racing style, how well you handle oversteering and so on.

However, when comparing these numbers to that of PGR 2, you’ll find these numbers are far from an improvement. They’re actually a step back from the 100+ vehicles, 100+ tracks and huge off-line career found in PGR 2. The soundtrack is also significantly shorter than the 200 songs found in PGR 2 and there are no radio stations.

Then what makes this game worthwhile, you ask. Well, it’s that this game oozes of quality, and it does feel like you are driving these supercars in real life. 80 cars seem like a small amount, but every car is high-end, and in the beginning you get to choose between cars like Ultima GTR (my pick) and Chevrolet Corvette C6. There are also some impressive concept cars, and car enthusiasts will be positively surprised to see cars like Nissan GTR Proto, Ford Mustang GT-R and the Ferrari F430.

There’s also the new cockpit camera. In this view, you’ll se your motion-captured hands work the steering wheel and gear, and (if you’re using a car where you can see this) you’re feet working the brakes and throttle. It’s all really realistic, and you’ll see any buttons or screens you would see if you were driving the cars. There are also realistic shadows and you’ll see the dirt or any damage on the front window. You can use the right thumbstick to look around in the cockpit and look in the mirrors, as the regular rearview mirror is removed in this view. The mirrors are realistic too, but the draw distance is much lower. The camera shakes and you’ll see how the G-forces affect your view, which makes it very intense at times. Some of the tracks are bumpy and fast, and in cooperation with the cockpit camera makes for a great sense of realism. If only there were any steering wheels available for the Xbox 360 yet…

The sense of realism is greater enhanced with the authentic engine sounds. You’ll definitely hear the difference between a Ferrari F50 GT and a Shelby GT500, and the sounds change according to which camera you’re using.

The cars also handle different. Not necessarily realistic (you’re brakes don’t lock up, for instance), but it definitely feels as it.

Your cars get damaged and scraped, but not necessarily realistically… The damage is only cosmetic, though.

The online play is also good. There’s very little lag, except for some rare occasions where your opponent will disappear and re-appear or bounce a little. There’s a great chance of hurting your rep, as other gamers will mistake competitiveness for anger, but I’m guessing it’s not the game’s fault. There’s a cool Gotham TV, where you can see the best of the best or your friends in action, just like if you were watching a replay of yourself. The online career is pretty much like a set series of sessions, and is a good place to make cash and Kudos. It is pretty short, though, and it would be nice with more events based on the lesser classes. It will probably be updated though, and the same goes for new content like cars and tracks. The car classes includes D, C, B and A. A is the highest-end, with cars like McLaren F1 LM, and D is the lowest, with cars like Ferrari 355 GTS.

As you make money you can buy cars. I know, pretty obvious... However, there’s no system that limits you from buying the best cars early in the career. You never win new cars to buy or own, except for 10 of them who are unlocked by reaching Ranks by getting enough Kudos. If you keep your starter car, which is definitely possible as the game seem to change your opponents according to your own car, and rack up 1 200 000 Credits you can buy ANY car available. The problem is, almost all of them are available, even top cars like Lamborghini Muciélago R-GT and McLaren F1 LM.

When buying your car, you can choose to view cars from a specific manufacturer, cars priced under 100 000, cars in the 100 000 – 200 000 price range, cars priced over 200 000 or cars that you can afford. After your selection, a list of cars will show up. By using the triggers you can sort by name, price or performance. When browsing the list of cars, you’ll see stats like Horsepowers, Torque, Top Speed and Drivetrain as well as meters displaying Drifting, Top Speed, Acceleration, Braking and Grip. You’ll also see Gotham Sport Comments next to the car. The comments describe how well it drives, how easy it is on the player and some facts regarding its history. This can be helpful because when the game sort cars after performance, they don’t put into consideration how easy the cars are on the player, like oversteering and overpowering. When you buy a vehicle, you have to choose one color for it; the color cannot be changed without buying the same vehicle again. As you get more cars you’ll also get new garages. These are all photo-realistic, and a nice feature lets you walk around your garage and see how the sunlight hits your car. This really shows off what a graphical wonder it is, and how it’s more than you would expect from a launch title. You can also move cars around garages if you like sorting your cars, or move specific cars in or out of the sunlight. There's also two arcade machines in every garage, one with Geometry Wars (from PGR 2) and one with a trial version of Geometry Wars 2

Another nice feature is the new Photo Mode. Photo Mode lets you take your own screenshots when watching a replay, viewing your garage(s) or in a race. In Photo Mode you can walk around and really take a closer look at objects and environments. By doing this I’ve found hidden pictures of what I believe are the guys that made the game, seen old cabs parked between buildings and more. The cheering crowds and some of the objects aren’t that graphically impressive when up close, but you won’t notice it when doing turns at 150 MPH, especially not with the game’s gorgeous motion blurring.

Yet another new feature is the Route Creator. There you can make your own checkpoints and do as the title says: create routes. The Creator is limited though, and the walls made by the Creator are harder to see and often badly positioned.

There’s a series of badges you can earn in the game, as well as Xbox 360 Achievements. The Xbox 360 Achievements includes reaching Rank 5, Rank 1, owning every Lamborghini in the game, owning every Ferrari in the game and completing the off-line Career mode in Steel, Bronze, Silver, Gold, and Platinum. The Badges includes having a car collection worth 1 million, earning your first Platinum medal and buying every car in the game. There seems to be a problem with the “Own Every Car” Badge, as I own every car, but I haven’t gotten it. I’ve checked for missing cars or duplicate cars several times, but I truly have every car. It would be nice with an option to only show cars you don’t own, as spending money on a car and then finding out you already owned one is a real pain in the you-know-what….

The latest in the PGR series yet again show off impressive graphics, but it does fall short on length. The Medal system (Steel, Bronze, Silver, etc) helps give the game replay value, and you rarely use the same track more than once. The authenticity shines through, and makes you want to experience the intense racing over and over again. It’s also every car enthusiast’s dream, thanks to many concepts cars that’s never been in any game before. Racing fans have to be crazy to sit this one out!
Load Comments (0)