He is my Santa Claus and my Savior 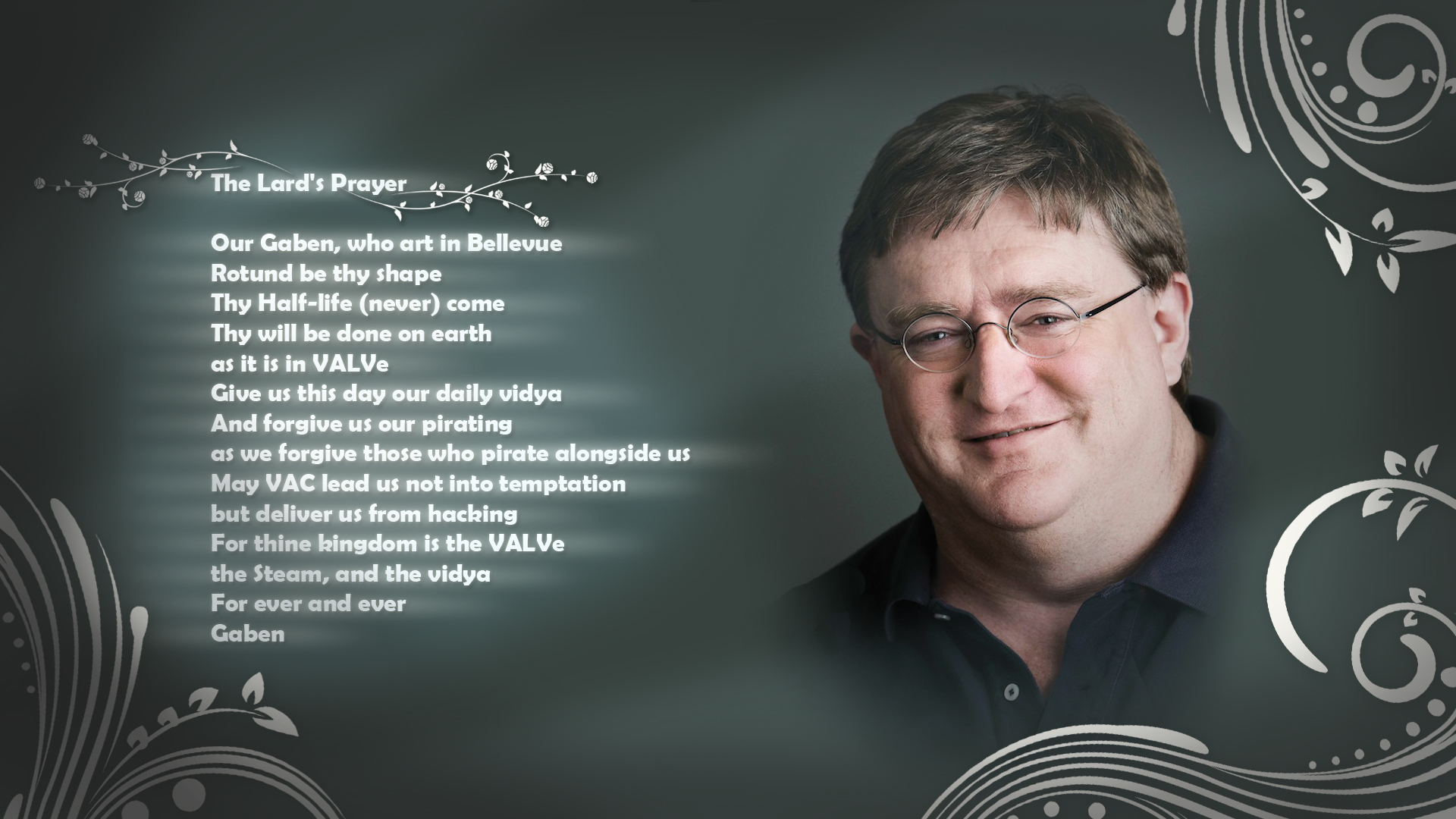 Let's see here...I started the year off immersed in Skyrim on my PC. I played it to about level 54 and walked away after beating damn near every significant quest by the end of January.

After Skyrim, I let Dark Souls torture me and my PS3 through the rest of the winter. I didn't even try NG+, but with the Prepare to Die edition now available on Steam, I may buy that if it ever drops below $10.

I then jumped quickly into Castlevania: Lords of Shadow on my PS3. I liked it, especially the new take on the story (which was getting a little stale after 20+ years), but I hated the excessive QTE. That's a gaming convention that does not need to continue.

I spent all of spring playing Fallout: New Vegas on the PC. I quite liked it, especially now that the modding community has made the game so much more than it was.

UPDATE INSERTED: How could I have forgotton about my also-late foray into S.T.A.L.K.E.R.? Once I had installed the big mod package, it was a beautiful and fun game. Too bad I could never get Call of Pripyat to not crash on start-up.

I then made my first real foray into online multiplayer with Team Fortress 2 on PC. I know, 6 years late to the party, but still fun. I played the crap out of that through the summer.

I tried to get into Divinity 2 on my PC, but I just can't seem to stay interested very long. It's on my must-finish list for 2013.

Then Mass Effect 3 went on sale in late September through Amazon download (take that Origin!). In particular, the multiplayer, in which I have played over 800 games and am now in the top 5% by any metric. I'm trying to ween myself off with a bucket list game, Clive Barker's Undying, which is great but the Firebases, they call to me. Even now...

Not even a week after the gut-wrenching tragedy in Connecticut, and the talking heads are already floating violent video games (to be abbreviated VVG henceforth)as a potential contributor. Though it is pure speculation at this point that the crazy bastard even played violent video games, I can't believe they're wasting any breathe on the topic when the issues of mental health care, parenting decisions, and firearm regulations are far more worthy of discussion. Addressing these issues thoroughly and intelligently will help prevent further massacres; banning the sale of Halo, Gears, or Crysis will not.

To my knowledge, there are no peer-reviewed scientific studies demonstrating a causal link between playing VVG and a propensity for real life violence. For example: Subject A wanted to harm others after playing Game X. After a cursory review of Google Scholar, there are studies showing desensitization to violence and an activity increase in the aggression areas of the brain as a result of playing VVG, but extending that to making people act more violently has not been done. So to speculate that these mass shooters must have been influenced by Grand Theft Auto (passe, but they've finally moved on from Doom and Mortal Kombat) is irresponsible fear mongering. Lastly, the media is being hypocritical about the excessive portrayal of violence in VVG when, by far, the most violence-saturated media I consume is the evening news. I mean, it's gotten to gore and grief voyeurism. That desensitizes and disturbs me more than any zombie shooter because I know which is real.

Part of this is being driven by the firearm community itself, probably in an attempt to redirect ire away from them. However, as a participant in both activities, I call foul. Don't sacrifice the 1st Amendment to prop up the 2nd.

Jubilation and bliss, there will be a Dark Souls 2! There aren't very many franchises I follow anymore, but the Souls series is one of them.

This is good, because as I get older (30 next month and already greying), I have less time to play. So my time is more precious, and the games I play need to be worth it.

They will have my money, they will have my time, this is known. I love the brutal difficulty, although my wife seems uncomfortable with my angry and profane behaviour while playing.

Just kidding! I am not touching that with a 20 foot pole.

I'd rather talk about...Dragonborn. I actually haven't played any Skyrim since February; no Hearthfire, no Dawnguard, nothing. Not that I haven't wanted to, but I played the original for over 150 hours and needed to get out before I got tired of it. But Dragonborn in particular looks appealing to me, so I may dive back in once it comes to PC. And I mean a vanilla restart, and maybe review some of the beautiful mod packages that the community has created over the last year.

My wife and I are going put up our first Christmas tree together next week. Odd that in 10 years, we've never done this, but this year we're not traveling back to my family ranch for the holidays since we already visited them on the west coast a few months ago. So we're thinking about getting a live tree and then giving it to a friend with land for planting. It's more expensive, but feels better than having a dead tree going to the chipper.

I'm bowling tonight in league (my first year, I still suck), and my cursed ankle is hurting. I don't know when I rolled it, but it's been bothering me for a few weeks now. I'm not quite 30 yet, why must my aging body vex me so? I've even been exercising regularly again, hoping to gain back the muscles I lost over the last year to marathon sessions of Team Fortress 2 and Mass Effect 3.

....and then some! The scrubs playing Mass Effect 3 multiplayer are trying my patience. I dropped down to Silver to try a new way of playing my lvl 20 Turian soldier using just the Phaeston X (scoped and stabilized) and no points towards prox mines. It's basically long-distance auto-sniper that can spam concussive shots. I started with two other players, an infiltrator and a sentinel, of decent ranking and level on Firebase Vancouver against the Geth. I figured it would be a good match, high probability of winning. What I did not know is that these two jokers were effectively useless. How they had gotten to their N7 rankings is beyond me. They didn't take cover, they charged into every fight, wasted missiles on early rounds...even on Bronze this would spell doom. So I pulled the team through wave 8 with a whole lot of reviving, wasting all my expendables to keep these two alive. I should have rage-quit, but I wanted to see it through. So on waves 9, 10, and 11, I just let them die where they fell and whittled down the enemies by myself. Thank goodness wave 10 was a "high value targets" wave and not an escort or defend wave.

Also, congrats to our newly re-elected president of Ohio. Now please, get all those damned ads off the airwaves!

So glad to see Gamespot hammer Resident Evil 6 with a sub-5.0 review. I haven't played it, but the word is that it is over-saturated with deplorable QTE, a plague on gaming and one that needs to end permanently. They're really just cinematic Simon Says games, and that's not why I played any of the previous RE installations. Hopefully this hurts sales enough that Capcom listens to the market, but they've shown themselves to be staggeringly tone deaf lately, as bad as EA or maybe worse.

And I'm glad I waited. For me, it was a very satisfying journey and conclusion. If I had played before the Extended Cut was released, however, I might have a different opinion. I still don't like EA's business practices, especially regarding DLC, but it is good to know that they responded to the gaming community's biggest gripe with a satisfying solution. My only real gripe now is, as a PC game, why they gotta punish modders?

Now I need to get back to the multiplayer so I can get that Perfect ending. Hopefully no lag issues tonight.

My computer build is now about a year old, and it has not disappointed. I worried that there would be some breakthrough in PC gaming hardware that would 1) make all my components way overpriced and 2) allow game devs to sprint past my abilities.

However, prices have mostly stayed the same (RAM down, HDD way up), and it still devours games at max settings, no hardware issues whatsoever, and the Win7Pro platform is more stable than I'd ever hoped. Good thing an old flame of mine (seriously, she was a flaming redhead) worked at microsoft and tipped me off that Pro is always better than Ultimate (more debugging and proofing for big business). It's made me question my console dedication. Since I built the PC, precious few console-only games have enticed me: Dragon's Dogma, Uncharted 3, and Dark Souls, the latter now being available on steroids through Steam. So that makes me wonder if I'll even both with the next gen of consoles, which would be weird since I've been an avid console gamer since the late 80s. We shall see!