Or, as I shall refer it to, N5SCC. Sounds damn cool :P 'Christmas' is somewhat of a stretch though, as my online forum party goes way beyond that, from now until February 2 the following year. Lots of planned events, some with prizes. You'll get a free prize for just entering!

Peep this topic for more information, and join Nintendo 5-Star forums to get in on the fun! 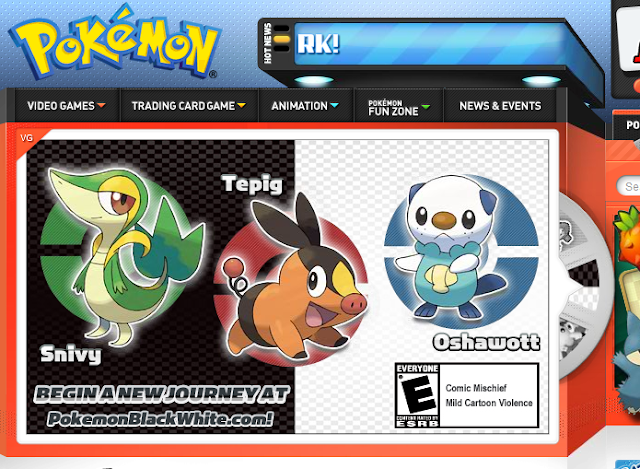 Tsutaaja, the grass snake, is named Snivy.
Pokabu, the fire pig, is Tepig.
Mijumaru, the sea otter, is Oshawott.

Then the two legendary mascot Pokemon, Reshiram and Zekrom, keep their names, as expected, and they are the Vast White Pokemon and the Deep Black Pokemon, with the abilities Turboblaze and Teravolt.

Tepig, Pokabu's new name, is also a combination of two words, 'tepid' and obviously 'pig'. Tepid meaning lukewarm, or low level of enthusiasm. The word is played well, but it certainly could have been better (being of a neutral/slightly negative connotation). No more sexual innuendo though.

Oshawott is tougher to crack. It could be a mixture of three different words, 'ocean', 'water' and 'otter'. I swear it's this close to matching the fan name of 'Wotter' (imagine how ridiculous that would sound if that were real). And just like 'Miju' is a corruption of 'mizu' (water in Japanese), 'Osha' could be a corrupted form of 'ocean'. The name also sounds oddly Canadian. Does the water starter come from Oshawa, Canada? Anyway, it's a brilliant name. I like it more the more I say it. Oshawott!

Unova, could mean UNited States OV America (silly, but makes sense. I'd lol if this was the real inspiration) or based off the Latin words meaning 'one new', or the Italian derivative of 'new' too. Wonder why they didn't keep the name Isshu though- this makes Gen 5 the first generation with a region name difference between the JP and US versions.

Overall, it's fine, it's not the end of the Pokemon world as we know it. The new names didn't make me puke. Sure, I was taken aback for the first ten seconds, but the names are comfortable and easy to get used too, even if Oshawott still sounds a little weird. Looking forward to know more!

Every year on this day (well, yesterday, actually. I'm a bit late coming here), people act all weird around me. My Facebook gets spammed with tons and tons of people saying the same thing to me. I get free stuff and free money from my family members and friends. Even my DS has a different startup sound not heard on any ther day of the year. Hmm....

I decided to pop by today and found out that I was redirected to this new place called asia.gamespot.com, instead of my usual haunt at the international site. Even when I tried to go there, Gamespot wouldn't let me! It's like I'm stuck here!

Oh well, guess I'd better get used to it. After all, it's not like I lose all my contacts and stuff because of this move. The only thing that's different are the 'top 10 most popular' lists on the bottom of each console page, which are half blank due to Asian Gamespot's newness :|

And...woah, there's an entire board exclusive to Asian gamers on Gamespot. SWEET! *goes*

If you know which Pokemon that is in my new icon, you win. :)

Aside from the movie giveaways, which I can't attend since I don't live in the US or Japan, I've never owned a legit Arceus that I could call my own (as in, not traded to me). Until now.

I don't know how many of you have seen these excellent pics before. If you haven't, you're in for a treat!

Some of the cutest pictures from a perfect gaming world. It would be a much better place if all gamers would behave like this, wouldn't it?

No, not the first clear after beating N and Team Plasma's leader, but the second clear, where I finally get to hand the Isshu Champion's ass back to him on a plate. My team is largely the same as the one I used to beat the main story.

And the rest of my trained Gen V Pokemon which didn't make it into E4.

Yup, I've trained a lot of new Pokemon. They're all so interesting I want them all! Even after National Dex I haven't toughed a single one of the old 493 Pokemon ever since I started the game. It's that good.

Professor Layton accuses girl of being a witch.

'That person is THERE!'

On the other side of the table...

'Professor, there is a big contradiction in your logic!'