2 weeks ago, I reveived a PM from my friend Kasiabartek. She asked me a partnership to write a editorial, about the power-ups in gaming world. I accepted the mission, and here's the editorial. Writing this, I realized how interesting this issue can be... well if I realized it, maybe you like too...

The Power-Ups That Made History in the Gaming World.

Doesn't matter if you're an avid player for a long time (which is in the gaming world since the 1980s), or began to explore the virtual territories recently. The reality is that in one way or another you've ran into something that increased the strength of your character for a moment.
I'm talking about the Power-Ups, present in most games, since actions-adventures until puzzles. They may appear as medallions or feathers, and are found in chests, released by the enemy or be unlocked through some action.
Today we'll recall some of the most iconic, including the notorious "invincibility", "attack power increases" and even the "hero change into infernal beasts". With the introduction to the subject, let's go! 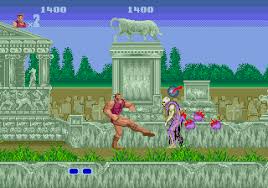 To start our special blog, nothing better than the mythological Altered Beast, produced by Sega during the 1990s. In the game you control a strong man who sought to save his beloved from the clutches of a dark lord, finding a bunch of zombies, snakes, wild beasts and flying-eyes down the road.

The Power-ups in a sphere form were released from the bodies of blue-pigs (with two heads) that came bouncing toward him. Each sphere increase a little his physical constitution, until the third sphere, when he turns into a real beast - among werewolves, dragons, bears, etc ...
But the most iconic is the narrator (Zeus) before the animation of the bestial transformation: he lets out a sonic scream, saying, "POWER UP!"

The next power-up is "Bubbles, The Chimp". Yeah, the Chimp in Michael Jackson`s Moonwalker game, also from Sega. That game is pretty much based on his movie, so the plot is following: Mister Big has kidnapped girls and making them slaves. It`s up to you to use you character`s powers. Release your little friends (scattered throughout each stage) from a neon force field then you will see the chimp on your character`s shoulder. He appears in each level. The chimp transforms Jackson into a robotic version of the singer. Attack enemies with more power. Shoot them with death blue laser bursts from your arms. There's nonstop fun in this game.

Mushrooms and others Nature Weapons

What? Calm down people, I'm referring to the great pop star of Nintendo: Mario. Stop and reflect for a minute there in the gaming world a protagonist who faced so many power-ups in your lifetime? If you have doubts about this, here's a brief relation of the magic items that he faces.
Let's start with the traditional red and white mushroom, which's there since Super Mario Bros. for NES. You grew in size, could crush distinguished enemies and even won resistance against an attack. In the New Super Mario Bros. the trip was even greater, since Mario can eat a giant variation of the item and go stomping and smashing everything in his path.

After minor changes, like the flower (which enables you to shoot fireballs) finally arrives the animals variations. Things started with the Tanuki clothes (a type of asian dog) that allows the plumber to float for a short period of time.
Then we had penguins and bees - present in Super Mario Galaxy for Wii. Although the paths of this journey were feathers for flight, green mushrooms that increase the number of lives, stars that make you invincible, and others. To defeat the evil Bowser everything is permitted!

Going to a more violent side in history (but without abandoning the kind of platform) we fall directly on the territories of Contra. For those who had no contact with the game, just imagine a Rambo-sty!e hero, which tries to penetrate enemy bases "in a bad@ss way". With a deluge of enemies and shots coming in your way, what could be the best thing to appear on the screen?
A power-up, duh! And Contra had many of them. The main and most desirable were those that expand the number of bullets fired by you (called Spreaders), followed by many others.

Mr. Saturn from EarthBound and Super Smash Bros. Brawl (as a power-up item and trophy). How do you call that thing? A creature? A little big man? Whatever you call him you must know that the origins of Mr. Saturn race is unknown. Maybe he came from outer space, who knows... A face with big nose, a single strand of black hair and whiskers - he`s crazy enough. His purpose is to scare children. Many people says that he is useless item in that game because he`s not into fighting (In Super Smash...) and he can be thrown at foes for minimal damage.

Shields and invincibility for the Hedgehog

Sonic is one of the series that most has changed over the years. The simple beginning took strangers directions when started in the three-dimensional world without getting even a fraction of the success that befell Mario and the Nintendo

side of things. But leaving aside the failure and returning to the roots, we see even in the first Sonic a lot of Power-Ups.
They were collected when the player broke monitors (inspired by ancient Macs), when jumping or rolling in then. The mainly ones are of invincibility, which acted almost as a type warning "run without stopping towards the end of the stage." The fun in see enemies bursting was guaranteed!
The protective shield and the boot speed had minor roles in the journey after. The arrival of the third episode in the Genesis Sonic which now has other skills (thanks to shields), such as floating through the air in a ball of fire or breathing underwater.

But not only of good items was made the Sonic life. Some of the boxes which contained a picture of Robotnik (Dr. Eggman), if blown up: or kill the player or made him lose all the rings.
The funniest thing is that Sonic was not the first to adopt the technique. Two examples that came before in market are Super Mario Bros. 2 and Alex Kidd. In case of Nintendo's hero, there's a dark mushroom that poison him. You'd think that would be good, but ended up with a less a life.

It's hard to find someone who hadn't the pleasure of play Gradius or R-Type. In these games the displacement of ships is horizontal, with a flood of aliens coming your way. With the opening shot (a "ball" at a time) you would have no chance of escaping with life, and your salvation lies in more power-ups, now made of small capsules that bounce in the scenarios.
In general, the shots are accompanied by three strength levels, which rise every capsule collected. The problem is that you must collect three of the same color to maintain strength, otherwise the whole effort will be down the drain. Imagine that you are developing the red shot and gets the blue by accident in the front of a boss ... It's time to say goodbye friend!

The party for the carnage

The formula of the multiplayer first-person shooter games is pretty standard, usually involving some medical kits scattered across the landscape, along with powerful tools that guarantee the advantage to those who know every bend of the stage. But the Unreal series went on, inserting the item "UDamage".
He made the user gun shine differently for a few seconds. For opponents it meant that it was clearly time to run because they would die with almost any shot. The issue is that the UDamage amplifies the damage, making you climb the rankings quickly.

Okay, after so much gain of strength and madness we take another leap into the past, to bring to you the best of all Power-Ups: The Giant Pills of Pac-Man, called Power-Pellets.
It reverses the situation completely; causing the ghosts (formerly untouchables, eager to grab you) began to run, since you had the ability to digest them briefly. They inserted strategy in the games, so that the players must plain the speed of the journey in search of the item help.

In Some Situations the improvement is Permanent...

While the construction of this editorial, I faced with a impasse. Be named Power-Ups only those related to the collection of items that affect just one character, even for a short and specified period of time?
Admittedly, this is the original purpose, but it is undeniable that the implementation of Power-Up is being expanded to other borders. The latest headlines treat the term as applies to any increase in strength of character and their weapons, even if such changes are permanent. Beginning with Castlevania: Symphony of the Night, we can draw a parallel with the syndrome of shoot games: the possible loss of the desired item by accident. This happens often with the auxiliary arm, which can be changed inadvertently when you touch another by accident (losing the ray gun to get the holy water isn't pleasant).
But if the theme is permanent power, nothing like the fog on his poisoned form. After grabbing the relic that allow this transformation, it's just sufficient to press a button and travel smoothly with spines, heads and skulls, without taking damage and without any concern. That's a good life eh Alucard?

One of the great symbols of Zelda series is the marker of life in the shape of hearts. To expand the power of Link was necessary to seek the big hearts, scattered in trunks, in holes in the ground or even lost inside the bodies of the bosses along the way defeated.

Boots and shots make up the menu of the day

n terms of items that are integrated with the inventory or the game's character throughout the narrative, none can overcome Mega Man franchise. Since the days of the NES the blue robot has earned a different weapon with each boss defeated, which served to attack the weaknesses of the remnants.
But it was with the X series that things got even more interesting. Mega Man now has the support of Dr. Light, which sparked a series of capsules through the stages. The highlights are the boots (which allow air slides and provide impetus for distant platforms) and for the improved armor, which cuts the damage received in half!

At the end of this section will be only the chaos! The reason is simple: we talk about Kratos and his blades! In God of War III the warrior finish his saga in a great sty!e, largely due to the presence of new weapons, which can receive a "Power-Up" with the sacrifice of the souls that you collect.
My favorite was the one obtained after the fight against Hades and there are many reasons for this. Firstly, it gives you total control over the souls, when you attack, three skulls protect you and swallow your enemies. If that's not enough, there are special attacks, which Kratos unleashes his wrath and make the tips and chains dance across the screen, while enemies fly to all corners. The result is phenomenal!

Phew, how many things eh? But despite the huge wall of text, I'm sure that you must have identified some of the Power-Ups showed in particular. Surely, lacked many examples (including InFamous, which was used as a call to the story).
But now it's up to you to list what are your favorite items to increase strength, and of course the most useless, bizarre and entertaining. Until next time and a great weekend to all readers!

and my thanks for Kasiabartek, that writed some parts of this editorial!