Right, so this is my blog. A blog where I (Jake) take a look at mediocre games and decide how they could have been awesome by making my own tweaks. This week's edition is Nail'd.

From what I read in the review, Nail'd is a game that seems like a too-easy arcade racer than the over-the-top game it should have been. But why? 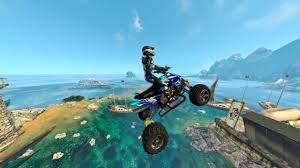 Well on the good side Nail'd has super super high speed racing. On the bad side, the races aren't challenging at all. Why is this? Well the physics (or lack thereof)are one reason. Whether you're driving an ATV or a dirtbike, the handling is more or less the same. This makes for a bland driving experience that is only worsened by the total lack of any physics whatsoever in the game. The developers talked about totally throwing away physics in the game's entirety. BIG MISTAKE. A game should NEVER throw away physics entirely. What a game should do is apply physics correctly. 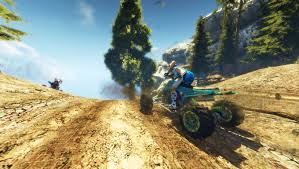 What I mean by this is that Nail'd needs a much more punishing crash system - but one that leaves in the high speeds, steep drops, and midair maneuvering. Nail'd should have been one of those games that tests your reflexes to the snapping point with hellish courses delivered at nitrous-drenched speeds. The kind of game that you have to pop crack before you play so that your fingers can twitch theanalog sticksfast enough for you to dodge obstacles and pull off sick stunts without turning into a giant fireball. What I envision for this game is a sort of Sonic the Hedgehog on vehicles if you will - with lots of explosions and ridiculousness thrown into the mix.

So in short, Nail'd nails the pretty visuals, awesome tracks, and overall sense of "whoa!" that would be required for such a game - but fails to deliver any difficulty whatsoever. In the end it's like a bowl of oatmeal with M&Ms in it. The good parts don't make up for the fact that it's just a bunch of tasteless mush.

Since this is for the most part a tirade, I'll keep it short. To a blunt point: WHAT THE **** DID BUNGIE DO WITH MASTER CHIEF!?To a finer point, where did our beloved (albeit faceless) Halo protagonist vanish to? Why has he disappeared (both from a story perspective and that of Bungie and Microsoft)? Will he ever return?

To answer the first of these questions, I take you back to the epic ending of Halo 3. Master Chief and Cortana (his computer program ally/sidekick of sorts) are floating through empty space, trapped in the rear half of the ship Forward Unto Dawn. Realizing that it may be many years before they are rescued, Cortana activates a distress beacon in case a search is mounted. Master Chief's final words are:"Wake me if you need me." Before he activates the pod and goes into cryo-sleep. [SPOILER ALERT]If you beat the game on the "Legendary" difficulty mode, you are rewarded with an extra scene that shows the rear half of Forward Unto Dawn approaching a mysterious, unnamed planet. Then it shows a memorial service being given for the heroes.Then the game ends. For most playing the game for the first time, a sense of incredulous outrage follows. What? What's that supposed to mean? Did they just die? Is this the end of Master Chief? And why, oh why, would Bungie choose to end the game in such a strange way. Is it supposed to be a farewell to the Halo franchise? Who knows. Until Halo 3: ODST is released, and we are faced with a prequel. A prequel for Schwarzenegger's sake! Again, the feeling of hopelessness towards ever playing as the Chief again deepens as you realize that another Halo game has come and gone without seeing a glimpse of our hero or learning of his fate. Now Halo: Reach is on the way, and although I'm very, very excited about it, I can't help but feel that no other character in the Halo universe will top the feats of Master Chief. I mean, what other character has THREE games of screentime under their belt? Not one. But why would Bungie do such a thing to our helmeted hero? Perhaps it's supposed to be a nostalgic farewell to the Chief. A sort of "he may not appear in a Halo game ever again, but he's still out there" mentality maybe? Or maybe Bungie decided to remove him from the picture for marketing reasons? Maybe they thought that he was just an overworn character that the general public was getting sick of playing as. Ridiculous, in my opinion. So what then,does the future hold for Master Chief? Mabye he's really not gone, and another game is in the works at Bungie that will showcase his glorious return (this is my favorite possibility). Maybe he will appear in future Halo games without being a playable character, or maybe in that phantom-like Halo movie that appears and disappears like Steve Jobs at a press conference. Maybe he will appear elsewhere, in some form not yet foretold. Or maybe he has indeed played out his final act in the world of Halo. A sad thought, I know. My opinion though, is that Bungie will not leave the Halo saga at such an unsatisfying end. I for one think that Master Chief is already making his return. The next best thing to his return, though, would be a game devoted to the Arbiter. Now that would be kick @$$!

-Please share your thoughts and feelings on this subject.

What with E3 having ended recently, I was thinking about all the new sequels and such to games that are coming out in 2010/11. Then I realized that an important one is missing from the picture! Warhawk 2! I know that the original Warhawk got old after a while, but it was a heck of a good time while it lasted. Why doesn't someone pick Warhawk up and give ita reboot? In my opinion, a beefed up Warhawk 2 could become a competitor to the Unreal Tournament Series (though it would have to be REALLY beefy). Here's a list of the things that I think Warhawk 2 could use. Firstly, customization options! More personalization for both the characters and the vehicles would really strengthen the online component. This could include more gear and kit options for the characters, customizable paint jobs for the Warhawks AND other vehicles, and a map editor. Imagine how awesome it would be to create your own maps for Warhawk 2 and then be able to play a 32 player match in your own arena! Secondly, a better experience point system. The one in the original warhawk was ok, but to achieve true greatness, I would recommend that Warhawk 2 have an exp system as well-developed as that of Borderlands. Of course some changes would have to be made to adapt it to a shooter, but you get the picture. Thirdly, Warhawk 2 needs more variety! In every aspect of the game, more weapons, more vehicles, more maps, more gameplay modes (a campaign mode would be interesting by the way), etc. More variety would really help Warhawk out in terms of replayability and lasting value. Finally, Warhawk needs to get real. Not in as an instult, but there needs to bea better vehicle piloting engine and more firepower, not to mention better character animations. The original Warhawk felt like an animated kids' show sometimes. Thanks for reading this blog fellow Warhawk fans. Here's hoping another Warhawk is somewhere in the works!