What can I say? I'm in a bad mood today and I'm determined to spread it around :twisted: And what better way to do that than with a list in which someone is sure to disagree on at least 1 entry on said list? After all, positive lists just aren't as much fun to make when you're already in a bad mood. 4 is the first number that came to mind, so I'm doing 4. This is a temporary therapy for me, so don't get too angry, it's just my personal opinion, there's nothing more fun than complaining about things you hate when you're already upset. Oh yes am I a negative person! I revel in it! I'm like the teacher in Sayonara Zetsubou Sensei!

Seriously, please don't get overly annoyed with this. 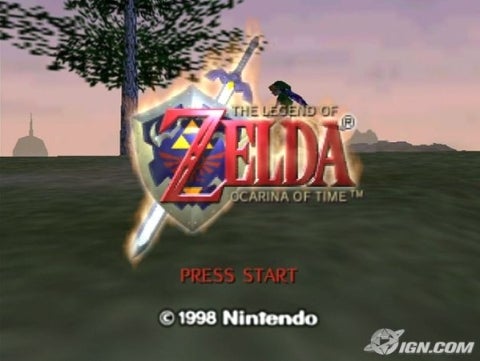 #4: The Legend of Zelda: The Ocarina of Time

Oh yes do I mean it too.

what ruined it for me:clearly it could only be that I played both Zelda: Twilight Princess (GCN version) and Zelda: Windwaker before it. I loved both of those games and Ocarina hardly compared.

do i still think people should play it?in short yes, it's a good game that aged better than most, but it's nowhere near as good as the recent endeavors. Don't expect as much from it and i'll still call it worth a play. I think it's still good, I just think it's highly overrated.

what ruined it for me:I dunno, probably playing the first one? The pre-game hype that I was totally a part of? How incredibly easy the game was?

chief complaints:incredibly easy gameplay, Atlantic, arbitrary hours of gameplay shoved in, the story making just about no sense whatsoever, gummi ship, needing to have played the GBA game to get most of the story (I didn't like that game either), 4 hour tutorial

do I still think people should play it?I dunno, maybe. There were a couple of truly shining moments in the game that occurred during the Steamboat Willie and Tron worlds that at $20, almost makes it worth playing. Soundtrack and pre-rendered CGI scenes are good. It's not something that I'd imagine ever playing again though, but a once-through might be ok.

what ruined it for me:I was expecting it to cure cancer, played FF 1&2 Dawn of Souls first, played Dragon Quest 8 first, played FF9 afterwards and preferred it immensely

chief complaints: story and characters (not all, just most of the playables), logic flaws (uh, we have a soft y'know), the One-Winged Angel song, that one random glitch I got in which the game refused to allow me to climb ladders (although exiting, saving, turning off, restarting seemed to work), gameplay difficulty

do I still think people should play it?no quite frankly, but a slight yes if only to understand what everyone's talking about and to understand why Square is still milking it.

what ruined it for me:Having played most all of the Zelda games (except Majora's Mask and some of the older ones) before this, having played tons of platformers on PS2 before this

chief complaints:other than everything? well sound, writing, gameplay, Issun, copious amounts of backtracking, brush recognition and controls, controls in general, camera, trying to use pretty graphics to cover up above flaws. The fact that this got ported to the Wii to try and get people to recognize it again (although the IGN watermark is hilarious), it has a 93 on Metacritic (90 for Wii version).

do I still think people should play this?No, not at all, not even to get why everyone else adores it. It can stay in the bargain bin for all eternity for all I care and join ET in the landfill.