Boy i havent made a blog in ages!

its the midnight so thought i would write a blog regarding why i think xbox360 is probably the worst console i have ever got to own.

First let me start by saying that i been owning the xbox360 for a year and half now and i have played few games on it such as Last Remnant ( amazing game which i have just recently finished ), Infinit Undiscovery and have played other games such as Tales of vesperia, gears of war 2, yu gi oh, bastion, etc ..i tried my best to love the system but everything about the system just pisses me off and here is why ( because im lazy i'll write everything in points form :P ) :

I guess thats it with the ranting :P.. i love Microsoft when it comes to their PC's and windows but gaming wise they are probably the worst! ( imo )

Thank you for reading this blog, i just been really annoyed with my xbox lately :P

Got a Vita on release date and i love it pretty much one of the best if not THe best handhelds to ever come out, here is a screenshot of everything the vita can do taken directly from my Vita:

Hello everyone how you all doing?

yesterday was the epic day of the release of one of the best handhelds to ever come out the playstation vita! i did an unboxing video yesterday showing what also it includes and few tips for anyone interested :)

Anyone else picked up the system?

Been playing FFXIII-2 non-stop since the day it came out :P.. awesome game by the way i suggest everyone to try it out, anyways yesterday i unlocked the platinum trophy :D.. beatiful platinum took me 80 hours lol

For those interested to see the first 15 minutes of FFXIII-2 i have recorded using the Roxio game capture from my PS3, i know many arent sure if they should get the game but i can tell you the game is worth it! i have put 14 hours into it so far and am loving it.

I been very interested in doing this for a while now tho where i record the first 10 to 15 minutes of the games and upload to youtube, hope it becomes succssful.

EBGames and Gamestop are doing some great deals for anyone that is interested in getting the new PlayStation Vita system, the retailer is doing a trade 4 games, any games that are worth $8 or higher and bumb up the the value for all 4 gams to $100 towards a vita lower it down from $250 ( if you would like the WIFI version ) to $150, another deal they have is if you trade an old system/console/handheld towards the Vita it will earn you $70 which could mean if you do all the above you can have $170 towards the vita which would require you to pay $80.. best deal ever?

Have finally beat the game on perfect ending and for anyone that dont mind spoilers here is the perfect ending video which i have just recorder off my PS3 and uploaded, very great and much better than the sad ending i must say, the bad/sad ending was very depressing

Ar Tonelico Qoga one of the best JRPGs to come out this gen, filled with great soundtrack, i suggest RPG fans to give this a try, on the PS3

Going to be uploading more videos of my games and try not to be too lazy :P

I just like that quote from Uncharted 3. well if anyone is confused this will show you what i mean :P

Here with this blog i thought i would post the steps i use to call a Nuke streak on MW2 which require you to get 25Kills withouts dieing, a friend of mine wanted me to post how i do it and to be honest its not that hard, just use your perks wisely and you should do it in no time, if you follow what im going to say now you should be able to call your very first nuke or even double nukes, so lets start:

Doing and following those should help :P

For this blog i thought i would talk about my most favorite First Person Shooter and the legend that is Call of Duty series 8). Let me tell you all how much i used to hate FPS games before the PS3 comes out, i used to only play RPGs during the PS1 and PS2 days and only RPGs plus adventure games, when PS3 first came out they also released Call of Duty 4, still wasnt even planning to pick the game up seeing how i did not like FPS games, waited almost 2 years after CoD4's release till i finally bought it ( my friends kept telling me to get it every single day since it released ), i got to say i was blown away! Call of Duty 4 was so good i ended up playing nothing but CoD4 for months till i became a huge fan of series, the games in my opinion destory every other FPS out there, heck if it wasnt for CoD i wouldnt even think about buying games like resistance, killzone or battlefield and so on :P. still i have yet to see any other game that is as addictive as coD sadly.

Anyways lets talk about MW2, Mw2 is bascially my favorite Call of Duty title ever! that game is so good i honestly still till this day play it :P, what makes it so addictive are the big killstreaks it got, for those not sure about the game when you play online for each kill you get without dieing the game earns you rewards called killstreaks, they range from 3 kills to 25 kills ( nuke ), i have officially called over 250 nukes online to date! :P.. yes i kind of counted :lol:.. if anyone still playing Mw2 here on gamespot and for the PS3 add me and lets play together :D. i have recently checked how many time i spent on Mw2 and i actually spent over 35days playing online :P thats not counting the months i spent on spec ops with my friend and playing story mode twice :lol:.. yes im so addicted :lol:

and you guessed it im very much looking forward for the king of FPS and its return with MW3 :D 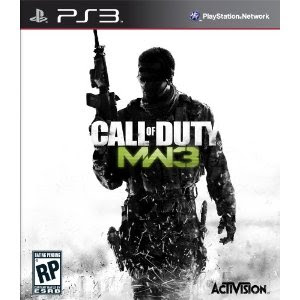 Despite me loving CoD i still play other games too and many know me here as the JRPG lover, i love JRPGs and play them all the time but to be honest its quite less than how i used to play them before, i now see myself playing more Western games than japanese :P. the recent japanese game i just beaten is Catherine, so good of a game.

till next time everyone. what do you all think of Call of Duty?