Well the announcement has been made. As of today (October 7th) Gamespot will start to transition into it's new system and the old site will be no more. It also means that posting (blogs, forums, comments) will no longer be possible until it takes effect. I can't say I'm ready or excited about this but it really doesn't matter at this point but I guess I'll put on a brave face and tackle this full on. Hopefully Lark will listen to some of the users and get some things changed for the better.

With the release of Pokemon X & Y for the Nintendo 3DS on the horizon, it's easy to forget how some of us got introduced to this great series. 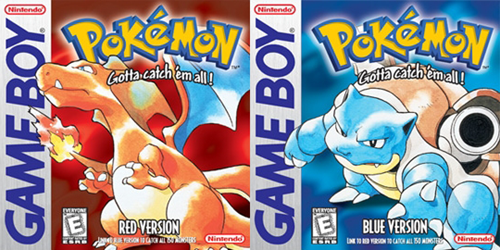 On this date (September 30th) back in 1998 Pokemon Red & Blue were released in North America. These two games essentially started a revolution that would later become a multi-million dollar franchise with a long and storied history filled with many hours of joy and a couple with frustration.

So what are some of your memories of Red & Blue or perhaps of another version that got you hooked?

Wow, would you believe that it's been 9 years today since I joined Gamespot. I still remember when this place was Videogames.com. You can still see the old "V" logo in the older game screenshots. A lot has happened since I last made a proper blog post. Where should I start?

I guess I'll start with the best thing to happen in my life, I married my college sweetheart/soulmate. We met a about 7 years ago (this will sound a little cliche) while at spring break in mexico. Long story short:

Speaking of which, I got my masters degree in Information Technology. Six-figure salary here I come. :D
It was really hard work and a huge pain in the ass but in the end it'll all be worth it.

One of my goals in my time in Gamespot was to become a Mod. So on August 9, it happened! I still don't have the badge emblem but I do have my modling emblem, which is weird since they are both often given together. Perhaps it's a trial period or it is because I was a Ranger before that.

Well, I guess those are the major points since my last update blog. Until next year people!

It has been about a year and a half since I made my last blog, I really didn't have much to talk about since. I decided to make this since I startedcommenting in ppls blog and getting"wow, i haven't heard from you in a long time" and "i thought you got banned".

Not much has changed since then except that I finallydecided to put upa banner, leveled up some, and got some shinyemblems since then. Feel free to take a quick peek.

Personal life is still the same.Still in college gettin'mesome of thatfancy edumacation (misspelled on purpose). I'm trying to getmy master's degree in computer programming and so far it's within grasp. Just 2 more years and it's mine!

Few weeks ago I decided to take a big risk, I bought a 360 elite (counting down the days until I get the RRoD). No xbl yet but maybe when they release the next sbox I might break down and suscribe to it. Got some good games for it, Assassin's Creed 1, Mass Effect 1, GTA 4, Bioshock, and the two games that came with it (Lego Batman and Pure). Still haven't touched GTA and Bioshock (still wrapped in the plastic).

Well, I guess that's does it. Next blog coming 2 years from now!

Finally, after weeks of calling countless times to many stores over the past few months, I have tracked down and bought earlier this morning a wii! While keeping my joy and delight to myself as I walked into Target, walked straight to the electronic department, and asking the salesperson for the wii all the while singing the happy happy joy joy song in my head. I also decided to pick up Smash Bros, Star Wars: Republic Commando (PC), and Star Wars: Battlefront 2 (PC) while I was there. Unfortunately I am at school right now and my last class doesn't end until 4:45pm! :x No doubt today is gonna go awfully slow but the wait will be well worth it! Just 5 hours and 47 minutes to go.

Well, that's all. I gotta go, the teacher is looking in my direction probably wondering why I'm typing during one of her boring as hell lectures.

Gamespot has nothing on IGN when it comes to elaborate April Fool's Day joke go.

You've gotta admit, that was really well done. Too bad it ain't true. :(

I'm gone for a few days and I come back to find out that alot of people are making some sort of "5 things about me" blogs and it leaves me wondering......What the hell is going on here? Can someone fill me in?

Yesterday (might've been the day before) two local news crews were doing a story about a death not to long ago as a result of a drag race on interstate 10. After they were done filming they decided to have a little friendly race and this is the end result:

It even make it on CNN on the show Anderson Cooper 360 in a segment called "What were they thinking?"

Only in El Paso.