Thanks for all the nice feedback on my previous post! Like I said, here is the 2nd part of my Blog series on Battlefield 3. This time no images in the post itself, because then it would become a bit to long with all the 55 weapons included in BF3. So, I made links instead, so click on the weapon and you'll get an image! So the second most important thing in a Battlefield multiplayer, is the weapons. Battlefield 3 contains 55 weapons, which is more than Dice has ever done before. There are a few important things, or changes, when it comes to the weapons in the game: Supressive fire. Lay down supressive fire to limit the combat capabilities of enemies, making their vision blurred. Quick reloads. Speaks for itself. Multiple fire modes. Most guns have multiple fire modes, single, sustained and burst. Fully customizable weapons. You can fully customize your weapon with various optics, ergonomics, performance upgrades and underslung weaponry. The underslung weaponry is again fully customizable. Bipods. Deploy your machine gun bipods on any mountable surface for greater accuracy. Okay, enough talking again, here are all the 55 weapons included in the game: Assault Rifles M16A4 AK74M M416 AN94 KH-2002 AEK971 F2000 G3 ASVAL Carbines M4A1 AKS74U SCAR H G36C A-91 SG553LB Machineguns M249 RPK-74M M27 IAR Pecheneg M60 M240 Type88 Sniper Rifles Mk11 SVD SV98 M98B M40A5 M82A3 Battle Rifles M39 SKS Submachineguns P90 MP7 UMP-45 P90TR PP2000 Shotguns 870MCS M1014 USAS-12 DAO-12 Saiga 20k Rocket and Grenade Launchers SMAW RPG-7 Javelin FIM-92 stinger SA-18 IGLA M136 AT4 Pistols M9 MP443 G17 M1911 MP412 G18 M93R That's it for today! My next, and last post will be tomorrow. Then I'll try to cover all the weapon accessories and gadgets. If you still have any questions please ask them! I'll try and answer them in my next post too.
So, it's been a while since my last blog post. And I thought, if I want to do a really useful blogpost, about something I know a lot, why don't I write one about Battlefield 3? I will give you as much information as possible, I'll name all the weapons included in the game, all the vehicles, and anything else notable. Let's start with the signature of the Battlefield series, the vehicles. First of all, there has been a lot of hate on the regenerative armor on vehicles. The regenerating is very slow, and you really need to get out of the war zone to get it in full effect. So if you're in the middle of a fire fight, you'll still need an engineer to be repairing your vehicle. Also, the armor doesn't regenerate under like, 75 percent damage. Then there's the disabled state of the vehicle, when your under extreme fire, and don't have an engineer around that can repair your vehicle, your amount of damage will probably go past a state where your vehicle becomes disabled. When a vehicle becomes disabled, you can't drive it anymore. The only way, let's say, the last resort of saving your silly ass, is using it as a stationary gun. It's very useful, and not only for yourself, because if it's disabled, you need an engineer of course to repair your vehicle. So, while the engineer is repairing your vehicle, it's a good a idea to defend it with a gun, you don't want him get killed ;) Okay, enough talk about the vehicles, let's list the vehicles that are in the game. Fast Transport: Growler ITV 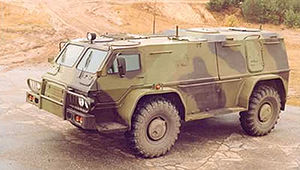 Well, that's all the vehicles in the game. They sure put a lot of work into the key thing of the franchise. Dice saying Battlefield 3 is their biggest Battlefield game ever made is certainly no joke. I will cover all weapons, and their custumizations in my next entry. Stay tuned!
Yeah, first time in a year I'm actually writing a blog again... I guess, now I have this much followers, I should do some more reviews and blogs with a lot of words like this in it. I think my reviews will be a series of good and bad points, maybe some personal experience with the game... I'm just too lazy to write an actual, good review :D... but most people are here on gamespot... so why should I bother... I won't be reviewing all the latest games coming out, simply because I really don't buy a lot of new games, I just stick with the games I like a lot. But, I do have a friend who buys a lot of **** so maybe when he has a new game I'll review it for ya... I don't know... I suck at this :P lol
Medal of Honor