I am still chuggin' along.

Kind of slowed up from Day Two, but still moving up in the world.

Peace Out
YAY!!!  I am moving up in the world.
I have finally reached Level 20.  I can't wait for this level to get past, because it will take forever for me to do it.  Today, my percent is 0.8%.  That's really low.  Maybe tomorrow I can be at 2.5% or something.  But from what I hear about Level 20, that's highly unlikely.  Oh well.  Here's to spending the next month and half on Level 20.

B is for Big Boi.

So, I have been thinking that I want to buy a new CD.  I have been racking my brain to decide on which one I want, and I came up with an answer.  The next CD I would like to buy is Idlewild, OutKast's newest CD.  Do any of you guys have this CD?  And, if you do, do you like it?  I have heard about four songs from it, and I liked them all.  Please tell me if I should get this CD, or if I should some other one.

A is for artwork.

I have recently taken up an art project.  It is nothing big, and I am not getting paid for it.  What is it you ask?  I am gonna paint my room for the first time ever.  That's right.  I am 17 years old, and the only color my room has ever been is white.  I decided it was time for a change.  Plus, I was at Ben Franklin yesterday, and they were having a sale on spray paint.  I decided that I should do something fun for my senior year.

I am not gonna just paint it a single color, I am going to put different pictures on my walls.  I will be moving my bed into a room with it's own heater for the summer, and that will free up some space.  I am gonna have and old school Nintendo controller on one wall, and then I am gonna paint a brick wall on another.  The brick wall is gonna be used like an actual wall outdoors.  You know, one I can graffiti up all I want, and just try out new desgins.

That just leaves one more wall to paint.  I am open for suggestions.  I really want to start this project as soon as possible, I just need to buy some more spray paint, and decide on the actual color I want to paint my walls.

See you guys tomorrow with another letter for your insight into my life.

This week's rapper is: 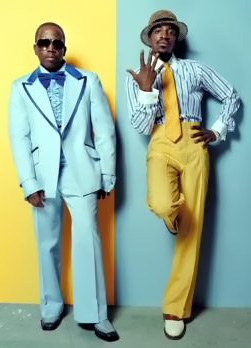 OutKast consisrs of two rappers from the ATL. (Again, that's Atlanta for all you white folk) Those two rappers are Big Boi and Andre 3000. The have one movie together, and 6 CDs. Their one movie is "Idlewild". Their CDs are: "Southernplayalisticadillacmuzik", "ATLiens", "Aquemini", "Stankonia", "Speakerboxxx/The Love Below", "Idlewild".

OutKast's blend of gritty Southern soul, fluid raps, and the rolling G-funk of their Organized Noize production crew epitomized the Atlanta wing of hip-hop's rising force, the Dirty South, during the late '90s. Along with Goodie Mob, OutKast took Southern hip-hop in bold, innovative new directions: less reliance on aggression, more positivity and melody, thicker arrangements, and intricate lyrics. After Dre and Big Boi hit number one on the rap charts with their first single, "Player's Ball," the duo embarked on a run of platinum albums spiked with several hit singles, enjoying numerous critical accolades in addition to their commercial success.*

To hear some of OutKast's music, you can buy one of their CDs, watch the movie Idlewild, or take a look at my next blog.

Alright people, I need some help.  I really want to add some new sigs to my already existing one, but I don't have photoshop.  The last person that made my two that are combined is in school now, and doesn't have time to do this for me.  What I need from you people is a Superman sig, and a Derek Jeter sig.  On both sigs, I would like it to say my name.  On the Superman one, I would like it to just have a picture of the Superman logo.  On the Jeter one, I would like maybe two pictures of D.J.  I would like it to kind of look like the Kevin Garnett one below.  If you do create these for me, will you combine it/them with my current sig.  I really want some more pictures for my sig, and those are the ones I really want.  If someone could do this for me, I would be very grateful.

Here is my current sig, and it is what I would like to you  to combine it with the new ones.

[video=d3cxkmT55bsLuDTX]
This video goes along with Rapper of the Week #7.

This week's rapper is:

Common is a rapper from Chicago.  He has four albums.  His four albums are: "One Day It'll All Make Sense", "Like Water For Chocolate", "Electric Circus", and "Be".

Common (originally Common Sense) was a highly influential figure in rap's underground during the '90s, keeping the sophisticated lyrical technique and flowing syncopations of jazz-rap alive in an era when commercial gangsta rap was threatening to obliterate everything in its path. His literate, intelligent, nimbly performed rhymes and political consciousness certainly didn't fit the fashions of the moment, but he was able to win a devoted cult audience. By the late '90s, a substantial underground movement had set about reviving the bohemian sensibility of alternative rap, and Common finally started to receive wider recognition as a creative force. Not only were his albums praised by critics, but he was able to sign with a major label that guaranteed him more exposure than ever before.*

To hear some of Common's music, you can buy one of his CDs, or you can look at my next blog in a little while.