I finally got the call from California Baptist University today, and I was accepted. I'm really excited because it's such a beautiful school. It's a great private college that provides a 16:1 student to teacher ratio--and that will definitely help me, since I'm taking Pre-Medicine, and probably majoring in Health Science. *Here's hoping for Harvard Medical School one day*

Check out this awesome trailer for season 4.

Thanks for reading my blog, guys. :D

This summer, I will take on one of my dreams. I am an avid filmmaker. I've made several short films for fun/school, and I'm going to be making a full length film this summer. I will be using all sorts of equipment and a really good camera to shoot my dream movie. I hope it turns out well, so I can submit it to one of those film festivals.

As of now, I'm going to be doing Pre-Medicine next year for college. I, unfortunately, have no plans for attending film school/production school. I think, I need to be somewhat realistic when it comes to my career. If I go to film school, it would take around 3-4 years. If I take Pre-Medicine, I can go to medical school in 4 years. I think a guaranteed career is better than taking a major risk. The Film industry doesn't really guarantee a spot for you--for all I know, I could waste 4 years in film production, and never find a job.

This is why I think being in a film festival would give me a good chance of getting noticed in the industry. I don't expect to win on my first movie; but practice makes perfect, and I will do my best to shoot a great film this summer.

For all of you film-buffs, I will be shooting this movie using green-screen; and I still haven't decided what camera I'm going to get, but it's going to be really good. So far the genre(s) is: Thriller/Mystery/Drama/Sci-Fi. I would say it shares some similarities to LOST and The Watchmen. I'm still trying to come up with the perfect story, and I will be penning the script later this year. It's very difficult to shoot an amateur film for one reason: You have to do everything. I have to come up with the story, write the script, cast actors, make music, do cinematography, film, edit, do special effects, etc. I'm not bothered by this, but I know I have alot of work on my hands. I'm going to look for some actors (i.e friends) after I figure out the major parts of the story.

Well, wish me luck. I will be making an update blog here every day. Once I finish the movie, I'll post it up--in the meantime, I will post my other movies sometime this week.

Here are the games I want to buy/ am interested in...I probably (most definitely) won't buy all these games unless I win the lottery.

Wow. I'm not sure if some of you have heard the news, but Warner Bros. is going to exclusively back Blu Ray as their main format.

This is a crushing blow to HD-DVD. I officially jumped onto the Blu Ray bandwagon when I bought my copy of Lost Season 3 several weeks ago---the difference is night and day when compared to a standard DVD; I really can't go back.

While Blu Ray may not substantially benefit gaming, it's an excellent format that has potential.Anyways, I think the format war is over, the damage has been done.

I'm currently driving a 2001 Ford Expedition, and it's time for an upgrade! 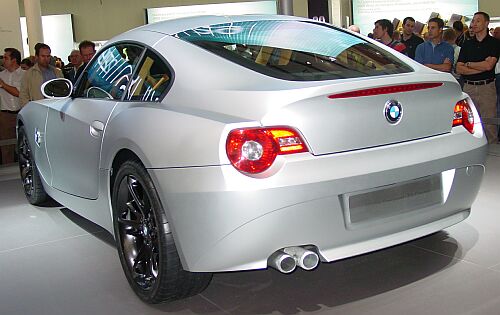 It came out so early in the year. I loved the atmosphere, the characters, the story, the dialogue, and the gameplay. The game was over-looked by many. Admist the many great games that came out this year, I enjoyed this game the most.

My Game of the Year:

Such an Awesome game.

*Goes back to play the Witcher*

After beating Bioshock on hard earlier this week, I wanted to play it again in order to get the other ending. As most of you know, Bioshock has three different endings. I recieved the "good ending", and will now try getting the "bad ending".

I will be playing it on easy this time around. Bioshock is one of those games that really entertain you if you screw around--I figure playing on easy will really benefit that goal.

Just some thoughts after beating the game:

I really enjoyed the game. It has such a subtle way of telling you the story. Picking up audio tapes of various people in the levels is such an excellent way of telling the story---it's far from original, but it's definitely captivating. I actually prefer this method of story-telling over cutscenes simply because: the more you explore, the more you know. There are so many audio tapes in Bioshock--it's really impressive. I actually missed a few audio tapes, so I'll keep a close eye for them when I re-play the game.

Another aspect I enjoyed, was the outstanding realism in the game. When I played the game, I never had a "suspension- of belief" attitude. I really felt as if the events in Bioshock can really happen. It's not like Star Trek or Final Fantasy, where you have to have a suspension of belief, and pretend like everything is real. Games like Bioshock really make you think.

And that's where I'll end for now. Look forward to a video review by yours truly. :)

The Xbox 360 Core SKU was introduced at the launch of the Xbox 360. It was introduced at a relatively low price for a high definition next generation console at $299.99 USD. There was a catch, though: it didn't include a hard-drive and was void from essential features that enhance the Xbox experience.

So what's the mistake? Microsoft says the sweet spot in pricing is $199. This means that Microsoft isn't going to get rid of their Core SKU anytime soon. In fact, the Premium SKU has a better chance of being axed than the Core model. Why isn't Microsoft going to get rid of this SKU? Because they need to expand their demographic. The console is only appealing to hardcore gamers, and they need to expand like Nintendo is expanding with the Nintendo Wii and Nintendo DS.

Developers will continue to keep the Core model in mind, and without a hard drive, games are going to get downgraded. Microsoft even wants developers to, and I quote, "degrade" the game. Microsoft is asking developers to "degrade" textures in games in order to cater to the Core users and increase loading times. The only exception to this policy are MMOs. Now, you might counter this by saying that the mass market does not own a Core SKU--well that brings me back to my second point: Microsoft WILL bring down the Core's price to $199--and that is mass market pricing.

Thanks to the Xbox 360 being the best selling HD console, most games will have to be built around the Xbox 360. GTAIV will NOT have a HDD required sticker on it. You know why? Because GTAIV is a mass market game, the Core is a mass market system: if the two aren't compatible with eachother, then Microsoft has an even bigger problem on its hands.

To add to this, if some of you think that the majority of the mass market cares for things like the HDD: then you're wrong. Only 30% of 360 owners are aware of high definition capabilities in their console. I seriously doubt users care about HDDs if they aren't even aware of the major selling point of the Xbox 360.

The PS3, however, has a HDD in every single unit sold. This is a major incentive to developers and gamers alike since developers can use the PS3 as the lead SKU. Many developers have already done this with EA (Burnout Paradise and Army of Two) and Sega (Sega Rally) starting the new trend. I built it earlier this month. :D