So I've been mega-addicted to Scott Pilgrim vs. The World lately. I've read the books and beat the game multiple times, still going for all the trophies though. All that's left is to never get hit by an enemy in a stage, call all summons, and a multiplayer one.

I'm currently looking for some sprites for the Scott Pilgrim game. I was able to find almost everything I need excpet for Matthew Patel (the first boss) and Mr. Chau (secret summon)

Also any sprites of the general enemies or background NPCswould be helpful too.

If anybody knows where I can find these, it would be much appreciated.

Okay so I'm not sure if you all have heard about the rumors of a Dissidia 2 floating around, but Square Enix has confirmed it! There will be a new Dissidia coming out! It's calledDissidia 012 [duodecim] Final Fantasy​ and will be realeased in 2011 for the PSP!It already has 2 confirmed characters, Kain (FF4) and Lightning (FF13)

SOOOO since there will be rumors about the cast floating around for awhile, I figured I'd post my dream roster for this game! None of this is real (of course I wish it would be) I'm just doing it for fun.

Yep. Just let that soak in.

Yep, started over on Final Fantasy VII again. Again. But this time, it's on the PSP! DIFFERENT! Well... not really. I dunno. I just like being somewhere and having the ability to say "Well I'm just gonna play Final Fantasy VII now..." and watch them go "Uhhhhhh-WHHHHHAAAAAAATTTTT????" or something like that. I should be done in no time since this is at least my 10th playthrough of the game.

I am still in the midst of Crisis Core though. However, I DID beat Chaos in Dissidia and unlocked Shantotto. Not much left to do there but unlock Gabranth and do Inward Chaos. As for Broken Destiny, eh, there isn't much to do in that game to start with. I cleared the gauntlet anyway.

Also, I only need 3 more achievements in Soul Calibur IV, so my goal is to get them. I just need to do 200 impacts, Level up to 30 in Multiplayer, and get some ridiculously high score in Arcade mode. Should be fun.

Okay, so, yeah, for those of you who have not yet heard, Tetsuya Nomura, lead designer for many Final Fantasy characters and stories including those of Versus, has completed all of the character designs from Versus XIII and finished writing the plot! What does that mean? Well, it means we will FINALLY start seeing more of this epic-tastic game which thus far has only two real trailers and one brief cutscene to speak of thus far.

Also, those of you up on Japanese gaming, now that E3 is done, what's the next festival to be happening? It's The Tokyo Game Show of course! So, In September expect to see Versus there! I am completely stoked, I want this game so bad. I'm praying for a dual-platform release, but if need be, I'm going out and buying a PS3. I barely know anything about Noctis, but I have a feeling thathe's going to be my new favorite hero among the previousFinal Fantasy leads.

Recent rumors were that Agito was going to be the next release of the Fabula Nova Crystallis: Final Fantasy XIII series. But now I'm wondering if Versus will beat it to the punch. I mean what with the release of2 screenshots last week and now a finished scenario, it looks like Versus is closer to being done to me.I'm excited for either one, but it should be clear to all of you which one I want to see more. 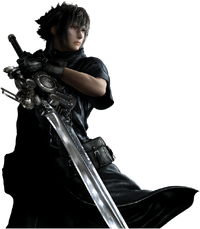 Yep. Little late, most people have one by now, but I just got one. I own Dissidia and Crisis Core so far, and I'm looking to buy Soul Calibur: Broken Destiny. Anyone know if that game was good? Also, any other game recommendations would be super.

With E3 over and behind us, I gotta ask, what company impressed you the most at the festival?

In my opinion, it was Nintendo all the way. I've become more of a Sony man myself as of late, but what with the new releases of all those classic Nintendo series coming back, I gotta say it blew my mind. I'm so stoked for all of them. And the 3DS is just so revolutionary, what with it being a protable 3D gaming system that requires no 3D glasses.

So, what are your opinions? (And for those of you who didn't know or don't care, yes I'm back on this site.)

Yeah, I know what all of you (if anyone is even reading this) will say. Something like this:

"Hey TriforcePieces, you ALWAYS do this. I'm not welcoming you back for a 56th time."

And you know what, that's okay. I respect your decision, because I do in fact come and go as often as the tides crash upon the shoreline, or the warm summer breezes flow across the plains. Aren't I poetic?

For those of you who have known me since the start, you will see I am sporting a retro look with this Vaati icon, which was my original standard back 4 years ago when I started out on this site. Regrettably, I have misplaced my Minish Cap cartridge.*sigh*Also, I had to add a bunch of games to me collection and tracked and wishlist and all that jazz. Sorry if I consumed your feeds, those things are still a new concept to me. I still may have to add more.

So, anyway, E3, blew my effing mind. Particularly Nintendo. Let's cover this, shall we? First off... since my name IS TriforcePieces, I'll start with... da da da da...

So LoZ Skyword Sword is EXACTLY. What I have been waiting for. I'll be honest with all y'all, I didn't care much for Twilight Princess. It was good, but not as good as those ****c Zelda games. But now, here we have a step back towards what appears to me at least to be more traditional Zelda. Not to mention the epic Wii Motion+ that allows for perfect utilization of sword strikes and shield blocks, including making the game specific enough to make you slash a certain direction to beat enemies! I look forward to sparring with a Stalfos or a Dark Nut...

Next, something my good friend seniordk will appreciate as much as me. I say that because he comes and goes on this site as well and may just see this little nod to him I made. At any rate...

I LOVE DONKEY KONG COUNTRY. AND NOW WE FINALL GET A 4TH IN THIS EPIC ****C SERIES. YES. I DON'T THINK THAT I COULD STOP TYPING IN CAPS EVEN IF I WANTED TO. NOT MUCH IS KNOWN ABOUT IT YET, BUT WHO CARES??? NEW DONKEY KONG WITHOUT BONGOS!!!!

Okay, now, I'm a big fan of the K-man. Always have been, since I started playing Legend of the Crystal shards. But my favorite game with the Kirbster in it is probably Canvas Curse. Epic Yarn looks a lot like Canvas Curse in the **** like how paint was so important in that game, yarn is so important in this one. The game revolves around utilizing this yarn ability to, pun imminent, unravel the mysteries of the game. The yarn can change Kick-em-to-the-Kirby's appearance, the stage's layout, and decimate enemies. It's looking mighty fine to me. And yes, I have plenty more Kirbinator nicknames. And puns. Don't believe me? Kirbizzle's new game is SEW cool.

And last but absolutely, positively, never in 1000 years least...:

A NEW KID ICARUS. Yes AND....................... in 3D! I have not personally seen how the 3DS operates first hand, what with my location nowhere near the E3 festival, but I am told it is quite phantasmagorical. Yes that's a word, and yes I used it properly. Finally a new chapter in the saga of Pit. And it's all thanks to Brawl for giving him back popularity. I'm excited for Pit to gain a more in-depth story for all us Kid Icarus fans to enjoy!

I'm so glad I own a Wii. I honestly rarely play it as of late, so rarely in fact that I forgot I owned one.But soon enough, I will have plenty reason to.That's all for now, maybe I'll cover other companies E3 stuff later... or maybe I won't log on again for another 6 months. Who knows? Not me.

YES, I have been absent from this site for a great while now. Is it totally like me to randomly come back with a blog and state no reason as to why I was gone? OF COURSE IT IS! Here's a random blog about the 10 greatest games ever made ever! It's my opinion, don't take it too seriously. Actually, I doubt anyone will even read this anyway.

Feel like telling me your top 10? Go for it. Hell, if I feel like it/remember I might go more in depth with this list tomorrow, saying why I actually think these are the best instead of just obscurely listing 10 titles and saying "DEY ARE TEH BEST-NESS!!!"

Hola. Does anyone remember me? If not, that's ok.Not gonna lie, I probably forgot most of you. I'm terribly sorry for that.

For quite awhile i was pre-occupied with, well, life... and Fallout 3. A LOT of Fallout 3. Greatest game ever. Definetly. I've logged over 300 hours since February. It is GOOD. I have all the add-ons (Anchorage, The Pitt, and Broken Steel.) And I'm looking forward to the 2 new ones (Point Lookout and Mothership Zeta)

If you haven't played this game yet, BUY IT NOW! Post-apocalyptic shooter/RPG with tons of nuclear mutations all in a decimated wasteland. You can't lose with a setting like that.

I'm also mad stoked for Prototype. It looks epic. I would look up trailers if I were you. It's gonna be insane.

I'm not positive if I'll start being active on here again. Maybe? Maybe not? Who knows? Not me. Peace.

I HAVE SOUL CALIBUR IV!!!

DON'T EXPECT ME ON OFTEN!

I'LL BE PLAYING IT UNTIL IT'S BEATEN!

CAPS LOCK IS ON!

A REVIEW WILL PROBABLY BE WRITTEN SOON!