With two new Smash Bros. games in production you're bound to find plenty of speculation in every gaming forum over which new playable characters the game(s) will feature. Not every character has a high chance of making an appearance, but the following first-party Nintendo characters have a high chance of appearing in the game in one form or another.

Here's my personal Wishlist of first-party characters and stages that I would like to see in the next Smash Bros:

My Top 5 Most Wanted First-Party Characters:

Bowser's son would be an excellent small fighter and would have much greater mobility than his slowpoke father. Shooting fireballs would be his specialty, but why not have the ability of changing into Shadow Mario a la' Zelda/Sheik? In that form he can spray out gunk across the stage that would make the other opponents slip and fall, then turn back into Jr. Bowser to finish the job. 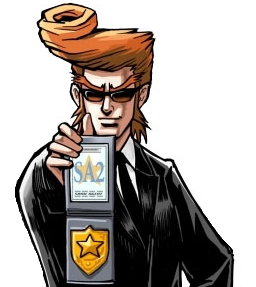 The main reason I want to see Agent J in the next SSB is just to see him attack...by dancing! And coming from a rhythm game his special attacks could be based upon tapping to the beat, which alters what damage he'll do. His Final Smash would summon up the EBA hover pad, along with his other fellow agents, as they tap to the beat causing widespread destruction.

If Samus can turn into Zero Suit Samus, then surely Link can get his alternate canine form with Midna on his back. Grabbing opponents (like Jigglypuff) and then biting them over and over would be priceless. It's Final Smash would be a dashing attack at all enemies, followed by a transformation into Link's human form while Midna becomes his shadow.

Though he already appeared as an assist trophy in Brawl I'd very much like to see Little Mac as a playable character instead. A giant uppercut would be his signature Final Smash. Look out Ike: here comes another heavy hitter.

Sakuri did quote that there will be big customization options for the next SSB. Though it's uncertain that they might be Miis, they would be an awesome playable character. And the best part is: YOU make them! Chuck Norris Mii versus Martha Stewart Mii? Yes please! If only one first-party character makes it into the next SSB I'll be very disappointed if it wasn't this one.

1. Cucco's (Legend of Zelda series)
They're invincible, practically unavoidable, and they're everywhere. Having this pop out of an assist trophy and seeing the look on your friends faces would be absolutely priceless.

3. Ocean Palace (LoZ: Phantom Hourglass)
There's a lot of dungeons in the LoZ universe to set a SSB stage around, but I preferably would like to see this one just for the Phantom Darknuts. Their attacks would be one-hit K.O.'s, and they'll follow you around the stage if they see you. It would be super chaotic and fun at the same time.

2. Epic Yarn Stage (Kirby's Epic Yarn)
It's cute. It's fluffy. It's made out of yarn. Enough said.

1. Battleship Fortress (SMB3)
Everyone must battle each other while dodging bullet bills and projectiles from a random Koopaling. And seeing this all in HD...makes my heart skip a beat in excitement.