Click on the girl with the cheeks full of candy for the review (P.S. it's a good game for you iPhone users).

Anyone got about 2000$ to spare for a flight to Tokyo?

Besides being a totally ludicrous request, I'm still really jealous of those who live in Japan or can afford to fly there for this.

Been a long time for anyone who still remembers me. Life has been hectic, leaving grad school to well, go back to grad school. At least I have my degree in education now and am job hunting for my own classroom. Plan to be writing up more reviews for anyone who wants to read them again. Think I'll go do that right now.

Good to be back.

In case you were wondering about this game (Probably you weren't), here is my review of Hunted : The Demon's Forge and a gratuitous picture of the scantily clad elven heroine E'lara. 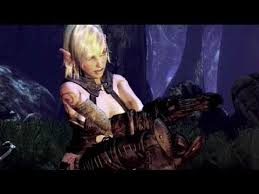 With all of the E3 nonsense going on still I'm hesitant to post my conclusions until it's over with totally.

Hate it or love it, I think everyone on this planet, or at least Gamespot knows what Black Ops is. SBCG4AP is a bit more esoteric...

Anyways, they are posted for your viewing pleasure.

Simply put, as a Top 500 reviewer I intend to put more reviews out there to the Gamespot community, at the rate of at least one per month.

Starting this month is the Fable 3 review, which can be seen here.

Upcoming next is Final Fantasy 13, so stay tuned. Comments and critiques are most welcome as always.

So yea, life has been very complicated lately. Some good stuff has happened (I'm now a brown belt in Karate for one) and other stuff has happened, I won't get into detail, but I'm around again. And I happened to bring a new review to the plate, specifically one for Scott Pilgrim vs. The World.

In other gaming related news on my end of the world, I platinumed FFXIII about 2 or so months back, am close to getting platinum on Fallout 3, immensely enjoyed Call of Duty Black Ops, if only due to the Combat Training portion of the game fighting bots in a stress free less competetive environment, and am touring Albion for the first time in Fable 3.

Yea, I am not a huge fan of most portable games, even most games on the PSP and DS dissappoint me, except sometimes you find a rare "gem", and on the iPhone, I found Crimson Gem Saga. This PSP port is actually a full blown RPG and not just some sort of quick thrown together iPhone app. It's actually a game that consists of many dozens of hours of old school gameplay.

Click on the image for my in depth review.

So, do you have an iPhone 4 or plan to get one? If the answer is yes, then you must know about the issues with reception and dropped calls supposedly plaguing it. I have one, and have tried to put it through multiple tests and compare it to my old 3G model. So here goes my attempts to repeat all the errors and reception problems.

1.) General Reception : I get full 3G coverage on campus when walking around, and anywhere from 1 to 4 bars inside depending if I am far in the building or in an elevator or what not. This does not conflict with my old 3G's behavior, no better no worse.

2.) The infamous left hand dropped calls and signal power. Yes, if you do hold it with your left hand and touch the little black lines on the sides seen on the image above, you might lose a bar or two due to the stupid design of making the antenna part of that metal casing. However with 5 bars of service or 4 you might not even get any drop in signal. I only experience this problem when you are in a 3-4 bar area that is less than optimal.

Standing in the window in my office I had 4 full bars and I tried to squeeze the crap out of the phone with my left hand as many videos have done, I had no more than 2 bar dip, which may be unacceptable to some, however try as I might, I was not able to cause a call failed in 8 minutes of talking to my dad as part of a test. I also spoke for half an hour the other night with no loss of service. Essentially I need more trials, but I cannot get it to drop a call on me yet. Yes, I cannot intentionally try to get it to drop a call in reasonable reception areas due to the "flaw".

There is however one definite problem that I notice, and it doesnt necessarily contribute to the signal (I did not notice a decrease in bars when experiencing this problem), but it clearly interferes with the quality of the call.

You see those little black lines I keep mentioning, there is a 3rd one on top of the phone near the headphone jack. When touching that plus any of the other 2 bars on the side, you get a severe amount of distortion and loss of volume on the other side of the line. Ask yourself this though, who hold the phone like that? It's actually quite difficult to even pull off in one hand, although it is something that has been a recurring issue that I can replicate.

So there is some truth to Steve Job's claim about the statements of the iPhone 4 not being flawed and dropping asignificant number of calls. To even get a noticable performance loss you really do have to be messing with it outside of what most people do consider normal cell phone use. I'm not saying this to defend apple, I'm saying what I actually experienced.

3.) Actual performance of data transfer : While this is a qualitative assessment, the loading speeds on this phone when using the internet or Itunes is actually quite fast, even with 2 or so bars of service, noticeably faster than on the 3G model of mine, even when it was brand new and 5 full bars.

4.) The "key shorts it out" video : I tried the same exact thing of putting a key over the black bar on the side. It actually raised the amount of reception for a second before going back to the signal intensity that it was at prior to putting the key on it.

Again this is not an exhaustive trial of the phone, I intend to work with it more as time goes on and test things, but it essentially in my experience is not nearly as flawed as half of the videos on youtube claim it to be. I don't doubt that some people genuinely have these problems, but in my experience I've been at least as satisfied with my 4 as my 3G. Besides if something comes up I still have 27 days to return it. But I don't think that will be the case.

Anyone who has one, feel free to comment and compare notes. I will be posting more information either reaffirming my thoughts and experiences or finding that I was just lucky.

Disclaimer : If you don't know much about Persona 3's gameplay and general concept I suggest reading this review first:

Otherwise, this is an overview of the differences in Persona 3 : FES vs. Portable. I.E. its shorter.

Yet another Final Fantasy Spinoff I've reviewed. This one is short, promise.

Click on the image that is probably cooler than the game itself for the link to the review.