Well yes, I have been a lot more active on Gamespot lately. The thing is that I am getting used to the new forums and the new gaming generation. This means I got to level up cause I am still at Level 21 and it has been like this for quite some years now. Besides that I am thinking on writing some reviews and help the Gamespot community a little bit. :D

Now as for the gaming part. I have been playing some Indie games for PC lately because I am having my PS3 repaired (and I can't seem to find my PS2 memory cards -.-) I have found some pretty interesting games such as :
1.Machinarium:
A puzzle game situated in a dumb city populated by robots. You get to play as a tiny robot going through levels trying to avoid thieves and help other robots. You basically play orienting the little robot with the mouse and mixing pieces you find in the surrounding world to complete the puzzles.

2.Crayon Physics Deluxe:
If you were good at physics (which I was not >_< ) you would like this game. All you have to do is draw objects to make a ball reach a star. Now the trick is to use gravity at your advantage. Let the imagination get to work my friends. This is a great mind wrecking game.

3. World of Goo:
This one is clearly the best Indie game to be ever made. You build oil drop constructions to reach a pipe. Simple as that. And fun as that :D 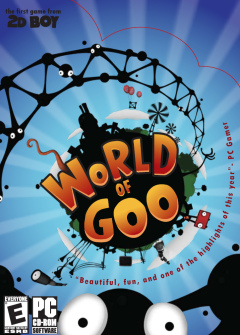 I have been listening to Joe Hisaishi a lot lately and I must say that he is a total genius. One of the best composers to date. He has been working on the Studio Ghibli movies soundtracks for quite a long time now and his absolute best work is the "My Neighbor Totoro" soundtrack, try listening to "The path of the wind" it is a masterpiece. Hisaishi has given a great deal of help to the world of music and he is absolutely one of the best out there. Give his songs a try. You will not regret it.