#1 Jeff
Member since 2002 • 4005 Posts
Reviewers are currently playing the retail disc and I'm pretty sure none of them had to have their accounts added to some "please don't ban me" filter. Ours definitely didn't. So I wouldn't worry about it.
15 years ago

Isn't that already in the "About Our Rating System" page?I guessyou're right that the typethat flies off thehandle about game scores won't look that hard for information, though.

Yeah, we address this stuff pretty clearly in the pages about our rating system and invite users to look that over if they have questions.

Well, just to quickly address a few things I've seen in this thread...

- Should games be given scores at all?

Yes, most definitely. While some writers like to prattle on about a world without scores, that's a very narrow view. With the millions of people that visit this site in any given month, we encounter a lot of different types of player. Some people have all the time in the world to research a game and devour every single piece of content we produce. Others don't. Some people need that shortcut, and a score provides that quick check for some people that should either let them know that they probably don't need to know much more about a game or that they need to read more before making a purchasing decision. And make no mistake, that is the reason why our reviews exist: to assist people who are considering a game purchase.

- Does giving a game a score promote fanboyism?

Anything anyone does ever promotes the sad mentality that the Internet is fostering. The other day I read a full thread on another site of people arguing about Blu-Ray vs. HD-DVD with the exact same idiotic fervor that some people use here to "discuss" video games: by turning message boards into Debate Club Amateur Hour. Think about how insane that is for a minute...

"DUDE MY WAY OF WATCHING MOVIES IS SO MUCHMORE AWESOME AND MARKET SHARE AND ATTACH RATE AND OTHER BUSINESS TERMS THAT NO ONE SHOULD ACTUALLY CARE ABOUT!!!!"

"NO WAY U SUCK MY WAY OF WATCHING MOVIES WILL WIN!!!! ALSO I OWN A MAC SO I ALSO HATE YOU BECAUSE I HATE WINDOZE! DID YOU NOTICEI SPELLED IT WINDOZE ISN'T THAT FUNNY BECAUSE IT MAKES ME SLEEP IT IS SO DUMB! ALSO: MICRO$OFT! SEE WHAT I DID THERE??????"

...it used to be limited to local pockets of people complaining about how the Amiga is better than the PC, but our connected world now allows someone to spew nonsense that the entire globe can read about topics such as "WHY I THINK FIREFOX IS RADICAL AND THEREFORE YOU ARE SUCK." Seriously? We're going to waste time arguing about which freely available web browser is better? The relatively anonymity of the Internet is making the world uglier every day, and it's a real bummer. Also, pointing out that "you can format a disk on an Amiga and still use the OS" was never a very good argument for why it's better than the PC. But all that is probably a little off-topic for this discussion.

- Do review scores exist to help us figure out what to buy/spend our time on, or do they exist to validate our own opinions?

See above. We write reviews to assist people looking to purchase them. If you want to use them to try to validate your own opinions, go for it, but you're using them wrong. We're not here to make people feel better about games they pre-ordered because they saw a sweet trailer. We're here to cut through the TV ads and trailers and all the other stuff out there designed to get you to buy games blindly, and help you spend your money wisely.

"I do agree that a 10 should never be used, even though its in the scale. Main reason being that reviews and scores are subjective. A 10 would imply that a game is so great that everyone will love it and want to play it."

Maybe on your own double-secret personal review scale. On ours, it means that the game couldn't be improved upon in any meaningful way, given current standards for that game's platform. As part of the review change, we relabeled 10.0 as "Prime" instead of "Perfect." The meaning of the score hasn't really changed, but too many people couldn't handle the concept of perfect meaning "perfect... given current standards for that game's platform and blah blah blah blah blah." It was sort of silly and overly confusing that way, I agree. We will give a 10 again someday, by the way. I occasionally see people saying "GameSpot said they'd never give another 10." That's insane and we've never, ever said that.

But this touches on a larger point. Reviews are only a guide. They are not gospel. If you aren't filtering our reviews through your own personal likes and dislikes, you're eventually going to end up missing out on a game you'd like or buying one you hate. We assign reviews to qualified reviewers who are interested in that style of game and, ideally, enter the review feeling cautiously optimistic about it. So when people say "I only play games that GameSpot gives a 9.0 or higher to," I'm a little bummed out. I mean, thanks for believing in us and all, but really, you're probably missing out on a ton of games that you'd love. If we give a game a 7.0 and it's a type of game that you usually love, you should probably read the review for more information. And while we certainly think extremely highly of a game that gets a 10, even that can't be a guarantee that it'll be one of your favorite games. Except for Tony Hawk 3, of course, which is one of your favorite games.

To use the Review of the Moment as an example, when we give Ratchet & Clank Future: Tools of Destruction a 7.5, we're not saying it's "average" or something. This isn't school, and a 7.5 doesn't translate to a C+. We're effectively saying that fans of these sorts of action platformers, and to an even greater extent, fans of the Ratchet series, will probably have a blast. But we're also saying that its appeal might not extendso far beyond that group due to issues mentioned in the review text.

And, really, that's the part that makes the whole "disagree with review -> let's riot" mentality so silly. In most cases, we're actually recommending the games that we supposedly "hate" and "were paid to score poorly" or whatever.

You can find our review philosophy at the following link:

We've removed scores from the video itself for logistical reasons. To make a long story short, the score is the very last thing that is decided on before a review goes live. So that holds up the entire video review rendering and publishing process.

With our new video pages, the score is displayed right next to the video for easy access.

This review is currently being fixed and should be ready within the hour. Thanks!

It's certainly something we've thought about doing, as the thing about running a website is that anyone can see any review at any time. But there's no formulaic way to do that because some games hold up better than others. In order to do this properly, you'd absolutely have to do it manually.

Instead, as we state in our review guidelines, you need to take the game's time of release into account when looking at scores. Standards for games change, which influences the way we score our reviews. So, yes, at the time of its release, Grand Prix II was a 9.5, and Grand Prix 4 was an 8.0. But, obviously,you can't directly take that to mean that GPII is better than GP4.

It might have something to do with the way iTunes caches XML files. When we post the podcast, the same mechanism that updates the pages on our end also updates the feed that RSS users, including iTunes users, see. So there's no delay at all... iTunes even points at our servers, so it's not like there's a file on Apple's end that isn't getting updated.

Short answer: try closing iTunes and reopening it, then right-click our feed and hit update. That usually works right away when this happens to me.

I recommend you start paying more attention in math class.

#10 Jeff
Member since 2002 • 4005 Posts
Because there are about a million different so-called "unified" PC profile programs like that, and we don't officially endorse any of them.
15 years ago 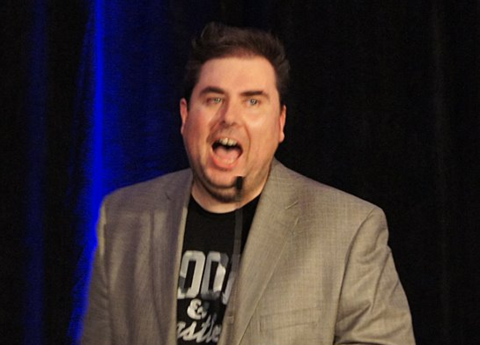