That means my dad's gonna be cooking his mega burgers stuffed with avacodo, mushrooms, and meat hanging off the bun. :cool:

And there's not much else to say. It's good that I could get a blog up and running again even if it's a short one.

As the title suggests, I'm now in the market for a 3DS. I'm thinking red and black.

My philosophy is that a system or peripheral needs at least 4 or 5 good and worthwhile games before I consider buying it. I think the 3DS has reached that point.

Here are the games I had in mind for purchase:

But then I thought "What's the point?" Most of what was shown at the press conferences wasn't all that spectacular anyway, so why do you me telling ya'll this? I've also been pretty tired coming home from my summer job everyday, and haven't felt up to rewatching the shows and analyzing them. By the time I get around to it, this will all be old news and irrelevant.

Besides, if I did make some long, in-depth blog on the show, it would mostly consists of lines like "This was good,. That was OK. This is dull. I don't care." I doubt most of ya'll would find that interesting anyway.

For starters, I wanted to thank champ and the other guys from GUFU for throwing that Halo Reach gamenight. That was fun and we should do it more often.

I haven't had much to blog about these past few weeks, and I'm usually too tired from work to want to type it up anyway. But if you want to know how my summer's been going, it's been going well, made even better since my semester grades came back with all As and one B. Hello, scholarship checks. :cool:

As far as gaming goes, I've mostly been going in and out of Diablo 3 and Team Fortress 2 with some other games on the side. I was also able to finish a completionist runthrough of both American Nightmare and LIMBO. And before you guys ask, no, I don't feel like getting Torchlight II. I have Diablo 3, and I'm already overloaded on the fantasy games. I'll likely get The Withcer 2 EE long before I get Torchlight.

For the series I planned to revisit this summer, I settled on Max Payne. I've been hearing a lot of good things about the 3rd one and this is as good as anytime to give this series another go. Like God of War, I only played the first game that I borrowed from a friend a few years back on PS2. About a year ago I bought the second one also on PS2 and only got 10 minutes into the game when I realized how much of poorly-controlled, ugly mess it was and soon after returned it.

Since I usually like to keep my franchises contained to one system, I was going replay the first two games on Xbox. I ordered the first one off Amazon a week ago. Then I read how better suited the series was on PC. So now I'm just going to download the first game off Steam and resell the Xbox version once it comes in the mail.

And that's about it for now. I'll be sure tune in to the E3 conferences and share my views on them.

Well it was a rocky road, but I finally got Diablo 3 up and running. Bad news is that I won't be able to play it until the weekend. :(

In the mean time, you all are free to add me. My battle.net tag is FireSpirit#1136.

Because I felt like boosting my trophy collection, I decided to give Killzone 2 a revisit.

Thoughts? Eh, it was alright. The gameplay was still fun and intense. The graphics still look good even if it hasn't aged well in some areas. And of course all dat gray. So much gray. Ever feel like you went colorblind?

You know it's funny how this series keeps getting compared to Halo. If anything, it's more like Gears with its gritty tone, emphasis on cover, and cast. Speaking of the cast, Rico sucks. He's probably my least favorite game character next to the David Spade Sparx and Zeke from Infamous. He's nothing but a loudmouthed, angry douchebag who gets his friends killed and ends up causing even more death for his fellow soldiers. When I was playing, I liked to mockingly imitate his voice so I could get some enjoyment out of his f-bomb-laced whining. :P

Overall, I still liked it. Is Killzone 3 any better? I might pick that up some time this summer.

I just got out of my last exam and it feels good. Now I can take a much needed break, at least until my summer semester starts in July.

Oh, and I saw The Avengers over the weekend. That was pretty cool. Sorry I don't have anything else to bring up. I know ya'll don't want to hear about the boring details about my domestic life unless there's something game or movie related attached to it.

And that's all for now. Later.

That's how my physics final went. Only one more to go. :(

On a side note, what do ya'll think about the new comment system? I want to test it out and see for myself.

Also, whoever commented on my last blog, tell me what you said because the new system was addded before I could check your post. Speaking of my last blog, I decided not to revisit God of War. Instead I'm going to set my sights on Silent Hill this summer. I've already played the first (which was ok), and now I'm eager to see what the rest of the series is like.

UPDATE: I started using the new comment system and already I hate it. Thank you, GS!

Even though the semester is winding down, I still have a little more studying to do so I'll keep this one short. 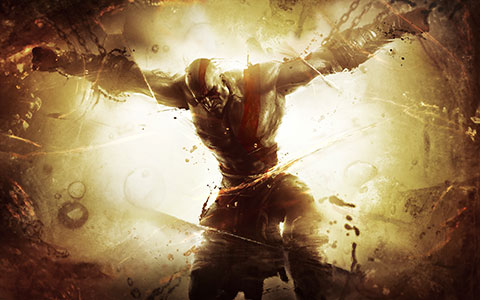 Since God of War: Ascension was recently announced, my interest in the series has gone up considerably. The problem is that I haven't played much of it to begin with. I bought the first game used about 2 years ago and then sold it after I beat it. It was alright, but there wasn't much reason for me to keep it at the time. Since I normally use the summer to catch up on game series I missed out on, this is as good as any time to revisit God of War. I'll start with the HD collection of the first 2 games and see where I go from there.

So I finally beat The Witcher EE this week. I sided with the Order, fell in love with Shani, and saved the princess. All in all, this was a good game that I greatly enjoyed. One minor complaint I had was with the final villain. Like Skyward Sword, it kept the far more interesting villain hidden until the last 15 minutes of the game. But again this was minor compared to everything else in the game. It'll probably be a while before I get around to playing Witcher 2.

And that's it for now. Back to studying.