Just turned 22 today! freedomfreak threw me a similar birthday bash, but I'll go ahead and throw one here as well. :D 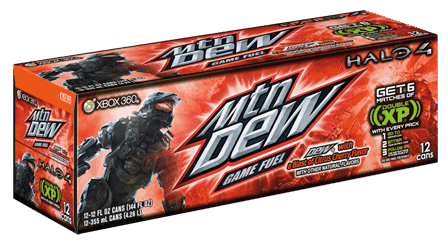 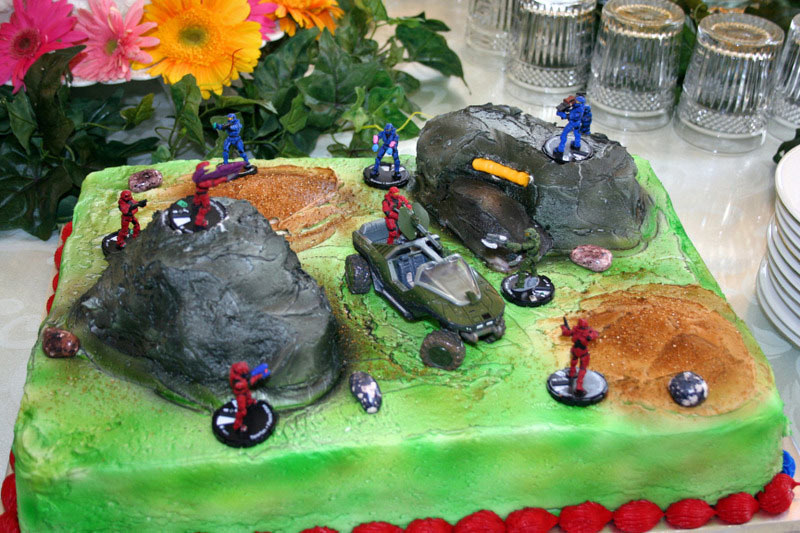 I've been meaning to talk about my experiences at RTX, but I've just been too busy to sit down write about it. Expect more of that later this week.

I've mentioned this in a previous blog, but I'll say it again anyway. This weekend I'm going up to Austin for the Rooster Teeth Exposition. Words cannot describe how insanely excited I am to be going. RT are probably the only group of internet celebrities I thoroughly respect both as an entity that makes funny videos and as people. They were a major reason I began to take gaming more seriously. Now I get a chance to meet them face-to-face. It's gonna be sweet!

Other cool guests that'll be there include Richard Garriot (Lord British himself), Earl Alexander (the voice of Louis from Left 4 Dead), Jen Taylor (voice of Cortana from Halo), The Behemoth, 343 Industries, and Devolver Digital just to name a few (I get to play Hotline Miami 2 before most of y'all so ha ha :P).

While we're still on the subject of Rooster Teeth, Red vs Blue season 11 is underway and hillarious. They also launched a new gaming podcast, The Patch, that I recommend checking out. It's probably the first gaming podcast I can tolerate because they don't approach the games they talk about like a review site would. They're very fair and balanced about the games and news they talk about and never break down into fanboy rants.

Oh and one other thing: I recently beat The Last of Us. Very great game. Not entirely the "Citizen Kane of gaming" that I keep hearing, but a great game none the less. It's my second favorite game this year right after Bioshock Infinite (they're the only 2 games I've bought this year but still). I'll try and make a review for it and Bioshock when I can. 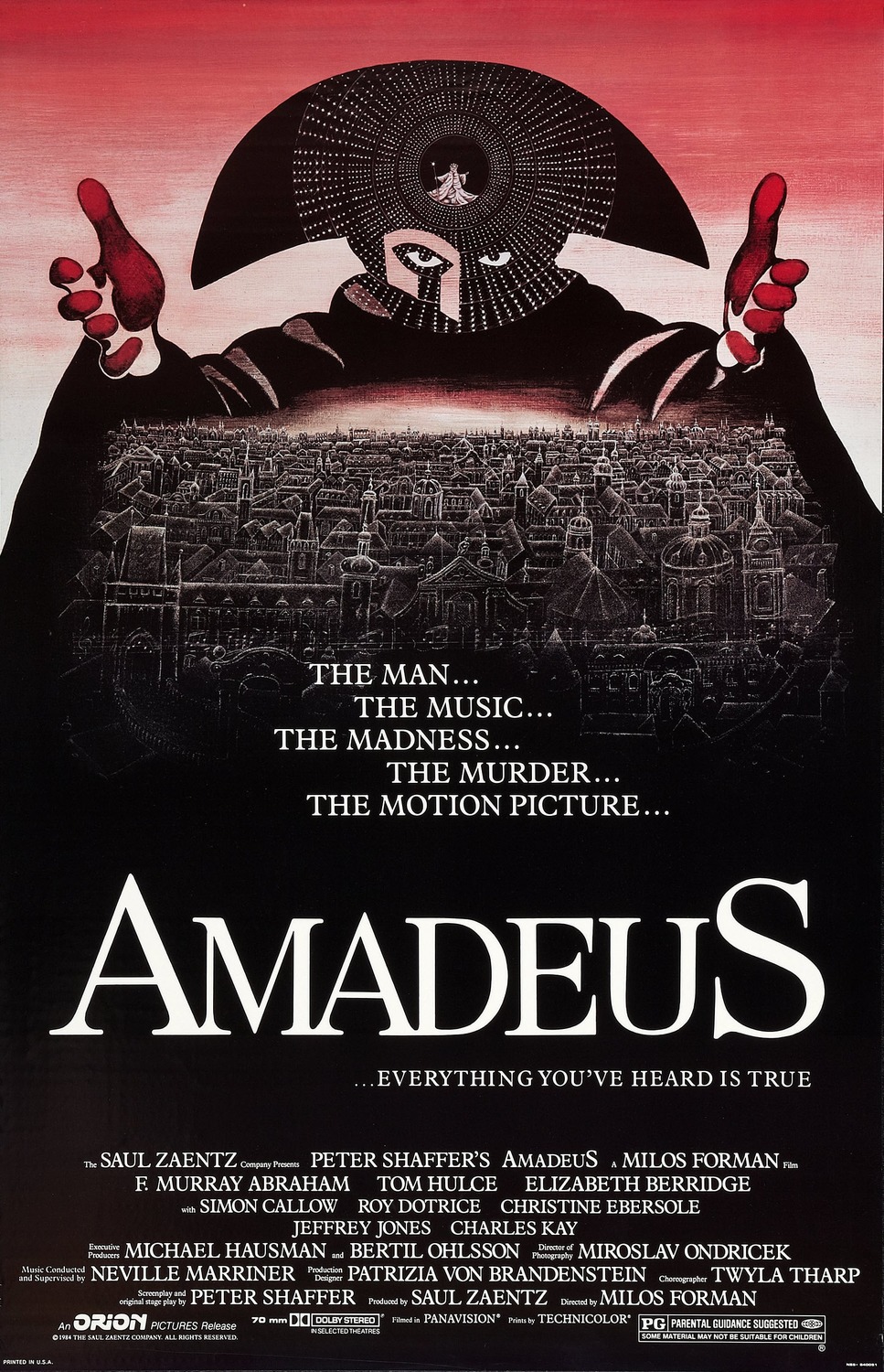 A while back, my local Blockbuster was holding a going-out-of-business sale (despite the fact that alot of people including myself still rented movies there :roll: ) and one of the movies I threw in my bundle was Amadeus. Now, keep in mind, I tend to stray away from certain movies I consider "Oscar-bait": overly prentious, "artsy" movies that snobby critics tend to go nuts over. But I was curious and the movie was cheap, so I went ahead and bought it. And now I've seen it.

And in this case, the snobby critics were right. I freakin' love this movie, from the acting, the drama, the humor, the music (Oh GOD the music!).

While I'm talking about movies, I also went to go see Man of Steel over the weekend. Right off the bat, I can say this was basicly the DBZ movie people have been wanting for ages (I'll let that speak for itself :P). Also, despite all the mixed praise I had heard, I thought it was a pretty good movie overall. WAY better than Superman Returns by a longshot. The non-linear narrative took some getting used to at first, but everything else I tought was fine (aside from maybe some minor product placement annoyances). I also thought Henry Cavill was a good Superman.

I'm planning on seeing World War Z next. I don't care if it has little to do with the book (which I haven't read anyway), but it still looks like a pretty intense zombie movie regardless.

Is it that good?

And if so, what system should I get it on?

What? You expected me to talk about E3? Nah. I'm sure there are plenty of users who will be more than happy to talk your head off over E3, but I'm not one of them.

Anyway, what's new with me?

Well I took up a part-time summer job working as an intern for the Harte Research Institute here on campus. Right now I'm set up in the coastal and marine geospatial lab archiving scientific reports into the institute's database, but I'll also be collecting data in the field as well. It's a paid internship and it counts as a summer course, so I'm very happy about this.

Now here's a con I can get excited for! On July 5-7, the annual Rooster Teeth Exposition will be held in Austin, Texas, and I just got my ticket.

I don't know about you guys, but I have been a long time fan of Rooster Teeth ever since I picked up seasons 1-3 of Red vs Blue at a GameStop back in 2005. I've had a huge admiration for them not just because of their influence Halo, machinima, and gaming in general, not just because they started out and base themselves in my home state, not just because they're funny, but because they are one of the few internet icons that I actaully respect. They only do the stuff that THEY want to do and only talk about the games that are fun for them (so suck it System Wars).

Now I get the chance to see them in person. Can't wait. In the gaming corner, I did an achievement runthrough of Bioshock Infinite. For me, the game was waaaaaaaay better the second time around, though I'll save all my opinions for it for another blog. I'll maybe even do a review of it. I also started playing Metro 2033 (something I kept from the THQ bundle a while back). So far, I've really been digging the game's atmosphere and limited approach to gameplay and inventory. Oh, and I'm gonna be picking up The Last Of Us this Friday (same day as the RVB season 11 premiere :o). So what if GS gave it an 8? In fact, so what if GS gave it anything? The game looks awesome and I'll have fun with it. The End.

Oh, and one small shout-out to Theon Greyjoy after recent events from Game of Thrones...

Finished my last test, today. My mind is mush, I'm exhausted, and I'm glad it's over. I'm gonna play some Halo.

Tomorrow, I get to see Dr. Robert Ballard, the famed oceanographer who discovered the Titanic, Bismarck, Yorktown, and many other famous shipwrecks, give a speech at my school. Luckilly, I was able to snag a ticket before they sold-out.

So you can imagine how excited I am to finally meet with one of my childhood icons and sources of inspiration. I can't wait.

The mother of my soon-to-be stepmother is dying from congestive heart failure. It pains me to see such a sweet old lady on her deathbed like this. Sorry to be a downer here, but it would be greatly appreciated if y'all lent me, my future stepmom and both of our families your wishes, prayers, and condolences. It's been really hard for us.

Well it's reached that boiling point again where I can't stand SW anymore, not even ironicly. I would say it suffers from a case of too many idiots in one place, but I think this time it goes much deeper than that. Nerd culture in general just seems to irritate me.

So yeah, SW, rot in hell. Don't expect me to be on that thing for a long time (Yeah I said this a not long ago, but this time it's really passed the point of no return for me). It sucks. Period.

Expect to see me more on this blog, off-site and on other GS boards.

Lately, I've been wondering why we don't see very many "teen" rated action games these days, particularly shooters and adventure games in general (and maybe WRPGs too). Think about it. There seemed to be more of a balance in T and M rated action games last gen and earlier this gen. You don't see much of that these days, as far as the big name franchises are conscerned atleast. Like how often do you see a T rated shooter for instance?

The few big name T rated action series that come to mind that aren't movie-based are Uncharted, Alan Wake, and the Batman Arkham games. Everything else is pretty much M.

Can't say I'm surprised though. People seem to buy games regardless of their rating or content, and devs seem to be taking note. To them, there doesn't appear to be much reason in toning down their content in order to get a wider audience (like it is with movies), because the "wider audience" will probably get it anyway. It's like why bother?

For the record, I'm no prude. I have an extremely high tolerance when it comes to game content. And I can understand if a dev wants to push their game content if its legitimately from their creative interest and not "because we can I guess". Still, I don't think it would hurt if there was more of a middle ground when it comes to action games.

P.S. I'm going to be out of town tomorrow and Saturday, and won't be able to reply via mobile. So if you get a "like" but haven't gotten a reply yet, that's why.