Yea, I know I have not posted in over a year so sorry. I have started a new blog at Scifi-Meshes. Here is the URL: http://www.scifi-meshes.com/forums/blog.php?u=5710

While I am here, though, I thought I would post about my happiness over the WGA strike and the conrtibution of the Executive Producer of Battlestar Galactica, Ron Moore. I wish the Writers luck and hope it is resolved fairly quickly. 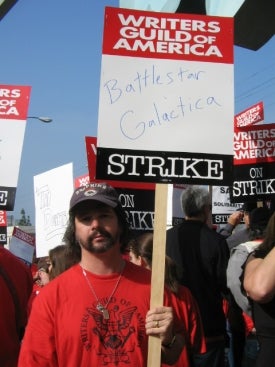 As you have probably deduced I'm on a long weekend. That meens being lazy and my paretal units forcing me to do labor. Ok, that's an exaduration, I only had to spend an hour on Sunday transplanting plants gor my mom. Wait, that was on the Sabbeth, that foes agenst the ten commandments! Moving on.. I tried to download the 2142 Demo Friday and it would have took 13 hours. So I waited until Saturday and downloaded it from File Planet. It took an hour, including the line before hand. I highly reccomend it to all people who don't want to wait 13 hours. Now I've saved the best for last, discussing the primier of BSG!!!!!!! Two hours of fun, shooting, plotting, and suicide bombers. It was pretty good. Until next time. DarthMcWord out!

Well I've been in school almost a month and it't not so bad. My teachers are nice, the material isn't that hard. But there is one thing I hate about this September, it's not October. One might ask why I think that? Well a few reasons. First, Battlefied 2142 doesn't come out 'til October, and boy it's gonna be great! Also, and the most important reason, Battlestar Galactica's 3rd season comes on October 6, and I've had to wait 6 long months for it (ok not THAT long). On another note, if you read my blog, please post a reply just so I know some people are reading it. Well, thats all for September. Expect another entry the weekend of October 6. DarthMcWord out!

P.S.- A monment of silence for the 9/11 victims and their families.

Well, the time has come, summer is ending and, for me, school is starting, tomorrow. I probably won't be  posting as much but I am going to try to be on as often as possible. I'm just wondering, for those of you who are still in school, when do you go back? On a happier note, a new instilation of the Battlefield series has been announced! Battlefield: Bad Company. It is supposted to have a better, more in depth single-player campaign, as well as the traditional Battlefield multiplayer, whis is a nice change. Finally, for those of you that watch Stargate SG-1 and don't know yet, the show has been cancalled. At least Atlantis has been renewed for a fourth season. That's all for now. DarthMcWord out!
Well here is my first blog entry... Yeah... Ok. I may have more.