What the hell is this?

I've had a good break from Gamespot for the last few weeks... Eh... Well break, it's more me leaving but I was starting to feel bad about leaving without telling anyone. :P

So yeah, I'm finally saying goodbye to this place. You guys have been awesome and I owe most of my English knowlegde to this site.

I won't get into boring details but I'll repeat one and last time if anyone wants to play a game/talk with me add me on Steam (Pumbli) or PSN (DPumbliQ).

So long Gamespot, it's been fun! :D

A good friend of mine and I have created an off site gaming forum called the Gamers Grotto.

It's a small place (for now? :P) but if you want to be a part of a great group of people and not live under the (ever-so-often) very unfair rules of the GS admins and mods then please check us out.

I'll tell you about some games I've been playing recently! :P

I love the Battlefront games. Although I did play the first one on PC many years ago I hadn't played the second one on PC (until recently). I bought it during the Steam Summer Sales for a small price and only got around to playing it last week. It all came back to me, all those glorious battles. The ability to play as Darth Maul and Grievous (still bummed for lack of Qui-Gon). To make up for the short campaign you have the galactic conquest, an awesome game mode imo. 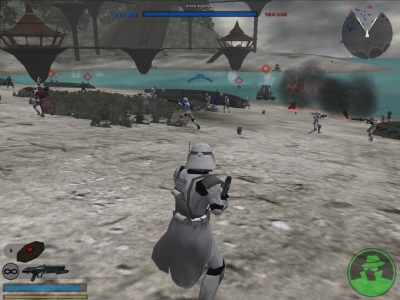 Ever since I played the demo of the first Mount&Blade I've never been able to stop playing these games. I recently downloaded a mod called "Europe 1200", which is basically Europe back in 1200 AD (Surprising, I know). I've been fighting for Venice and it's all been great. Not only is this game great on its own, the mods make it ten times more great.

:D (And no, that's not the wrong game. That's Mount&Blade)

It's Vegas baby! For some reason I've come to like this game even more than I liked Fallout 3 and that's an accomplishment. Fallout 3 is an excellent game but New Vegas just has something about it. I don't know what it is but I like it. I don't get any achievements because I used the game's console to make an item I couldn't be bothered finding around the start of the game. I don't care much though, I prefer the occasional console cheat to achievements. :P I play this way too much. Want proof? Here, have a look.

(This blog was also a test, usually can't post this many pictures without html errors :P)

Well in just a few hours the sale will be over. I've bought way too much in this sale. I'm going to (mainly for my own amusement) to count up every single thing I bought at this sale, here in this blog.

I'm pretty satisfied with my purchases. :P
What did you guys get?

Yeah, this island is erupting again. So far the ash cloud is headed for Greenland so no worries for European travelers.

Here's a link for all of you, it has a picture and everything. :P

About a year after I got my PS3 I found a site that told me how to take care of my PS3 and prevent it from getting the YLOD. For almost 3 years that black beauty ran like a dream and when it reached the end of it's days with an YLOD I can't say I was terribly surprised.

After paying about $270 to get a refurbished console, I thought I'd be able to enjoy at least a year or two out of the new one. But things took a turn for the worse about 4 months into my ownership when I got my second YLOD. (Keep in mind that I clean my PS3 every other week and keep it in a vell ventilated area)

Since I got a new varranty with my second one I got my 3rd PS3 just a day later. Now, I thought this time would be the charm but nope. 3 months and bam, death. Again, I get a new one. I didn't know what to think anymore, I just hoped this wasn't a heap of junk like the others. Turns out, it was.

3 weeks. Blu Ray drive fails. Now wer're getting to recent times, exactly 21 days ago I walked into the store where I got my old PS3 and got a new one through my warranty. Today, my 4th PS3 got the YLOD.

I'm done with the 60GB. I'm so freaking done with it that I was close to throwing it through my window when I saw that disgusting yellow light. I'm going to get myself a new 60GB PS3 (my 5th one!) and then pass this curse unto another unsuspecting citizen. It's probably bad karma but hey, at least someone will get to enjoy a new PS3 every month.

I'm planning to buy a 320GB Slim model, I actually can't wait to get that heap of junk old monster out of my house!

Also, my exams are coming up so I may be less on Gamespot. Next Wednesday I'll take a little trip to the countryside and be away from computers for the most part for about 5 days. :P

Thanks for reading, if you did. :P

Did anyone check the Gamespot Shippin' out news this week?

Good stuff, although if you check the comment section you'll find a man who hates CoD, he hates everyone who likes CoD and my sources claim that he's not a big fan of Trout either. :P

Anyways, I got reported for pointing out how angry he was, claiming I was insulting him.

Can you imagine... Me insulting someone? Preposterous!

I guess telling someone to go watch his Justin Bieber videos is insulting to Gamespot. (Haha, oh the irony :P)

Just wanted to warn ya'll, don't post positive things about CoD in that news article. Bad things will happen and have happened. I should know... I was there... None were spared... Not even the women and children... :o

Have a great week everyone! :P

Seriously, Creative Assembly! What the hell?!

So I decide I want to play Empire Total War on my new computer today. After taking about 20 minutes to install and another 20 to patch itself, it looks ready to play.

Oh boy was I wrong. The game freezes at start up and drags my brand new computer down with it. "It's no biggie" I think to myself, I'll just reinstall the game and all will be fine. Nope, same thing happens.

Feeling rather dissappointed at that point, I decide to take Medieval 2 Total War for a spin instead then.

The install starts normally but about 3/4 through an error pops up "Error: Data Error (cyclic redundancy check)". "Strange" I think to myself, cancelling the download and taking out my disc to clean it before inserting it again and giving the install another go.

Guess what? It happens again!

Seriously CA, WORK ON YOUR GAMES! You nitwits! I've been nothing but a loyal fan to those imbeciles and this is how they repay me?! Listen to your goddamn community. Don't ignore problems people have. I've tried looking for ways to fix this but they either fail or I have a hard time understanding them.

People shouldn't be supposed to go through all this. To be honest, I just don't think these games are worth the trouble of trying to fix them anymore.

Heh, I bet Napoleon's like this too. I mainly blame Sega for this. The Total War series has only been crashing since those morons took over.

You better make Shogun 2 a freaking miracle for me CA. I'm so tired of your glitchy Total War games and quite frankly, I'm tired of you.

I'm going back to Civ V.

Sorry, just had to let that out. :P

What's better then writing a blog on a nice Saturday morning? :P

Since GamerGirlPwnz doesn't let me post comments on her blogs, I'll put my welcome back to her here. Welcome back GGP! It's nice to see you come back to us every once in a while. :P

On a sadder note; my computer parts got delayed. :| Or well, only one of them got delayed. My little i7 processor is making it's way to Iceland as I write and I'll get it either on Tuesday or Wednesday. Meh, I'll live. :P

Has anybody seen The Princess and The Frog? WARAGARBLRG! It's like classic Disney all over again! :P The villain rocks, the characters are awesome, the romance is cute, the songs are great (my blog title :P) and the movie's just overall epic. Great stuff! :P

Have a nice weekend everybody! :D

Update! So I realised this morning that I need to play Pokemon Heart Gold. So what did I do? I went out an bought a Nintendo DS. :P Woot!