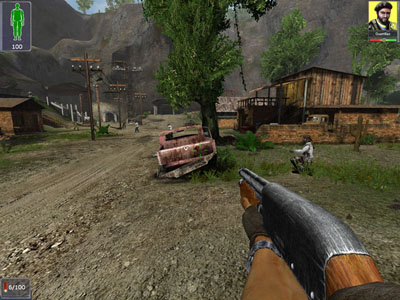 Buggy and frustrating, Boiling Point really shouldn't be as addictive as it is.

I was struggling to find a game to place 10th on my list. I had the first five pinpointed within a second, but as the list lengthened, my options dwindled. It was then that I remembered Boiling Point: Road To Hell, a product of European ambition and suitably buggy.

It's a sandbox game in the vein of GTA, but played from a first-person perspective. A little like S.T.A.L.K.E.R. then, though I've never played GSC's addition to the genre. And if I had played S.T.A.L.K.E.R., I'd have probably found it a whole lot more polished. All the same, I don't feel bad for putting Boiling Point on a list of my favorites because, once you get into it, it's impossible to put down.

It follows the sandbox "rules". A huge map, diverse factions and vehicles to traverse the game-world. It could have been crippled by the bugs that vary from comical to game-stopping, but it isn't, and it's a testament to my insatiable appetite for the game that I persevered despite the hindrances.

Graphically its no marvel but there is no denying that the tropical island of Realia is vast and worth exploring. There are snakes that slither through the grass and other appropriate animal life. Providing your PC is powerful enough, you can fully appreciate the dense foliage and with the bloom effect turned on, you find the game surreptitiously enhanced. When I originally reviewed the game I didn't give it enough credit. There isn't much else out there like it, and while many will likely plumb for S.T.A.L.K.E.R., Boiling Point is certainly worth a look.

There are many better games out there from a traditional standpoint (more polished, better looking and less frustrating), but very few as ambitious -- the fact that Boiling Point halfway succeeds with this ambition is reason enough to give it a go. I'm playing GTA 4 at the moment and, in comparative terms, Rockstar's magnum opus is far better. It's more detailed, better designed and a whole lot more varied. All the same, Boiling Point is the only game that has frustrated me to such a degree, yet kept me playing. If that's not reason enough for it to make this list, what is?