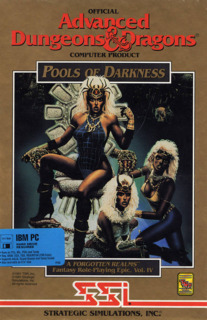 User Rating: 9.5 | Pools of Darkness PC
By df853 | Review Date: June 9, 2008
Pools of Darkness is a very old school game, that as far as I know only works on DOS-compatible computers. If you are not a fan of old classics, you should give up and quit reading this right now.

Pools of Darkness was based on the same basic engine as the previous AD&D games by SSI, with some improvements such as mouse availability and better/more graphics/sounds.

What an SSI brand AD&D game is like (for those who've never played):
- Games are set in a medieval-style fantasy world with dragons, giants, wizards, etc
- You create 1 to 6 characters initially. You choose their name, sex, alignment, class. Then you randomly roll stats for them, strength, dexterity, intelligence, charisma, etc. Then you choose what they each look like on the battle field (crap graphics, but hey, it's customizable)
- You go through the game by traveling around on the world map, hitting random battles here and there, and visiting different places of interest. Each place of interest results in the world map being replaced with the map or first person view of the area you have entered.
- The story presented to you is completely text-based, but it is accompanied by static graphical portraits and other static graphical scenes. You are often given choices of how you want to interact with people or what you want to say
- You gain experience for battles and other various things and you can train your characters to level them up
- There are many many items in the game. Tons of medieval weapons (melee and ranged), tons of different types of armor, rings, necklaces, bracers, boots, etc
- You have money in the game stored as platinum, gold, and some other precious metals, and jewels and gems
- There are 3 main interfaces. The main travel interface, the battle interface, and the inventory interface. Although 3 screen-shots would make this extremely simple to explain, I don't have those, so here's what I can say about the interfaces:
1. Main travel interface - has 3 windows in it. The top left view shows where you are at, either a top down map view or a first person view (like a fps, but not real-time). To the right of that is a list of your characters with hitpoints and armor class. Below both of those things is a big text window, where all the information you'll ever need to know shows up.
2. Battle interface - This is the most fun interface. First off, everything is turn-based. Your characters and the enemies are shown on the map. You use the keyboard for everything. Each character has a bunch of different things they can do. Move, attack, cast spell, aim, inventory, guard, end turn, etc. When you aim on someone it gives info all about them (name, hp, status). The graphics here are very dated and not smooth at all. Very choppy, but what do you expect from such an old game, right?
3. Inventory interface - a list of your items or a shopkeepers items. If it's your stuff it tells whether the items are equipped or not. If it's a shopkeepers items, then it tells the price.
4. There are a few other minor interfaces not worth noting here

Since the interface/engine is nearly identical in most of the AD&D games by SSI, the only thing that really differs that much between the games is the storyline, available spells, items, enemies, characters, difficulty, graphics, sounds, and the length of the game

**Storyline**
It's been a long time since I played this game, so I don't remember the storyline perfectly, but I do remember it was pretty good. I know there is some jerk and he is quite powerful and he wants to destroy the city of Phlan, and take over the world or something like that. After he does destroy Phlan you pretty much are left to your own devices, but you are supposed to try to figure out what the hell is going on, what that jerk is up to, and how to stop him. There are a number of factions. The ones in league with the head honcho guy. There are dark elves that are usually douchebags. There are undead. There are creatures. There are city guards. The list goes on.

On the world map you travel around looking for things to do and places to explore. There are some towns, where you can talk with people, and rest, and buy stuff, and so on. Then there are some fortresses where you are not so welcome. There are caves, ruins, and other little places to check out too. A lot of places are not marked on the map so you have to just randomly explore.

**Spells**
Pools of Darkness has the most spells of any of the AD&D games that came before it. There are 9 levels of magic-user spells. 6 or 7 cleric levels of spells (if I remember right). Then there are some druid spells too. Two levels I believe.

Unlike some of the previous AD&D games, the fireballs and ice storms actually graphically show up on the battle screen when you cast them so it isn't a mystery what the blast radius looks like. If you've played one of these AD&D games before you'll know what I'm talking about.

The big difference in Pools of Darkness is that there are magic items galore. You start off with magic stuff in the beginning of the game. Long swords +1 are super common for example. Normal items in this game are practically junk.

There are a lot of unique items, meaning things you cannot buy anywhere and you only find them in certain specific places.

The graphics for the monsters are very pixelated and dated, but for what they had to work with, I think the developers/artists did a great job. When you are looking around on the battlefield for whatever attacked you and you suddenly see a pack of red dragons or whatever hidden in a corner, it can give you that "oh s***" feeling.

**Characters**
Your characters never have lines in dialogues, so you don't get to know them really. You have to role-play for that I guess. But there are many other characters in the game. Some of them you get to liking, others you think of as total douchebags. The character development is not amazing, but it is quite decent for the time.

**Difficulty**
You can change the difficulty anytime throughout the game. This really just lowers the enemies stats on the battlefield which certainly makes it easier.

Overall though, if you are playing on not the easiest difficulty, but rather one or two steps above that, this game is actually quite tough. You will find yourself reloading your game occasionally after having your team totally nuked. It got a little frustrating at times, especially if I hadn't saved in a while, but it wasn't too bad. The game was beatable.

**Graphics**
For the time period I thought they were pretty nice. All storyline aspects are text-based, but when you are attacked you usually get to see a portrait to give you a clue as to what you're fighting. The enemies on the battlefield are clear enough that you can always differentiate one type of enemy from another easily, but again, very pixelated. I think this it is like 640x480 resolution this game plays on.

The first person view of your travels is not very good. I prefer the map view when I have the option. All the hallways and rooms of a certain area have pretty much the same wall texture everywhere. It is so monotonous in this respect you practically have to memorize how many steps you took in a specific direction so you can find your way back if you don't have a map. But again, for the time, not bad.

My advice for this aspect is to search for screen-shots of this game.

**Sounds**
I always just played with the pc speaker sounds, so the sounds were pretty terrible. It was odd beepish type noises. I didn't think they were annoying, and they were distinct enough noises for different battlefield actions that it was clear what was going on. Pools of Darkness actually did have a digital sound option too. I heard those sounds before, but didn't play that long with them (I reverted to the old sounds) although other people are likely to enjoy them more. An attack actually makes a sword hitting sound. A miss sounds like a miss.

Overall though, the sounds in this game are few and far between. It's actually a very quiet game.

**Length of the game**
This is a very long game, if you take your time especially. There are tons of places to explore, lots of leveling to do, and many missions to take on. I must have played this game for 3-6 hours a day for a month before I beat it, but I did take my time. So, for me this game lasted over 100 hours.
Load Comments (0)