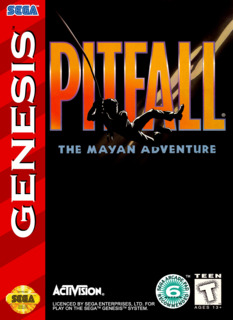 4.3
Poor Check out the review

Great, my first video game I had for my NES. Great game, BUT NOT 4 THOSE WHO HATE ARCADE STYLE GAMES.

User Rating: 8.5 | Pitfall: The Mayan Adventure GBA
By Cradleofbodom | Review Date: November 26, 2007
I remember getting Pitfall the mayan adventure many many years ago for my NES, and my pc. The NES one fried a few years back and I lent the pc version to a friend who moved. Then I was all alone, no pitfall. THEN THEY MADE IT FOR GBA! WOOT!

The game is not for those who expected a big game full of hours and hours of entertainment of new content, but for more of those who enjoyed it earlier on and other classic games like the old indy jones and even early crash games. In the game your trying to save your dad who got carried away from some big giant, you have to go threw a few lvls to get there, most are quite hard if your playing for the first time. In the lvls you must fight many things including spiders, evil vodo statue things, bats, demons with boomerrangs, skeltons and more. The bosses are usualy a challange, unless you know the secrets to get by them. Also, you can collect letters that spell pitfall, these at the end of the game will total up ur score higher (like I said, arcade style) and make your dad look better when you save him. There are also a few little mini games in it that are quit entertaining, but rather bassic. Overrall a good remake of the classic, but NOT for those who didn't like NES, or classic arcade style games.
Load Comments (0)