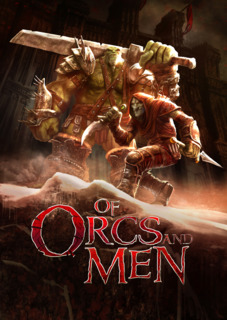 Of Orcs and Men

potential let down by a short game shallow on content and generally a rushed game.

User Rating: 5.5 | Of Orcs and Men X360
By deactivated-61d91d42c39df | Review Date: January 18, 2013
it's hard to place "orcs and men" into a category, it seems to want to be alot of things but doesn't really end up doing anything. It's really a stretch to call this game an rpg since there are really no choices you can make that have any real effect, and the upgrade system and talent choices are very minimal. It's like saying FPS are rpg's now because you can choose your loadout and upgrade scopes etc. it's not an action game since the combat is basically like KoToR where you just queue up 4 attacks then just wait. There is some choice about what type of attack you use but generally you are just using the AoE clearing attack since you are mostly just fighting groups. This isn't a game that has combos or is a button masher just as a forewarning.

It's a fairly short game, 12 hours max and really no reason for a second play through, no mutiplayer/unlockable and it's a linear journey all the way through on small maps with no exploration or town hubs to visit. The store sells literally like 3 or 4 items and items can only be upgraded once.

The AI is really lacking, you can scout ahead with goblin and pick off lone guards and patrols will walk right past their bodies and raise no alarm. You also need to issue commands to both your orc and goblin in battle, you can't just play one and hope the other one will be efficient as the AI of the character you aren't controlling will only pick 1 attack out of about a dozen and isn't helpful and will just end up dying.

Sound is passable, music is not even worth mentioning though, there's also a large amout of profanity in the dialogue with I think detracts from the story. The orc and goblin are decently voiced and have some amusing dialogue, they are about the only interesting thing in the game. The story is ok, generally predictable about betrayal, just have no expectations and you won't be disappointed.

The game actually has quite a good graphics engine which is crisp and realistic, the orc and goblin models are very high res but they didn't
seem to have spent as much time on the human models which look kind of daft in comparison. There's small but noticeable graphics clipping though on some of the characters clothes in some cut scenes which again just seems like a rushed job to finish this game. I had no issues though with bugs or crashing or any quests not working.

overall this game just feels like wasted potential, either they had budget constraints or time issues because the story concept is kind of different since for once you are taking the orcs point of view against the humans. Would only bother with this game if you are really into fantasy type stuff and will play anything and only when this game is in the bargain bin.
Load Comments (0)