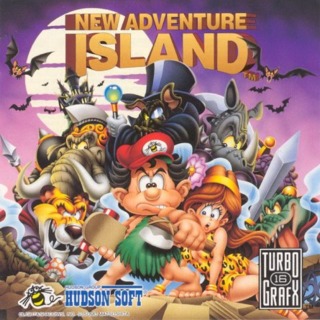 Video game challenges don't get much harder than this! :idea:

User Rating: 9.5 | Takahashi Meijin no Shin Bouken Jima TG16
By 4EverGreen | Review Date: February 10, 2012
I'm often surprised by how funny life works. In 1992, when this video game was originally released (but I was completely unaware of it), I had this strange dream that I was immersed in some kind of weird experience filled with a lot of rocks, monsters, fire, and a lot of jumping challenges. Fast forward to 20 years later, I try this game out on the Wii Virtual Console, and I find out that by playing this game, I realized that I was DREAMING about playing this game! :shock: It just goes to show you that sometimes life is stranger than fiction! :idea: In any case, "New Adventure Island," is kind of an update of the original "Adventure Island" video game found on the N.E.S.; it's got better graphics, better control, and is a bit more forgiving than its 8-bit predecessor. But don't let that statement mislead you; this game is just about as hard as nails, this game requires fast speed, several precise jumps, and the ability to recognize the pattern movements of the many different enemies that try to attack Master Higgins who is trying to rescue his fellow island residents, as well as his blushing bride to be. There are six levels with four stages and one final level with one stage, each level and stage is practically more challenging than the last, with quite a few different environments to go through. Thankfully, even when Master Higgins loses all of his life (which, believe me, will probably happen quite often) the game provides unlimited continues and the player can pick up right from the stage of the level where they lost all their lives. The game is a challenging one, but a very rewarding one to finish. And with a price that's worth only 600 Wii points, it's a very good price for a very challenging game! :D Enough said, true believers! ;)
Load Comments (0)