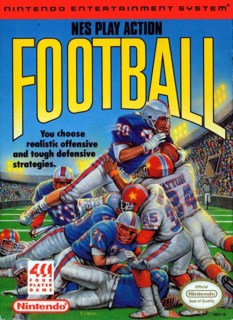 User Rating: 8.5 | NES Play Action Football NES
By kepabar | Review Date: September 13, 2007
I'm probably in the minority of people who first think of NES Playaction Football when they think of classic football games on the NES. The king of NES football is obviously Tecmobowl, but I've always found NESPAF to be the superior simulation. Not only did it have real players (as did Tecmobowl), but it also had substitutions for personnel (since they could be injured), and even the back up personnel were actual players. Did I mention that each of these players had a portrait of them everytime it showed who completed the play? A minor detail, but remarkable for an NES game nonetheless. Then there is the play selection: On offense you have at least 12-16 plays, which can then be reversed effectively doubling your playbook. That's a long way from the 4 offered in Tecmobowl. Add that the "playoffs" which actually just make you play every team straight, and you have a great NES football game.

It's not as fast-paced as Tecmobowl, but it's much more realistic. Unfortunately, the Wii version, just like the Wii version of Tecmobowl, has lost the license to use actual names on the players. Still, it's funny to see Brent Jones (one of the whitest guys to ever play tight end) named Yamataki and Joe Montana named Prada. Good times.

Seriously, if you're a fan of classic football games, this was the first complete package with many features packed into it that didn't come out for years later in the Madden series. Try it out.
Load Comments (0)