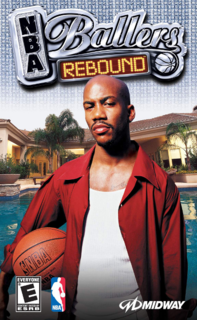 HOW COULD YOU HATE ON THIS TITLE !!!!

User Rating: 9.7 | NBA Ballers: Rebound PSP
By fry112 | Review Date: May 15, 2006
ok First off these people on gamespot are so annoying its so 1 sided its not even funny, if a game doesnt have geekability then its not rated good ,
Yo some people like games like GTA,Nba ballers, And madden but for some reason gamespot makes sure they dont give these games good reviews ..

Well now to the gameplay, THIS GAMEIS HOT!!!
the graphics are the best ive ever heard the movements are just awesome, they really did good with this one
there is only one bad side to the game and thats the fact the game is hard as hell, it takes you back to the day when "Nba live" would cheat and it would make you wanna throw your controller, But you cant be throwin ur psp , point is ,is that the game has its moments when it cheats ........
Also they shoulda added some girl ballers kinda gets a little gay dressing up a dudes the hole game and they even have a special were u can pick your friends and guess what ?? there all dudes , were are the chicks in this game .
alsi this is a very long game !

Also i thought i would throw this is

HOW IN THE HELL DOES "DAXTER" BEAT "GTA"

gamespot thats just stupid , they need to rate the games solely on what the people say or hire me on the review team because they dont play these game enough to get the right rating out of it