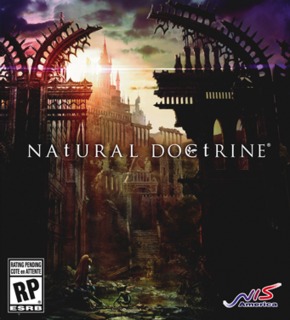 Natural Doctrine is a story about....it takes place in...lets face it the story of Natural Doctrine is as simple as it gets. A mercenary group lead by the fearless/angry Geoff; encounters trouble on a job that ends up turning into a crisis that could lead to te deaths of many. The story is simple, and is something I'd expect from a drunk night of playing Dungeon's and Dragon's close to the end of my buzz. The game doesnt set itself up as an epic tale of Geoff, and his comrades in pursuit of knowledge of the unkown, because that would actually be worth playing if that idea came acrossed.

Now graphics arnt everything, and that is very apparent in Natural Doctine. Natural Doctrine is ported acrossed three game systems so the console versions tend to lose luster while the Vita looks to be closer to PSP title. The characters have decent color pallets while the game's enviroment is very box like that contains serveral grey's, black's, and brown's that tend to show off the enviroments to be very cold, and dank. The most colorful thing though are the several lines, and text boxes constantly shooting acrossed the screen reminding the player of the pairing system that is apparent in the game while attacking foes. The game's only areas that show off the enviroments are limited to battles while the rest is set on a map that displays all the areas as points of interest that glow so often to give an idea where to go. Here you find the character building that is set for the party hidden in the menu. The character progression in levels is very interesting, because it focuses on a skill tree set for each character that at anytime the player can remove points they previously put into a stat or ability, and then add it to another. In turn making the characters in the party opened to several possibilities whether that may be a tank like set of skills for a character to all out offence. The weapons show up on the characters after acquiring new ones, but there are far and few between that look very different from the standard short sword, but when there is it is a drastic difference. For instance Geoff uses swords and firearms. There is sword that he gets pretty early that is the cross between something an angel would use, and a lightsaber. Granted that isnt bad, but I found myself wondering where the variety like this is located in Natural Doctrine, because my focus may have changed slightly if that were the case.

The gameplay for Natural Doctrine is not for the faint of heart or the easily angered because this game will make its players angry right from the start. The game tries a little to explain the convoluted battle system that is paring up against enemies, and attacking them for extra damage. The closest I can find to this type of battle system is that of Fire Emblem: Awakening where the units can "link up," and can fight the same enemy together giving each other bonus effects. This part I enjoyed as a player, but then grew to not care unless there was a boss in the tile adjacent to Geoff, because usually there are just so many enemies on the screen that the best option is to try and kill them all then linking up to attack one at a time. I once heard this game was like Dark Souls, but as a strategy RPG game. Part of that is correct anyway. The game is cheap, because it plays with the players inexperience with the rules, and constantly pummels the living crap out of them until they learn not to open a door randomly that for some reason has a troll in it that is able to wipe the entire party out in one hit. After several battles I was able to grasp the battle system, and was able to get farther, but what it boild down to was to gang up on one enemy, and wail on them to death or to try, and hopefully clear a room while being shot at from all different directions. Another thing that peeves me is that in the game is the magic system is based on a material called Pluton that is harvested from treasure chests, and various items. Pluton is the lifeforce of magic, and is what gives the characters in the party able to wield it a purpose. The only problem is that it is scarce. Pluton is worth more than any worldly possesions, because when it is around it can heal, and deal massive amounts of damage, but as many things in this game it is also far and few between that the player will experience this. Might I add that if any of the party memebers, and I mean any fall in battle. The game is over, and the battle must be restarted. So as a player; if there is even a single mess up; it can, and usually cause a game over.

Natural Doctrine is a game that evokes difficulty in all things. That being gameplay to even understanding the story, and wondering why there is even a point to playing this game. The game's strong points are way to far, and few between to even pass the game's hardships. The story is pointless, and non existant while the gameplay has little to no reward to the player after an hour to hour, and a half long battle. Now to say the game is "too hard" is not true. There is a difference between being hard to being cheap. As a consumer, is this game worth buying? Not unless you are someone that is only into strategy, and would love to have your patience tested. Sadly as someone that loves the Strategy RPG genre it is hard for me even to reccomend this game to anyone.