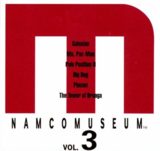 Namco Museum Volume 3 has some of the most iconic video games of all time.

Namco Museum Volume 3 was released on the PlayStation 1 in 1997. The arcade games that are available in this collection are Ms. Pac-Man, Galaxian, Pole Position II, Dig Dug, Phozon, and the Tower of Druaga. Out of all of these games, Ms. Pac-Man and Dig Dug stand out the most as some of the most iconic video games of all time. However, Phozon and the Tower of Druaga can be pretty difficult at times.

Presentation - This game takes place in an actual museum where you can view different magazines, pictures, history and high score records, listen to all of the sound effects and music from each game, and play all six classic Namco arcade games. I will briefly explain about each video game and give a verdict on how good those games were at the time.

First, Ms. Pac-Man (1982) is a sequel to the beloved Pac-Man (1980) where you eat up all of the small pallets while avoiding all of the ghost that roam around. However, there are four large pallets that when you eat them up, all of the ghosts temporary turn blue. You can eat them up while they are blue, but it doesn’t permanently get rid of them. In fact, they just return to the box in the middle of the maze and they begin to roam around again. Once you beat level 2, Ms. Pac-Man and Pac-Man meet up with each other. From level 3 and on, the ghosts move a lot faster than they did in level 1 and 2. Ms. Pac-Man is one of the best Namco arcade games of all time.

Second, Galaxian (1979) is an outer space game where you use your rockets to shoot the objects that are above you. Be careful because sometimes they fall down and will try to take down your life. Galaxian is a fun game to play, but the game is a little bit too simplified where there’s not much going on.

Third, Pole Position II (1983), sequel to Pole Position I (1982), is a racing game where you try to beat the time limit/score and try to avoid all of the cars on the road. The controls can be a bit loose at times especially when you’re turning around on large curves. If you drive too fast, it can cause you to crash and lose your precious time often. There are also four different tracks to race on. Pole Position II is a fun racing game to play, but the control problems drag the score down a bit.

Dig Dug (1982) is an all time classic, and is one of the best Namco arcade games to exist. You play as Taizo Hori, who uses his pump to blow away all of his enemies. The object of the game is to eliminate all of enemies while you dig on the ground. Be careful, since there are 2 enemies hiding in a small area at times. After a while, the enemies move up from the ground and they try to escape from you. Occasionally, there are different fruits to collect. The fast paced music only plays when you control Taizo. Dig Dug is a lot of fun to play, and I definitely recommend fans to play this game with friends.

Phozon (1983), the same year that Luigi became Mario’s brother, is a scientific (Chemistry) video game where you use your molecules to match up the proper positions as it’s shown on the center of the screen. However, at the same time, you must avoid the groups of balloons that roam around, and they occasionally get rid of your molecule pieces. Level 1 and 2 are pretty easy, but level 3 is where the game gets hard. You have to match up the molecules right in the middle on each side of the molecule. Once you beat level 3, there is a bonus game where you move around and shoot the balloons. Level 4 is easier than level 3, but level 5 is so complicated that it’s almost impossible to beat. I find that Phozon is a frustrating game to play once level 3 begins. Overall, Phozon is a frustrating game to play and the complexity of it does take the fun out of playing this game.

The Tower of Druaga (1984) is a maze game where you play as the knight, Gil to rescue Ki (who is either his sister or his girlfriend) and defeat the boss on level 60. The objective of the game is to collect the key and to get to the door before the timer runs out. You can also collect different treasures as well, but it will waste the time limit quite a bit. There are several different enemies as well. There are green and black slimes roaming around that are easy to kill with simply pulling out Gil’s sword. Then there are blue knights that require you to move back and forth with Gil’s sword to kill them. However, the wizards are one of the most annoying enemies in the game. They pop out of nowhere and can kill you by surprise. I don’t know how to avoid or kill them yet. Out of all of these games, only Tower of Druaga and Pole Position II have a time limit. Overall, The Tower of Druaga is a fun maze game to play only when those stupid wizards don’t come out to kill you.

Graphics - The graphics are a bit polygonal and pixilated, but they are pretty decent looking for a PlayStation 1 game. The arcade games themselves look true to their original design. You can also use the dip switch to change some of the rules of the game and can even give you extra bonus points or lives sometimes.

Sound - The music is absolutely amazing for all of the Namco arcade games and even the museum themed tracks to listen to.

Game play - The controls are precise for every game except for Pole position II.

Lasting appeal - You can play most of these classic Nameo museum games almost endlessly and will never get boring or dull to play except for Phozon. All of these games have a 2 play multiplayer mode.

The Good - Ms. Pac Man and Dig Dug are some of the most iconic arcade games of all time, actual museum for you to explore

The Bad - Phozon is a dull and frustrating game to play, and is the worst game on this entire collection, the controls are imprecise on Pole Position II