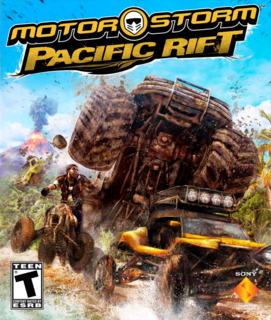 An awesome game, is it an awesome sequel?

User Rating: 8 | MotorStorm: Pacific Rift PS3
By minimme | Review Date: November 1, 2009
Motorstorm: Pacific Rift is a fun game that expands on its predecessor not gameplaywise but in about every other way possible. The origional Motorstorm was great but it just felt a bit raw because it only had 8 tracks and no offline multiplayer, it seems like the developers listened to the fans and put in 16 tracks and a 4 player split-screen multiplayer.

The split screen multiplayer feels like it was just threw in to the game at random, because the fans wanted it, so the graphics are worse but it is still awesome, nevertheless. It has two modes, race or elimination.

Race is what you'd expect... it's a race, elimination is where the person at that back get eliminated after a certain time (in which the host chooses) which is quite fun.

There is also online multiplayer, which is pure fun, with 5 ranks and 3 stages in each rank, this keeps you playing because there are unlocks and a few trophies involved.

I think I'll just take a paragraph to talk about the trophies, they are extremely hard to get. Maybe it's just me but I found the whole game rather hard.

In the festival mode (single player), you can do races, eliminations or time trials. It is set on a tropical island. All of them are really hard after you get to rank 5 or 6. There are 8 ranks and you travel through them as you get 1st 2nd or 3rd in the races, although to finish the game you have to get all 1st, so 2nd and 3rd places are just pointless. It gets a lot harder as you go through the ranks, and I mean a lot harder. There is even a silver trophie for surviving one race in rank 8. This is because the AI are too smart and aggressive so they always ram and punch you.

Punching and ramming is fun, you press R1 to punch (with a bike or atv) or ram (with everything else) to your right, and L1 for the left. The heavier your vehicle is the more successful you will be with this.

They kept the same set of vehicles and added another one in, now there is the bike, ATV, buggy, rally car, racing truck (ute), mudplugger, 'big rig' (a truck) and the all new monster truck! These are all quite usefull in different tracks and areas on tracks.

The tracks are amazing, one of the best strengths of the game is the level design. There is almost always at least two ways to go, each better or worse depending on what vehicle you are using, so if you don't like one vehicle, just use a different one and go a different way, it all works out.

The gameplay is the same as the first one, which isn't bad. They went with the 'if it's not broken, don't fix it' method and it worked well, it just feels repeditive if you've played the first one. If you don't know, in the game you go fast, and get big air. Thats pretty much it. There is also a boost bar which you can use if you press 'X', this makes you go faster and you have unlimited boost, which is nice, although they obviously had to limit you somehow, so the bar tells you when your boost overheats. If it does, you explode and go flying forwards, then you reset, this is good for getting over the finish.

I'm not a big fan of the whole 'water cools you down, fire heats you up' thing going on. This is where they tried to make it different from the first one by making it that if you go through water, your boost bar cools down and goes down faster, and if you go near fire or lava, your boost bar goes up faster (when you boost) and down slower.

One of the major problems about this game is that it sucks at rewarding you. When you finish levels it feels like you have achieved nothing, I think you should unlock all levels later on in the game, instead of just having them all at the start. You do unlock paintjobs and characters to use in race but they are useless and add no difference to the gameplay. It also has trophies but I've already talked about them.

Overall Motorstorm: Pacific Rift is a game you should almost definately get if you haven't played or don't own the first one, but I do, so it's a bit repeditive.