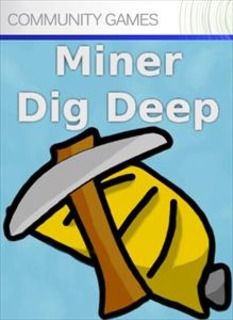 Miner makes for addictive gameplay that will keep you digging for more. Top ten indie-game for sure. Don't miss it!

User Rating: 8.5 | Miner Dig Deep X360
By TechnologoDoom | Review Date: January 26, 2010
Miner Dig Deep, by indie-game developer Robir, is definitely one of the best indie-games xbox live has to offer. Its easy to get in to and hard to put down - the mark of any solidly put-together arcade-type game.

As other reviewers have noted, Miner was made in the image of Dig-Dug and other forgotten classics of yesteryear. The premise is simple: You are digging for treasure that you can sell at the local store for better equipment, tools, and mining supplies to help you dig even further into the ground. While you dig you need to watch out for caveins, falling rocks, or getting trapped in a hole (of your own device) - all of which will send you to the surface without the precious metals you've collected. What Miner does well is offer instant gratification for your explorations, as well as offer basic but need assistance through the storefront - a simple component that is often lost on indie-game developers who don't understand how upgrading is so important to personal investment. Since other reviews do a fine job of giving a solid overview of the gameplay - let me simply say that the pacing here is quite good and the game exudes a "one-more-trip" type of feeling that will keep you hooked.

Aesthetically, Miner Dig Deep doesn't offer a whole lot in terms of spectacle, but this isn't a game you're going to play for graphical detail. The constructs are basic and icons do a fine job of indicating what you're interacting with. The earth is brown and boring for the most part (as you go deeper you will encounter slightly different layers, like an ice layer, but it does't last long) - which is only slightly disappointing since a deeper aesthetic focus on diverse rock-strata would've been a visually compelling component and also could've impacted gameplay to a greater extent too. Brown does get boring. After playing for 10 hours, say 400-500 feet deep, the brown gets repetative to say the least. With that said - the game doesn't require much aesthetically to be compelling since the gameplay itself does most of the leg-work here. But, it is a negative for sure and detracts from the amount of time you'll be willing to dig.

Bottom line: if you're looking for an addictive, inexpensive game you MUST give this one a look. Its worth far more than the 240 MS points it costs - and I'd be shocked if you were disappointed.