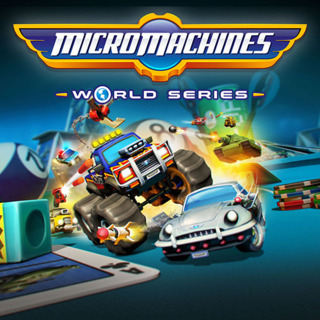 Micro Machines have been around since the mid 1970's and were a massive trend from the late 70's to the mid 90's, the miniature toy cars were well detailed on various cars, trucks and planes just to name a few and some based on various movies and TV shows as well. Codemasters were very well known for developing the game in the past especially when you had the option to play up to eight players on either Micro Machines 2 or Turbo 96 on the Sega Genesis, this is what is I loved about the Micro Machines franchise on the Sega Genesis for its memorable race tracks, multiplayer modes and the option to make your own tracks.

When I heard the news about a Micro Machines making a comeback to consoles, I was surprised but was curious to see how well how good it was and hoping it would have been great for it was back in the 90's. The last Micro Machines game we've had was back in 2006 and since then there hasn't been a new game since then but looking at World Series left me both feeling nostalgia and a little disappointed at the same time. Not only Codemasters were behind development on the PC version but Just Add Water were behind the development on both the PS4 and Xbox One version, not saying that's a bad thing; I think Just Add Water did a great job keeping the graphics visuals well detailed from the top down view on the levels used are well done from racing around the pool table to the breakfast table every little detail makes it the reason why the game can be addicting for the first few hours.

The problems that it kind of has is that it's going for more of the Overwatch trend each time you level up you'll gain a loot crate box which will contain at least four items from custom skins for each of the vehicles, catchphrases, play icon and title name. Once you've reached Level 10 you'll be able to take part in Ranked matches but it focuses way too much on the multiplayer both online and offline, it doesn't have a main campaign mode or has any challenges for single-player but all it offers is a tutorial on controls but you can play up to four players offline and that's pretty much it. Looking at the online mode is where the game can be fun but all matches and races are over quickly and having to wait a few seconds to join the next match or race.

You'll have multiplayer modes like Elimination where the first one reaches the finish line wins just don't fall behind, you've got Race where you'll be racing around a track with a good five laps but you'll also be using weapons against other racers using Nerf items like a nerf gun, nerf bomb and nerf hammer but you don't get any other items in the Races like boost or shield which we've seen before in past racing games. The other mode is Battle where you'll get most of a challenge where you'll be in a random match of either Capture the Flag, Pass the Bomb or King of the Hill but whichever vehicle you choose to play as will have their own abilities and weapons which you can use against other players. So, it can feel like something Overwatch but instead it's in tiny vehicles.

Each of them will have different voices to whichever character you use in either mode or race but the real star in Micro Machines World Series is Brian Blessed which ever rank you come in or playing a Battle with other players you'll hear his voice in the background. The gameplay controls can take a little use to at first and can feel a little loose depending on which mode you end up choosing when it comes to both online and offline but it also each mode you end up finishing you'll be take back to the menu and you must jump back in again to join in you can't stay on the same mode with your friends or with players online. Even when playing World Series using Remote Play on the PS Vita can struggle with the 30 frames-per second but the option is still there if you want to play World Series on the PlayStation Vita, it does have trophy support which makes it another reason why you would want to come back to the game.

Overall the graphics and visuals look impressive to look at especially after it's been that long since we've had another Micro Machines game in general. You can play up to twelve players online which can make the game fun at least but half the time it can get very repetitive whichever mode you choose and can take up to more than five hours if you want to reach up to Level 20 but the more you spend time playing World Series you'll be able to rank up quicker. There is also Special Events as well if you manage to win the event you'll be able to get a Loot Crate box but if don't or miss the Special Event you'll have to wait at least five days for the next event. For the price, you are paying for Micro Machines World Series isn't too bad to pick up but hopefully they'll be future updates and DLC content for Micro Machines World Series but if there isn't any you are going to feel a little disappointed seeing how the classic miniature toy cars were a huge hit as toys and games would be better off staying in the past in trying to keep up with the modern-day era in gaming.