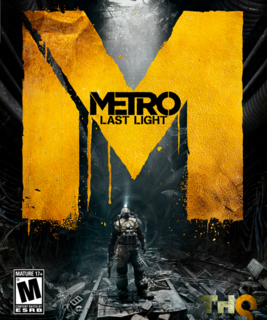 I bought this game immediately after finishing metro 2033 and was pleasantly surprised at how much the graphics had improved. The story and game play are really wonderful in metro last light, partly because they re-create the creepy surroundings from stalker but with so much more detail and choreography. I had a tremendous amount of fun playing the stealth solder as most of the time the game gives you lots of room to really test your tactical skills. You have to make use of all types of weapons and different levels of cover and shadows to get the most kills per shot, all while managing your ammo supply that's largely gathered from dropped weapons. The game can be so fun until you hit one of its flaws:

1) There's no option to skip exposition scenes, and they can take minutes to play out. You're amped up for combat but then the game stops dead for 5 minutes as a bunch of characters blather on. This happens far too often.

2) The constant need to replace gas mask filters really detracts from above ground combat. When I'm in a scary situation I want to take my time and really scour the area for better vantage points and weapons, but then that stupid alarm goes off and you see you've got a minute of air left. If you ignore it you run the risk of running out with no way to continue from the last checkpoint, so you have to start a chapter over.

3) The boss battles provide no real tactical challenge, they're just repetitive and waste lots of precious ammo. Each character has some obvious weakness that you have to exploit 3 or 4 times so you can kill the stupid thing and move on to something fun.

If I do replay this game I'm going to have to use a trainer because I just can't stand these three irritating flaws. Without them I'd give this game an 8.