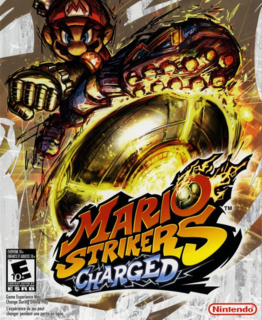 The first online game on wii simply had to deliver and it certainly did that.

User Rating: 9 | Mario Strikers Charged Football WII
By pigfish2 | Review Date: June 7, 2007
Mario strikers charged football takes a sport we all know and love,football and strips it down to the bare bones and then builds a whole new game. But believe me that new game is just as brilliant. There are no fouls; no rules against hand-ball, weapons; super abilities and mega strikes. Lets start by talking about how you play a match. Firstly you choose your captain from Mario, Luigi, Peach, Daisy, Wario, Waluigi, Donkey Kong, Yoshi, bowser and if you've unlocked them Bowser jr, Diddy Kong and Petey Piranha. Then you choose 3 sidekicks from Monty Mole, Shy Guy, Koopa, Dry Bones, Toad, Boo, Birdo and Hammer Bro. You can have duplicates of each sidekick. Each sidekick has there own special shot which they execute when you charge up a shot. When you charge up a shot using a captain they unleash a megastrike which shoots up to six balls at the goalkeeper and the other player has to use the wii remote as the goalies hands to stop the balls. The amount of balls and the power of the balls is decided by where you stop a guage. Then you pick the stadium from a wide selection and the match rules. Once the game has started you play 5 a side with your captain, 3 sidekicks and Kritter in goal. When you are playing you can slide tackle, barge tackle, use items such as shells and use your captains super ability which comes as an item. Mario and luigi's super abilities are super versions of themselves where they grow really tall. A major gameplay mechanic is the way the ball changes colour when you pass it to encourage team play. It changes all the way throughh from red gradually to white. The closer it is to white the easier it is to score. The different game modes are domination mode which is just a one off match or series with one or two players, road to striker-cup which is like a campaign, the tutorial, striker challenges where you have to complete set challenges and of course the much heralded online mode.Online mode works well with just a few minor problems with the servers when they where first bought online. You can play friendly matches against people that you have exchanged mii specific friend codes with or ranked matches against anyone inyour region. Friendly matches can be played worldwide. Ther is an online ranking so you can check where you are compared to other players. Every single mode especially the online mode is incredibly fun but the road to striker cup is very difficult. The graphics are very good and so is the sounds of the crowd and everything else. Overall the game is an excellent one and a great introduction for the wii to online gaming.
Load Comments (0)