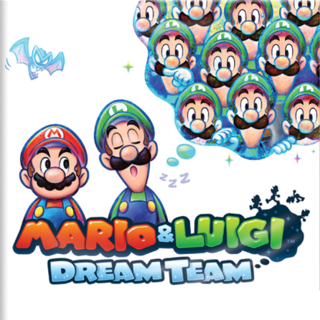 User Rating: 8.5 | Mario & Luigi: Dream Team 3DS
By BorosandJerk | Review Date: August 31, 2013
Boros here, and reviewing the next to last installment in the year of Luigi promotion that Nintendo has going on right now. The last one will be Super Mario 3D World which I'm not so sure about. But, I'm getting ahead of myself. This is Mario & Luigi: Dream Team. A sequel to my favorite game of all time, which is Superstar Saga. Contrary to the popular opinion of Dream Team, this ISN'T my least favorite out of the series; Partners in Time is. However, compared to the others, Dream Team is pretty weak. To see what I mean, let's just dive in.

The story is that Princess Peach, again, is sent an invitation to a place called Pi'illo Island... Really, did all of your good writers just walk out at once, Nintendo? Anyway, of course, Peach accepts and we see there a whole bunch of familiar faces, like Starlow and the French Block People, from Bowser's Inside Story. Don't worry, though. The Block People are just as stupid here as they are there. Also, you even see some of the unimportant NPC's from Superstar Saga, like the Beanbean people, and the Hooville villagers. It invokes the image of a little kid wearing big boy pants to try to fit in with his older, stronger brothers. "Can I pway wif you guys?" More specifically, the kid stole the pants of Bowser's Inside Story, but we'll get to that in a moment. Anyway, Peach gets herself into trouble and Mario and Luigi have to go save her. Big blippin' surprize.

This would be a good point to talk about the gameplay in the real world. It's a RPG, meaning you run around in an isometric viewed world, and run into enemies to enter combat where you can pick your attacks or flee. It's fine, but what makes the Mario & Luigi series great to me is being able to avoid attacks entirely with proper timing. The downside is that attacks often do way too much damage when they do hit, and especially in boss fights, the attacks are so long and complex that taking the hit just to end the attack is smarter. Also, you can learn Bros. Attacks, which are attacks that require both brothers to use. There way more powerful than the regular attacks if done properly, however, you have to jump through massive hoops to use them properly. Also, they bring back that always retarded mechanic of learning the Bros. moves through collecting puzzle pieces from Bowser's Inside Story. I like the original way, where if you learned it outside of battle, it could be used inside of battle. One thing about it though is that the Bros. Attacks look really good, but that's juat graphics.

Ok, back to the story. Mario & Luigi rescue Peach from the evil... umm... spirits? I'm not sure exactly, but they find a mythical artifact which resembles a pillow, and that prompts Luigi to go to sleep on it when they get back to the main building of Pi'illoh Island. When he does, a shadow jumps out an kidnaps Peach, by pulling her into Luigi's dream. Mario jumps into Luigi's dream after them.

This would be a good time to explain the dream world gameplay. It's a 2D version of the real world gameplay, except where in the real world, there is both Mario AND Luigi, in the dream world, it's an overpowered Mario who can use Luiginary Attacks, which is just Luigi dreaming that there are a whole bunch of himself to attack the enemy with. I don't like this as much for one reason. It's only Mario, meaning that if you die then that's game over. I only died in the dream realm because of this. It's easier to kill things in the dream realm, but at the cost of dying much easier. Also, again ripping of those damned puzzle pieces for the attacks. This whole thing strikes of Bowser's Inside Story, even down to the giant fights, which happen when Luigi dreams he's a giant to protect Mario. It's cool, but if they keep ripping from Bowser's Inside Story like this, then I'll startcalling bulls#!t.

Ok, finally back to the story. Mario corners the shadow and it takes a shape. He says his name is Antasma, but... he's Dracula. He's the king of bats, can turn into a bat, drains power, and can also hypnotize his enemies to sleep. It's f@%king Dracula. Anyway, he escapes, and Mario & Luigi try to track him down. Bowser gets involved later on, because he's the only one who can kidnap Peach, and he ends up teaming with Dracula. So... just to clarify. This is a game where Mario & Luigi have to take on the duo of Bowser and Dracula so they don't take over the world, and they do it by sleeping. Something tells me that wasn't the main pitch. Anyway, that's pretty much the main plot, and everythings fine and all, but I want to bring up something that really f@%king p!ssed me off.

They brought back the battle arena from Bowser's Inside Story, which is cool. I actually liked that idea, BUT the pay off of this one is what p!ssed me off. In Bowser's Inside Story, the final class of the Arena is when you fight everyone you fought in the previous arena battles, PLUS another fight, which was irritating to get through with a turn limit on the whole damned thing. However, the final battle was against a boss not in the rest of the game, and it was Bowser X. Man was he freakin' hard, even just as a regular boss, he would've been hard. His attacks are so nuts, that would make an epic final boss in another game. His meteor shower attack is the most annoying by far. Anyway, with such an awesome fight at the end of the arena in Inside Story, what do we get with this game? The end of the arena is Bowser Jr. Most of his attacks are minigames from the first Mario & Luigi... That's f@&king lame! After busting my ass to get to level 40 to take on the final class, it delivers unto me a big fat middle finger of epic proportions. His attacks aren't even as flashy as yours, and this was when I was the most disappointed with the game.

All in all, it's still a great game, and I'd recommend it, but I'd recommend the others over it barring Partners in Time. It's also long, as it took me 40 hours to beat, so it's well worth the money, just expect a bit of frustration and disappointment if you wanted something as good as the others.
Load Comments (0)