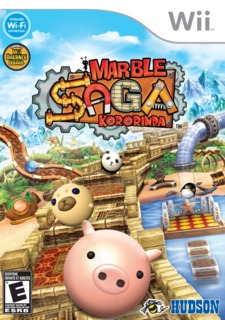 This renamed Kororinpa sequel vastly expands the quantity of content seen in the first game. In “Marbles! Balance Challenge”, you use the remote to tilt the level, which rolls your ball around the course, collecting all the gems and reaching the goal.

There's a story shoehorned in. Anthony the ant requires you to collect Seeds from the levels so he can gain access to the Seed Temple where the Sunflower seed is. Not sure why he can't get them himself since he is an ant and should be up for the task.

Initially, you have a choice of Easy and Normal mode. I think the difference is that Easy has some of the obstacles removed and extra walls in place to keep you from falling. The orange gems are mandatory to finish the level, but the single green gem (Normal mode only) is optional and is usually either placed in a precarious position or slightly obscured. Although it's encouraged to complete the course as quickly as possible, it isn't deemed necessary as in games like Super Monkey Ball. Personally, I prefer this way of playing because Super Monkey Ball sometimes had ridiculous time limits. Obtaining Gold medals unlocks new balls though. So the first time you play the level, you will take your time and have the aim of reaching the end. On subsequent runs, you will be aiming to beat your time.

Like the first game, the choice of balls are strange. You start out with a marble but then unlock a variety of cute animal heads (such as dog, pig, and panda), sports balls (American Football, Baseball) and some other weird objects (planet Earth, Bomb, UFO). Each of these balls handles differently in terms of speed, response, bounce, and slip. Some balls aren't fully round and have more of a irregular movement pattern, the obvious example being the American Football. These differences also encourage the levels to be replayed because it offers a different aspect to the difficulty. I found that the easy balls seem a bit too sticky which makes it hard to get used to. You can stop their momentum almost instantaneously, but it takes a dramatic movement to get them moving again, which feel unnatural.

The early courses are very straightforward and have many walls, but the more difficult stages will have smaller paths with no walls and obstacles (bumpers, icy patches, bumpy paths). Also, there are many stages where you need to turn your remote to the side so walls then become paths; which can be quite hard to get used to. If you do fall off the stage you will respawn back to the nearest checkpoint, but you don't need to recollect any gems you have collected. You can also force a reset by pressing the A button which is helpful when you drop down a floor and realise you missed one of the mandatory orange gems. Reaching the end without all the gems also sends you back to the last checkpoint too.

One problem I found in the game is the camera angle can sometimes be troublesome. Sometimes you may be travelling towards the screen and can't see what's ahead. When the path sharply turns, or there's a moving platform, you can end up dying because of it; so sometimes the levels become trial and error. There were a few parts where I found the depth perception to be problematic which was highlighted by the cannons. The cannons seem to show a predicted path that doesn't match where you are actually launched, and I often found myself flying diagonally when I was sure I was holding the remote flat, and didn't notice visually.

There's 100 dedicated levels if you use the Wii Fit Balance Board. These specially designed levels are often far simpler, and more maze like. Achieving Gold/Platinum medals on these levels is easier because the time thresholds are very lenient. There's a level editor too which I never actually tried out because there was enough content to keep me occupied.

The presentation is much improved. The graphics are much sharper and has wide-screen support (unlike the first game). I'm surprised there weren't more games like this on the Wii given that the console is perfect for them. I think the sequel has addressed the issues of the first game and added new features, so is a fantastic sequel and highly recommended for Wii owners.