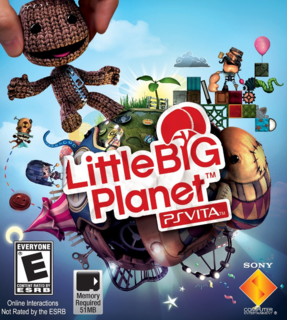 LittleBigPlanet: PS Vita is the same, highly creative, amazing game we've come to love on PS3, and now, It's on the go.

User Rating: 9.5 | LittleBigPlanet PS Vita VITA
By Sackboy_man | Review Date: September 30, 2012
LittleBigPlanet PS Vita has probably been my most anticipated Vita title since day one. In fact, a few years ago if memory serves me right, I had a vision of how amazing LBP would be if it we're a portable game as well. And guess what! In 2009, LittleBigPlanet was released for the Playstation Portable..and, well, I was pretty dissapointed..

You see, LittleBigPlanet PSP was missing alot of the stuff that made LittleBigPlanet so good in the first place, namely, multiplayer. The PSP version lacked ANY multiplayer to speak of whatsoever, not even AD HOC mode. The Create mode was very hard to use for me personally, also, In the PS3 version, there were three layers for Sackboy to traverse in levels, in the PSP version, however, it was stripped to two.

Awkward Create mode, lack of any feeling of community, you couldn't even put custom stickers on your Sackboy anymore! If I remember right alot of people seemed to like LittleBigPlanet PSP but..I can't see why, unless maybe they haden't played the PS3 version prior.

So, needless to say I was dissapointed. But, time went on. In 2011, LittleBigPlanet 2 was released for the PS3 and It was everything that was amazing about LittleBigPlanet 1 and more. From Sackboy AI to custom music creation, from movie creation to the ability to make movies! It was incredible.

Now I don't remember exactly how the story goes but if memory serves me right it was something like this;

The PSP2 was leaked sometime in 2011...I think, and It was said that it was "As Powerfull as the PS3". And I thought that was a load of crap, I was like "There's no way they can jump from the PSP, which is only comparable to the Playstation 2 at best, and make something as powerfull and the Playstation 3. Well, then E3 2011 came around, and this new handheld was officially unveiled as the Sony Playstation Vita, and they showed off some games and well, it seriously did look like a portable PS3, especially one game in particular..

Well that's how I remember how it went, anyway.

Time went on and February 21 (that WAS the launch date, wasn't it?) came along, and I got the Vita day 1. At first, I was extremely impressed; from the thing's specs. But eventually, I got tired of just using the thing as a dang camera and went out to buy a game, which the only one that seemed appealing at the time was Uncharted: Golden Abyss. I played through it and from a graphical standpoint, it was really good. And it was good as a shooter but as an Uncharted game well, eh, it was okay..

So I finished the game, nothing else was really rolling out for the Vita except for things I didn't really want, or two ported games I considered and well, eh no need to talk about this let's fast forward.

Long story short, I wasn't very impressed with the Vita lineup and was mainly using the thing for Skype and YouTube (Since I don't have an IPod, IPhone, etc this was kinda new for me.) and I was patiently waiting for the Big Boss of Vita games, LBP Vita. Finally, the game was released (actually it was apparently released before the actual release date but I'm pretty sure I got it on the *official* date; September 25)

Anyway, I could tell I was in for a real treat when I saw just how much this game was like the PS3 versions. And I was not wrong. The game plays JUST like how it does on PS3, from what I've played and created myself it seems to have EVERYTHIG from the PS3 counterparts (except for dark matter from what I can tell, and online create mode but cutbacks have to be made somewhere I guess.) But still, this game IS LittleBigPlanet on the go, unlike the PSP version which was only LittleBigPlanet by concept and genre at best.

This game had everything the PSP version was missing. Multiplayer, a custimizable pod, putting custom stickers on sackboy, three layers, you name it! And the game of course had all the console tools, so movie creation, custom soundtrack, it's all there. You can even export your DLC from the PS3 games onto the Vita!

The game has proven for me to be extremely addictive, finally, my vision of LittleBigPlanet on the go has come true, and it's darn good. This is everything I wanted it to be (except maybe Online Create's absence..) and It's truly the first "killer app" for the Vita. All I can say is, if you haven't played the console games, or the sound of Play, Create, Share sounds good to you, then please, please please, Get LittleBigPlanet PS Vita, I assure you that you will not regret it.