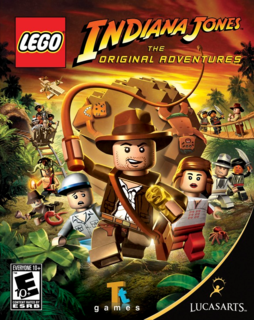 User Rating: 8 | LEGO Indiana Jones: The Original Adventures X360
By nash_latkje | Review Date: October 8, 2011
I'm guilty as charge if you ask me if I say that this game was "children's play". In spite of the cute looks, this game is actually very elaborated and the difficulty level is not exactly "children's play".

Those who have watched any of the Indiana Jones movies will like the game's atmosphere. In this game it is possible to go through the events of the Indiana Jones trilogy in the order you like. The player is not restricted to play only as Indy, since it is also possible choose between different characters from the movies. Each of them has a different ability that can help you solve the puzzles you find along the games. You can either switch from character to character or play with a friend on co-op mode. Too bad that there isn't a online co-op mode, because the game would definitely be more fun if it allowed you to play with friends through XBox Live or PSN.

The controls are simple and easy to be "mastered", although the jump is not always precise. Also, due to the relatively high speed of the vehicles you control through the game, sometimes it's hard to lead it to where you want it to go, but nothing that will frustrate you too much.
The camera is fixed, so there aren't really too many problems with it (even though its positioning may make it difficult for the player to see certain items in the area).

Puzzles and bosses are very well-planned. Nothing too complex, nothing too easy.

Overall, this game is pretty good and, in spite of it not being very long, it is definitely worth a couple of hours of your time.
Load Comments (0)